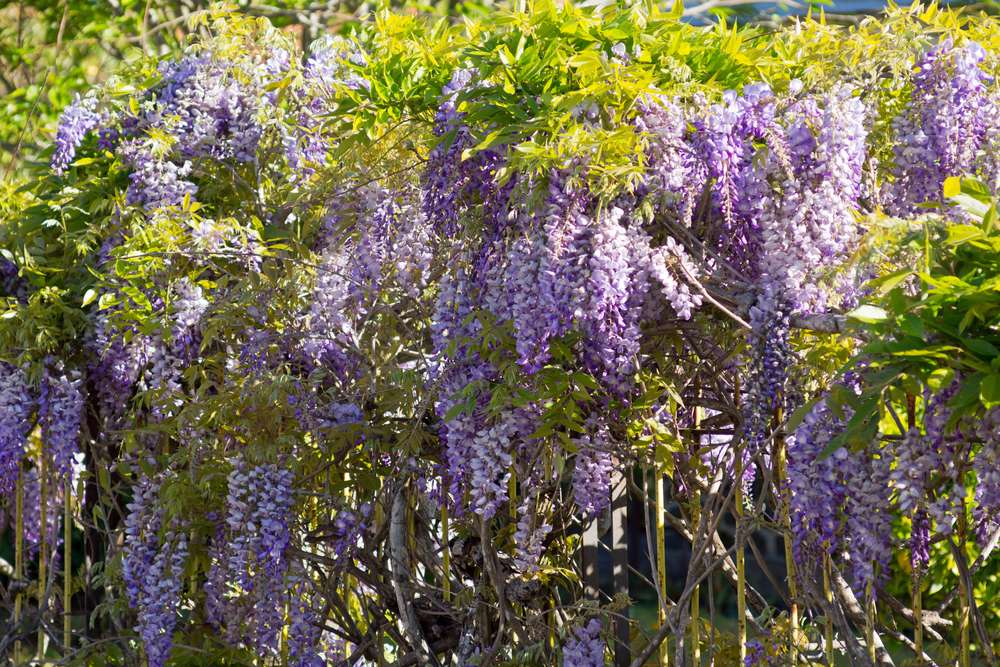 In the article, I review the different interpretations of wisteria flower meaning and symbolism.

Blooming in white, purple, pink, or blue flowers, wisteria plants are associated with a handful of meanings and symbols.

We should mention that they’re usually not associated with a specific month. However, many people often give them as birthday gifts in the months of March and April because that’s when these plants will typically start to produce blooms.

Though a bit on the smaller size, wisteria blooms can be quite charming. They have a strong effect on people and are usually a conversation piece when included as part of the landscaping design.

Another reason you should plant some wisterias in your yard is because they evoke friendship. They have a way of welcoming people into your home with their graceful petals and delicate stems.

While all wisteria colors elicit feelings of welcoming others and friendship, the pink ones work best. They’re often used to represent nurture, care, and admiration.

Adding some wisterias to your floral arrangement, bouquet, or vase evokes feelings of youth, vitality, and good cheer. Their bright purple shades lift people’s spirits and make them feel happier and more alive.

Purple is also often associated with nobility and greatness. So, what better way to say that you admire and cherish someone’s good nature than with some royalty-inspired wisterias?

Another option is white. It’s the color of purity and innocence and is often used to invoke feelings of vitality and positive energy.

Wisteria blooms are often believed to draw out positive energy, strength, and enthusiasm. That’s why it’s often perceived as a symbol of good fortune and luck.

They make terrific gifts to someone about to embark on a new chapter in their lives. It could be they just got married, promoted, or had a career change. Whatever it is, these flowers will convey the message that you wish them all the best in whatever comes their way.

Your best option here is to go with blue wisterias. It’s the color most often associated with hope and new beginnings.

Florists often use wisterias in flower arrangements when someone wants to show how dedicated and committed they are to a cause or a place of business.

The best thing is that they’re not too intimate, like roses, for example. So, you can give them to your boss or a colleague without fear of offending anyone or breaking any codes of proper behavior.

Have you ever just gotten to know someone and wanted to show that you care? Yet, at the same time, you didn’t want to come across as being too clingy or over-sentimental?

You can say all that with a beautiful bouquet of wisteria flowers. These blooms are just the right amount of care and affection without going overboard.

From the oldest wisteria to the largest, wisterias are a magnificent sight to behold. Here are a few interesting facts about wisterias you can share with your friends.

Amazingly, wisteria plants can live up to a hundred years!

Yet, that doesn’t come close to the 1200-year-old wisteria tree in Japan. It’s considered one of the oldest and most noble trees in the world. Still, it continues to nurture people and provide them with some of the most beautiful pink flowers!

When Californian farmers first planted their wisteria vine in 1894, they never dreamed it’d become the world’s largest blossoming plant! It’s now believed to weigh over 250 tons and has taken over more than a whole acre of land in Sierra Madre, California.

It was certified by the Guinness Book of World Records in 1990 as the world’s largest plant. Not only that but it’s also regarded as one of the seven horticultural wonders of the modern world!

The sweet-smelling blooms are safe to eat and are full of flavor. Some people boil the flowers down to make a tasty, floral-scented jelly.

As for the leaves, you can use them to make tea. Yet, it can be slightly bitter-tasting, even after adding a bit of sugar.

Wisteria flowers belong to the Fabaceae pea plant family. This family also goes by the name Leguminosae, which includes legumes.

These vine-line plants were first grown and cultivated in Asia for many years. Then, they were introduced to Europe and other parts of the world in the 19th century.

The original name of this flower is ‘Zi Ten,’ which is Chinese for ‘blue vine.’

The genus ‘wisteria’ refers to five species in North America and Asia and was first discovered by the English botanist and zoologist Thomas Nuttall. Yet, the name ‘wisteria’ was given to these species to commemorate the 18th-century American anatomist, Dr. Caspar Wistar.

The genus wisteria is known for its ability to quickly scale trees, fences, and walls. Their average height can reach up to 40 feet, depending on the species.

Some can also be free-standing, but they’re only half standard, which means they can typically grow anywhere between 10 and 30 feet high. With free-standing wisterias, you’ll need to constantly trim and prune their stems to prevent them from becoming weak at the tips.

Wisteria plants require a lot of care and upkeep. However, with the right growing conditions, these climbing vines can start producing blooms after 3–5 years of planting.

In the meantime, you’ll need to keep a close eye on them because they can get pretty invasive. As a matter of fact, they’ve been known to compromise the structural supports they’re leaning on, as well as take over nearby plants if left to grow out of control.

They typically bloom starting in spring and last until the end of summer. They do well in hardiness zones of 5–9 and some high-grade fertilizer once or twice during their growing season.

Wisteria plants prefer their soil to be well-drained, moist, and slightly acidic. They enjoy being in full sunlight but also do well in partially shaded areas.

Make sure you water them only when the topsoil appears to be dry to the touch. Remember that wisteria plants can suffer from root rot and leaf discoloration when overwatered. So, make sure their roots aren’t soggy and that the soil has adequate drainage.

Unfortunately, wisterias are susceptible to aphids and mealybugs. Other pests that can compromise your plant’s health are borer beetles, scales, and caterpillars.

To keep these pests away, spray the entire plant with an insecticide once at the beginning of the season. Then, repeat every 2–3 weeks.

In addition, these wispy vines can also suffer from Phytophthora root rot, honey fungus, and other types of root diseases. They can also get infected with powdery mildew, which is a type of fungal leaf disease, as well as various types of bacteria.

In winter, you can protect the plant by covering it in bubble wrap or a breathable burlap to keep it warm. Some gardeners use plastic tubing, which they wrap around the main vine without having to cover the entire trellis.

Wrap Up On Wisteria Flower Meaning

So, what’s in a name? Now that you know all the wisteria flower meanings, you have a clearer understanding of the powerful messages these blooms carry.

With their bright colors and aromatic fragrance, wisteria flowers will fill your home with charm, beauty, and grace.