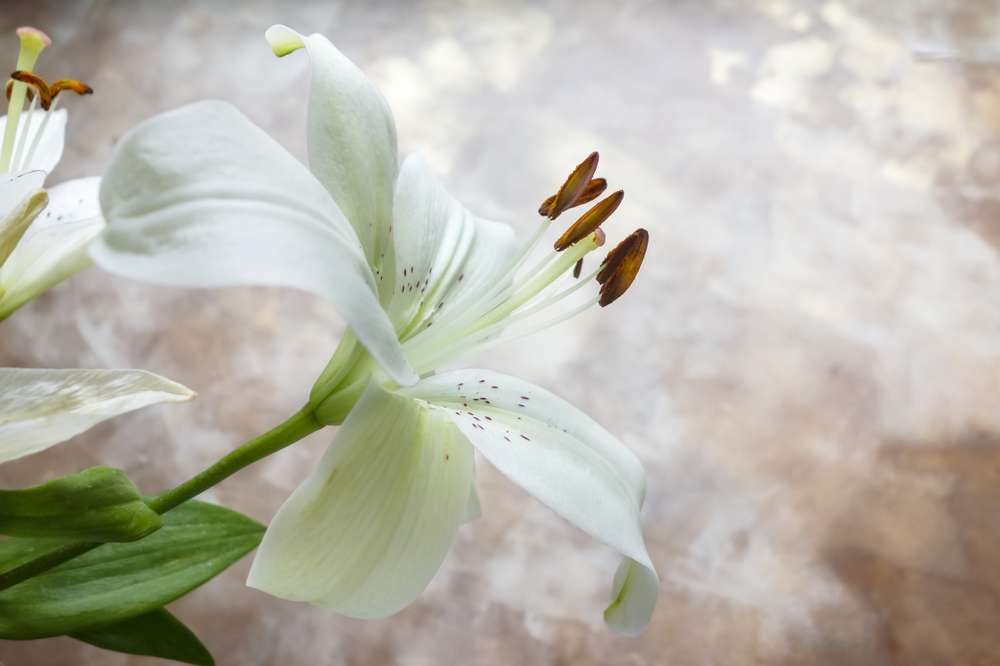 Since ancient Egyptian times, flowers held meaning. They could mean happiness, sadness, and more. One of those flowers is the lily.

Lilies are one of the most loved and popular flowers in the world. Their bulbous shape oozes elegance and grace. They can fit well in any living room space.

Now, lilies have various genera, one of them being the oriental white stargazer variation. Having said that, a white stargazer lily meaning mainly relates to purity, simplicity, and innocence.

Stick around to learn more about white stargazer lilies, their meaning, and how you can care for them.

Stargazer lilies are a gorgeous genus in the Liliaceae family. You might be thinking, “What makes stargazer lilies different from your average lily?”

Well, the main contrast comes from where the lilies bloom. Stargazer lilies look upward towards the sky while blooming. Normal lilies, on the other hand, usually bloom downward.

The physical characteristics of stargazer lilies are similar to most other variations. If you search for stargazer lilies, the most common kind is the pink option. The second choice is usually the white-colored variant.

These lilies are etched with three long, bent, and white petals and three smaller sepals with the same coloration. They’re adorned with pretty dark freckles in the middle. Within the center of the white stargazer lily, six orange-tipped anthers.

Height-wise, the lilies’ stem can go as high as 36 inches. Each stem can hold about two to eight flowers.

You’ll be hit with a strong sweet scent if you’re reaching out for a sniff. The smell can be too much for some flower buyers, so we’d recommend giving them a whiff before purchasing some.

White stargazer lilies don’t hold a particularly rich history, since they’ve been developed in 1974. Leslie Woodriff bred the flower. He cross-bred the Asiatic and oriental lily to make the stargazer lily.

The breeder created the stargazer lily as a progress from the Rubrum lilies. The latter wasn’t as favored by flower enthusiasts since it looks down and has a wilted appearance. After the stargazer lily was bred, several customers rushed to buy the prettier variation.

What Does a Lily Symbolize?

To understand the symbolic meaning behind stargazer lilies, you may want to look at the connotation of lilies themselves.

Several cultures have their interpretations of lilies. For instance, let’s look at Greek mythology. Lilies are mainly associated with the Goddess of Marriage. In ancient myth, the flower was correlated to Hera’s breast milk.

Additionally, the Minoan civilization has depicted lilies in their scriptures and paintings. The flower was sacred to the Bronze Age society. This was evidenced in one of their lily paintings named, “The Prince of Lilies.”

According to excavators, the image portrayed the ruler of Knossos. His headpiece is decorated with peacock feathers and papyrus lilies.

Roman mythology also had its opinions about lilies. Fictional tales suggest that the Goddess of Beauty, “Venus” was envious of the pure whiteness of the lily flower. The mythological character was so jealous that she cursed the flower with the anthers in the middle.

In a more religious context, Christianity linked the white lily with the chastity and purity of the Virgin Mary. The religion had also used the white flower as a means of mourning children that have passed away.

What Does a White Stargazer Lily Symbolize?

After gaining some insight into the symbolic meaning of lilies, you may expect similar connotations regarding the stargazer variant.

Nevertheless, since stargazer lilies are essentially a development of the flower species, they may also symbolize evolution.

This evolution can further signify growth and looking ahead in your life. The stargazer lilies can point to pushing off norms and developing your new and better self.

That being said, stargazer lilies generally may communicate the significance of time and how you should take a step back and reassess your life’s goals.

When it comes to white stargazer lilies, these flowers may convey a different message. They’re all about being empathetic and expressing innocence and purity. This is why they would make the perfect “I’m sorry” gift.

Since they also indicate purity, they may also make wonderful gifts for your friends’ baby showers. Alternatively, you can add white stargazer lilies to your bridal bouquet or make it into a gorgeous centerpiece.

The white lilies are also ideal options to have for funerals. They personify the souls that departed and honor them. Some cultures believe that white lilies may also represent reincarnation.

Now, if you’re unsure which kind of white stargazer lily to choose from, we recommend some Ice Clear or Crystal Blanca. Just make sure to get these flowers in the summer since that’s when they bloom best.

Stargazer lilies come in lots of other colors apart from white such as pink, orange, and yellow. Here’s what each color means.

Pink stargazer lilies are the most prominent ones on this list. They symbolize abundance, prosperity, perfection, success, and luxury.

This red-speckled flower would best be gifted to a friend who’s celebrating a promotion or graduation. You may also give this to your mother since pink is synonymous with motherly love.

Yellow stargazer lilies are probably the most mesmerizing option on this list. Their petals are almost a golden yellow. Plus, their freckles are orange and red creating a sort of blush appearance.

These pretty lilies may represent happiness and friendship. They might be difficult to come by since they don’t grow as commonly. Nevertheless, if you happen to find some, you may add it to your living room for a pop of color or gift it to a friend to express your gratitude.

Orange stargazer lilies almost look like a tropical species with their bright coloration. They look like a flower you’d find deep in the Amazon. That being so, these vibrant flowers signify hope and faith.

They also stand for new beginnings and inspiration. The flower is always staring high in spite of its surroundings. The imagery encourages you to not allow yourself to be troubled by minor issues and always have hope for the future.

How to Care for a White Stargazer Lily

As their name suggests, stargazers need to be fully exposed to the sun, for at least eight hours per day. Not enough sun can cause leggy and weak stems.

When it comes to watering a stargazer lily, you need to resist the urge to spray the top. It may cause mulch and rot. Instead, focus all the watering on the soil. You can provide over an inch of water each week.

Stargazers love soaking up in the sun. They can flourish in temperatures ranging from 80 to 90 degrees Fahrenheit. The best place to plant stargazer lilies is near other plants or flowers so their bulbs are cool but the petals and stems are sun-exposed.

Stargazer lilies need to be well-fed. You can provide them with some 10-10-10 fertilizer during the beginning of spring. Make sure to gradually fertilize them as the weeks go by after.

Since white stargazer lilies have only been developed at the end of the twentieth century, they have yet to gain a solid cultural meaning.

Having said that, the future is looking up for these stargazers as people become more interested in buying them.