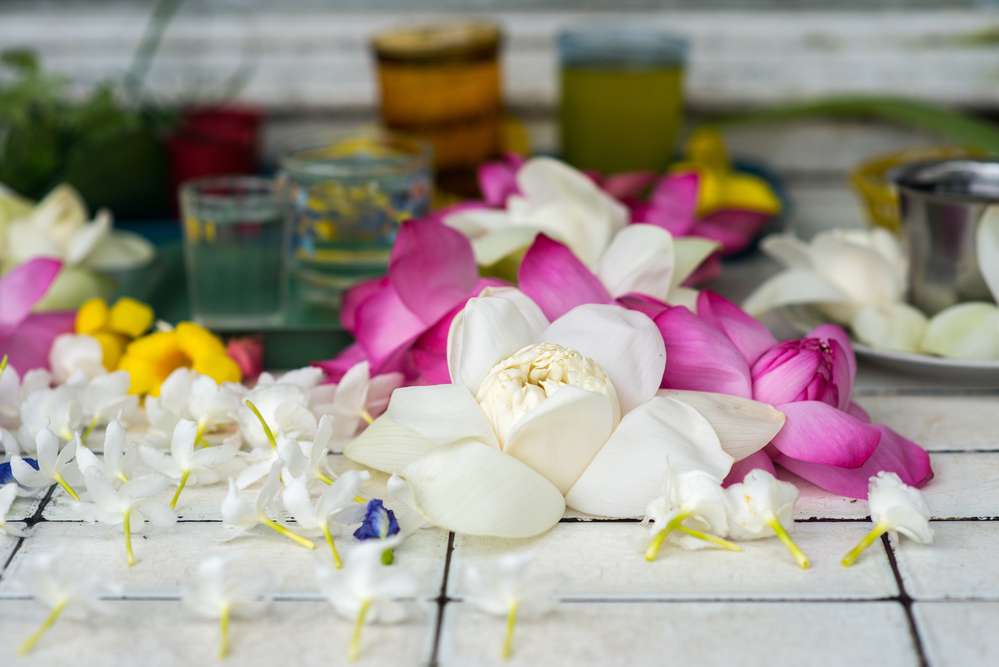 Are you curious about the white lotus flower meaning?

In Buddhism, a white lotus is usually associated with being faithful and pure. Meanwhile, ancient Egyptians saw white lotuses as a sign of rebirth since they bloom as the sun rises. Hinduism perceives the white lotus flower as a symbol for honesty and light.

Stick around to learn more about the meaning behind white lotus flowers from different cultural perspectives.

The Origin of Lotus Flowers

Before diving into the symbolic interpretation of a white lotus, let’s look at the lotus’ origin story.

Spanning from ancient Egyptian times, lotus flowers carry a hefty historical background. The flower was found as a symbol in hieroglyphics, translating to rebirth.

The ancient Egyptian story of the lotus portrays the flower materializing from the depth of Nun’s primordial water. In the lotus, the Sun God, Re-Atum, emerges. The spiritual flower acts as his womb.

Ancient Egyptians weren’t the only historical group to be fascinated by the lotus. Early Buddhist and Jain cultures have illustrated the lotus flower on their sacred monuments.

These depictions can be traced back to 250 BCE when Emperor Ashoka was in power. Lotuses can also be found in some Buddhist shrines or stupas from 180 BCE.

In Hindu origin, the lotuses were drawn along with the Goddess of Prosperity, Lakshmi. She is also sometimes referred to as the Lotus Goddess.

The implications of the sacred lotus are seen today since it’s titled the national flower of both India and Vietnam. The first country is Hindu-centric, and the second is Buddhist-centric.

What Does the White Lotus Symbolize?

A white lotus can hold several meanings underneath each bright petal floating in its designated pond. The connotation of the flower isn’t restricted to one purpose. Instead, it spreads due to the mixture of cultural interpretations presented.

In a general sense, the white lotus shows resilience against darkness. Its stark white petals are heavily contrasted by its muddy black stems, covered in the depths of murky water.

The whole imagery can represent light where it’s mostly dark. It may link to death and rebirth, good and evil, and so on.

Having said that, let’s learn how some cultures and religions perceive the white lotus.

In this religious sect, a white lotus reflects a mind and body wellness ideal. White is a strong connotation of purity. Therefore, the bright-colored lotus represents purity in thought and actions.

That being so, Buddhist teachings stress the vitality of suffering before achieving full enlightenment. The religion positions the white lotus as a means to gain awareness and spiritual connection.

In most drawings, the Buddha is depicted as sitting on a white lotus in the lotus meditative position. This may symbolize the pathway to spiritual awareness as the heart is yet to open to become enlightened.

Apart from that, Buddhists also find significance in the number of petals in a white lotus. They must be eight to gain proper bloom or awareness. The eight signify the Noble Eightfold Path of the Good Law.

These include the right understanding, thought, speech, action, livelihood, effort, mindfulness, and concentration.

The religious group originated in the 4th century AD by a Buddhist monk. The affiliation heavily sought the rise of the Buddha along with a new dynasty.

The white lotus society partook in blood rituals and magic-inducing ceremonies. Nevertheless, the primary purpose of the secret society was to oppose the Yuan dynasty and Mongolian rule. This was essential to bring about the new Buddha dynasty.

Despite the significant differences between both religions, the polytheistic religion holds a similar symbolic gesture with Buddhists to a white lotus. Hinduism has the same premise of spiritual awareness and also builds on enlightenment as a method for the soul to fully develop.

There are a couple of Gods in Hinduism that identify with the white lotus, such as the Saraswati and Vishnu. Saraswati, or the Goddess of Wisdom, is usually drawn sitting or standing on a white lotus. The flower, in this instance, describes honesty, knowledge, and light.

Meanwhile, Vishnu is generally associated with the lotus flower since he is the Sun God. The petals open once in full bloom during the morning and enclose at night.

Hindus may also relate a white lotus with beauty and unattainable ideals, which is why it’s highly respected in this sect.

On top of that, the symbolic flower is commonly used in religious ceremonies, such as puja. The ritual’s purpose is to worship one or more Gods of Hindu belief. The white lotus offers these deities a symbol of honor, purity, and devotion.

Did you know that ancient Egyptians consumed the lotus flower’s petals as a powerful aphrodisiac and psychedelic? This practice doesn’t rule out the crucial meaning white lotuses held in ancient Egyptian culture.

The vibrant flower was held in high regard among the Egyptians. It primarily symbolized rebirth, fertility, and innocence.

Building on the fertility symbol, white lotus amulets were worn by women when giving birth. Subsequently, the flower was drawn to give its people power and perseverance.

This might be reflected in how a white lotus maintains its vibrancy despite swimming in a pool of muddy water.

Speaking of power, ancient Egyptians heavily believed in the power of judgment in the afterlife. This is why prominent pharaohs such as Ramesses II had white lotus flowers decorating their burial tomb. It was to provide him with the needed perseverance in the afterlife.

In the ancient Greek and Roman eras, white lotuses were thought to symbolize innocence and humility.

Apart from that, lotus flowers at that time were mostly synonymous with a mythological group called the Lotus Eaters. They were also named the Lotophagi. This group resided close to a North African territory on an island where it was thought to be filled with lotus.

The flowers were their main source of sustenance. Nevertheless, things turned sideways as the white lotus provided more than food. The Lotophagi were in a state of unconsciousness from the drugging effects of the lotus flowers, but that’s a story for another day!

Like other religions and cultures mentioned, the white lotus embodies rebirth in Christianity. This symbolism is conveyed when Christ was rebirthed and went to heaven.

Another Christian interpretation of the white lotus refers to the Virgin Mary’s innocence and purity. You may also find a similar connotation in the monotheistic religion with the white lily.

Feng shui is a Chinese practice where you basically arrange your belongings or furniture in a way that creates balance.

This traditional practice also has its thoughts on white lotuses. The flower displays a metal power that carries the ability to transcend any obstacles.

The most commonly held belief is the flower’s representation of purity and rebirth in both a religious and psychological sense.

Psychologically, the color white resonates with blankness and re-identifying yourself in different colors. In religious speak, the purity and path to enlightenment of the white lotus carried a plethora of devoted followers.

This implies the significant effect that one small white flower has over millions of people and their beliefs.