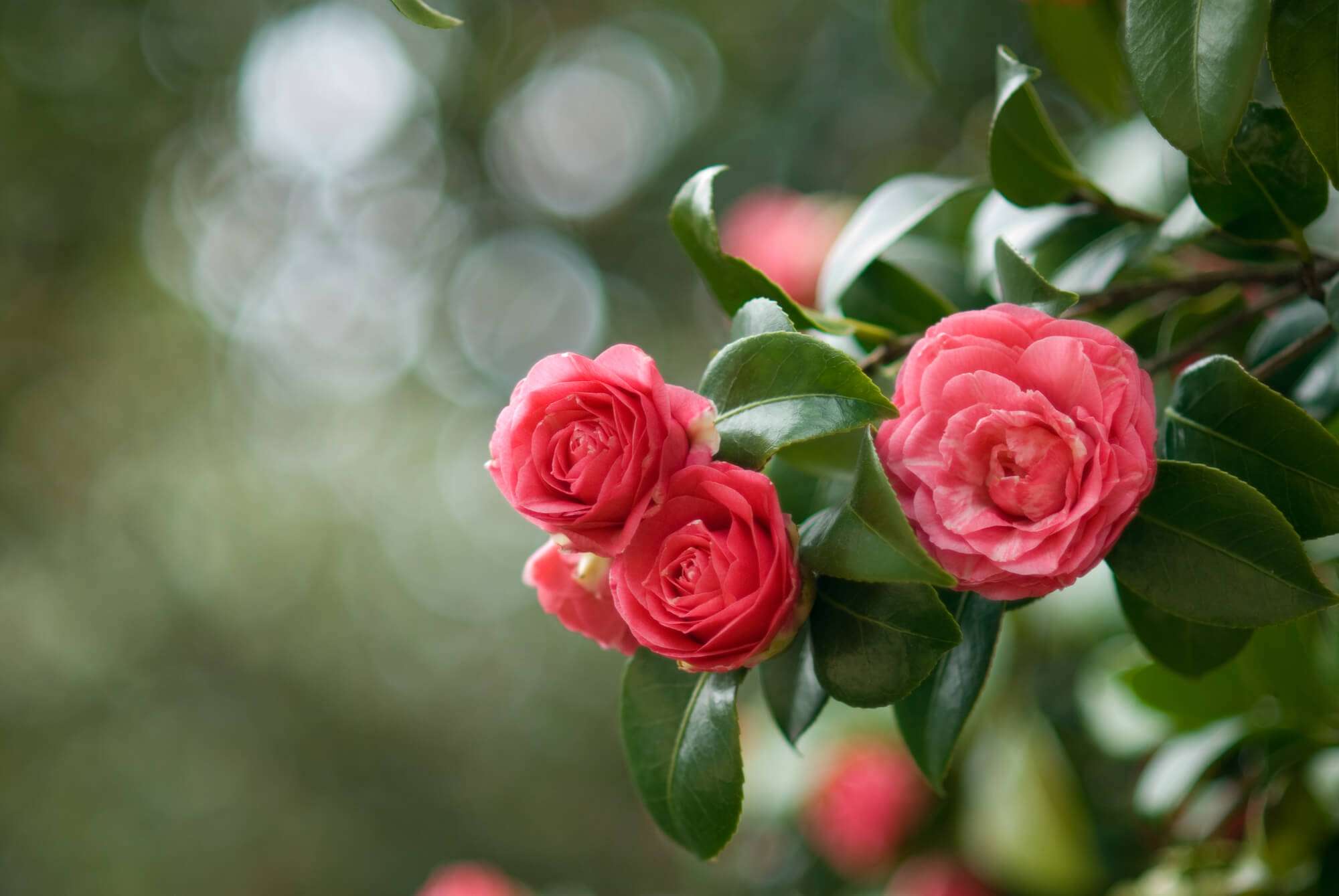 Are you looking to tie the knot later in the year and curious to know what wedding flowers are in season in October?

Due to the noticeable changes in the weather, October has a unique combination of flowers, including familiar ones like roses, hydrangea, dahlia, sunflowers, and orchids, but also has several unique ones like camellia, alstroemeria, marigold, and more!

If you want to find out more about the wedding flowers that bloom in October, what they look like, and what they represent, then you’re in the right place! So without further ado, let’s dive right in!

Kicking off the list with one of the most beautiful flowers that begins to bloom late into the fall season and continues to bloom until early spring. The camellia flower belongs to the Theaceae family, which is the family of tea.

Since it blooms in late fall and throughout winter, it is also known as the “queen of the winter” or the “winter rose”, although roses belong to a different family.

Despite its name, the calla lily isn’t actually a lily. Lilies don’t bloom in October, as they typically prefer the early summer weather while calla lilies bloom in early and mid-fall.

Despite that, similar to lilies, calla lilies are considered a symbol of fertility and blessings, but they can also have many different interpretations

That said, the calla lily is still one of the most beautiful and elegant flowers to decorate your wedding with. Not only that, but they are also quite pricey.

The flower is known for its cone-shaped petals and sleek stems. Although it exists in different colors, the arum variety of calla lily (the white one) is known for being the prettiest and most expensive.

Freesia is one of the most beautiful and uniquely shaped flowers out there that will give your wedding floral decorations a solitaire touch despite being surprisingly affordable.

Each stalk of the freesia features several small-sized flowers (around 6 to 10) that are facing upwards. It exists in several colors with white being the most common, although you can find it in other colors, such as yellow, orange, purple, red, and pink.

Keep in mind that freesia originally blooms from June to late September, but in some places, the blooming season may extend to October as well. Freesia is known for being a symbol of trust, so it’s a great addition to a themed wedding bouquet.

Although hydrangeas are quite popular in the summer months, their blooming season extends well into mid-fall, so you can still find them in October.

The hydrangea flowers are shaped like bushes or spherical poms, and they are commonly used in garden wedding decorations

The unique beauty of the hydrangea flowers makes them excellent for centerpieces, and they also come in various colors to match your palette. Not only that, but each color has its symbolism and meaning.

For example, pink is for romance and sincere emotions, sky blue is for understanding and gratitude, and white is for grace and beauty!

Roses are one of the ultimate wedding flowers for a wide range of reasons. For starters, roses aren’t only red. They come in a huge range of flowers, including white, purple, orange, yellow, pink, and even green, black, and blue!

Not only that, but they’re also available almost all year round, so you’ll always find varieties of roses that are in season at any time of the year.

Roses have also been associated with love and romance for centuries, which makes them the most common picks for weddings.

Sunflowers are among the most popular species of the daisy family. These flowers are known for their beautiful golden yellow colors and dark brown disks in the middle with the ray floret pattern that makes them an excellent choice if you’re having a rustic style wedding.

Sunflowers will start to germinate late into the spring and stay blooming till the end of the year, so they’re typically available in September.

In addition to its beautiful color, the sunflower carries a lot of meaningful symbolism, as it’s the universal symbol of loyal love due to its infamous devotion to the sun.

Orchids are a huge family of flowers and varieties that bloom at various times throughout the year, so it’s no wonder why there are some orchids that are in season in October.

One of the most popular orchids that are in bloom throughout October is the phalaenopsis orchid, also known as the “moth orchid”.

This one comes in a wide variety of colors depending on its variety. The most popular ones are white and pinkish variety while the yellow one is relatively rare. These orchids represent passion and joy, which makes them an excellent choice for wedding decorations.

Alstroemeria is a species of flowers that comes from South America, which is why they’re called the “Peruvian lilies” and “lilies of the Incas”.

This flower is known for its impressive look. The petals are arranged in a cluster over a leafy stem with several markings on the inside, giving the flower a truly exotic look.

It also comes in several colors and hues that depend on the color’s variety, such as golden yellow, white, scarlet red, orange, purple, and pink. The flower is a popular symbol of devotion where it grows.

Dahlia is one of the flower species that will have a long blooming season that starts in late spring and extends to the early frost of the fall. This abundance makes them an excellent choice for wedding decorations.

Another reason for their popularity is, of course, their breathtaking beauty and color variety. As the plant belongs to the Compositae/Asteraceae family, its flowers are characterized by the multi petal ray floret structure that radiates in several directions.

You can find these flowers in violet, pink, yellow, and maroon. Other colors like purple, orange, and red are found but aren’t as common.

Another flower that belongs to the Asteraceae family that is in season in October is the chrysanthemum. This flower is quite similar to dahlias, although not as geometrically defined.

Unlike many flowers on the list, chrysanthemum has a fairly earthy and non-fragrant scent, but it makes up for it in terms of looks.

Chrysanthemum exists in both unicolor and bicolor varieties, and you can find them in shades of yellow, orange, white, purple, red, violet, or even in combinations of those colors. The flower is associated with a lot of meanings, with honor and respect being the most popular in North America.

The snapdragon is a unique-looking flower in that its blooming season extends from spring to fall, but they usually bloom brightly in relatively cool weather, so they’re more common in October and November.

The snapdragon flower comes in a wide range of types and varieties that vary in terms of colors and patterns. You can find the flower in both pastel and vibrant shades of orange, pink, yellow, purple, peach, red, white, and combinations of these colors.

Marigold is one of the brightly colored flowers that will bloom throughout October. In fact, this flower is one of the official birth flowers of October.

As the name suggests, marigold is characterized by its magnificent hues of golden yellow and orange that shine brightly in full sun like gold.

The flowers of this plant are bushy or shaped like pom-poms and are used in garden decorations, so they’re excellent for adding volume and color to wedding bouquets

In addition to marigolds, cosmos is the other official birth flower of October. Like marigolds and many flowers on the list, cosmos belong to the daisy family (Compositae), so they share a lot of resemblance in terms of features.

The flower is usually purple, pink, white, or a mix of those colors. The petals will stand on top of a long stem, so the flower goes well with orchid and marigold.

Besides the flower’s beauty and color variety, cosmos also represents resilience against time, harmony, and kindness towards each other.

Final Words: What Wedding Flowers Are in Season in October?

There you have it! A brief guide that walks you through a list of some of the most popular wedding flowers that are in season in October.

In the end, we hope that this guide has helped you figure out your ideal pick for your bouquet, centerpiece, and boutonniere assortments.

Luckily, the list features a huge range of beautiful and colorful flowers of all shapes and styles, so you can mix and match many of them together.