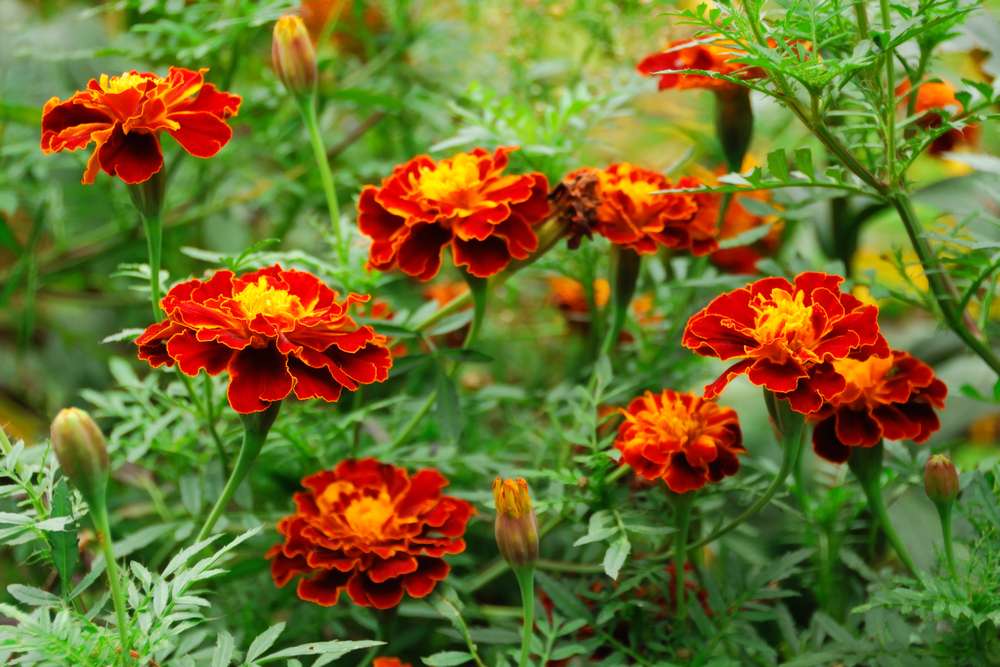 Delaware is best known for its continental climate. It witnesses large variations in the temperature, making it challenging to find plants that grow well there, let alone flowers.

So what flowers grow well in Delaware? Flowers that grow well in Delaware include petunias, zinnias, dahlias, tulips, lilies, daffodils, and marigolds. They need to be heat tolerant and ready for the frequent temperature changes, and all of these species fit into the category perfectly.

Read on for further details about the best flowers to grow in Delaware.

The good thing about marigolds is that they can survive both hot and cold months. So, the continental climate of Delaware will suit them well.

African marigolds are drought-tolerant, which means they can withstand tough summers like they’re nothing. As long as they get water, they’ll keep blooming.

On the other hand, French marigolds are well-prepared for wet conditions, so they don’t mind some rain and moist soil.

Generally, it’s hard for marigolds to die because of the weather; they can do pretty well as long as there isn’t any frost.

These flowers need deadheading, and they’ll keep blooming for around eight months. They also attract plenty of pollinators, so get ready to welcome bees and butterflies into your garden!

Whether they’re fringed or straight, single or double, tulips can catch your eyes amid a garden full of flowers. With their proud stances and vibrant colors, they demand attention, and they know how to get it.

Tulips grow in the colder months of Delaware. They can’t handle the heat, and even if they manage to grow, they’ll only last for one season and refuse to rebloom in the next year.

For Tulips to survive, they need the temperature to be under 55 F, which is pretty manageable in Delaware outside of the hot months. At the same time, the temperature shouldn’t go below 30 F because the buds may stop growing.

Whether you prefer African, Shasta, or English daisies, all will fit beautifully in your Delaware garden. Daises are perennial, which means they’ll keep blooming year after year instead of dropping their buds after the first season passes.

Not only that, but daises also belong to the plant-and-forget tribe. After they’re established, you don’t have to do any maintenance. Provide some water, sunlight, and good soil, and the flower will do the rest on its own.

It’s also noteworthy that daisies are tolerant of high temperatures, which makes them a good candidate for Delaware.

Zinnias are annual flowers, which means they’ll only flower for a season, and the buds will stop growing. However, that shouldn’t stop you from enjoying them the next summer. Zinnias are actually among the easiest flowers to seed because they don’t need much care or water.

They may only need deadheading to grow more flowers, but other than that, you’ll plant them and forget them.

Zinnias can also handle growing in garden beds, containers, or even window boxes. They don’t need to grow in the ground to survive.

These flowers are generally flexible when it comes to the climate, but they can’t handle frost. So, it’s good news for your Delaware garden.

Daffodils are a favorite of many, and their association with plenty of poems gives them a peaceful aura. But aside from that, daffodils are pretty easy to care for, even if it’s your first time growing flowers in your garden.

Daffodils don’t need pruning or deadheading, so you’ll just plant them and forget about them. On top of that, they’re tolerant of both hot and cold weather, so they won’t mind the temperature jumps in Delaware. The flowers may die, though, if the temperature falls below 25 F.

Generally, daffodils are the definition of hardy. They can withstand pests, fungus, diseases, and long periods of either high or low temperatures.

Aside from their pretty appearance, dahlias are among the easiest flowers to grow. While flowers mostly require a lot of maintenance to keep growing, dahlias can grow well without much fuss.

They don’t need a lot of water, and they rarely need fertilizers. They can also thrive in plenty of soils, but they prefer well-drained soil that’s a bit loosened.

Dahlias are best grown in gardening containers because then you can keep them anywhere in your house.

Coneflowers come in 24 different types, and what they all have in common is that they’re easy to grow. They’re not demanding, and they’re flexible when it comes to climate. They love the heat and thrive under the sunlight, but they don’t mind some cold.

If the weather is freezing, they may stop flowering, but they’ll live through the winter and rebloom in the spring, which is more than I can say for most flowers.

Coneflowers are hardy; they withstand pests and can handle drought conditions. They also don’t mind some rain. Their main threat is aphids and whiteflies, so make sure to keep those away from your garden.

As for the soil, coneflowers need well-draining soil because retained moisture can lead to root rot. They can handle dry soil or medium moisture, but not more than that.

Lilies are well-suited for Delaware’s varying weather because they can withstand both heat and cold. In fact, they need a couple of cold months each year to survive. Other than that, they can handle temperatures up to 90 degrees F.

Generally, lilies can grow anywhere except in tropical areas. They’re also perennials, so they’ll keep blooming in your garden at different times of the year.

One more thing to love about lilies is that they grow vertically in slim stalks. So, they’d be perfect for small gardens and garden beds because they don’t do leggy growth.

All that said, it’s worth noting that deers love munching on lilies. So, if you have deers in your area, try to keep the flowers in a fenced place.

Petunias are perfect for growing in Delaware because of their flexibility. There are multiple varieties of the flower that you can keep in your garden, including Grandifloras and Milifloras.

Petunias thrive in hot weather, and they even bloom more flowers when the temperature is high. On top of that, they’re relatively low-maintenance. You won’t need to deadhead them or water them frequently. Their high heat tolerance makes one time a week more than enough for watering them.

One last thing to love about petunias: they can grow virtually anywhere. They’re not particularly selective when it comes to sunlight. They can grow in the sunlight and shade alike, although they prefer light.

Black-eyed Susans are perfectly cut out for drought conditions. They only need water when you’re first planting them; then, you’ll only have to water them when the soil is dry. They can handle long periods without water, making them good candidates for Delaware’s hot summers.

You can plant black-eyed Susans in the mulched ground or compacted soil, but they generally thrive in loamy or clay soil.

These flowers will keep attracting pollinators in the summer, and through the early fall, so you’ll get to see plenty of butterflies in your garden.

Keep in mind to remove weeds periodically from your garden. If they grow too much, they can affect the growth of your black-eyed Susans.

Final Thoughts On What Flowers Grow Well in Delaware

The climate in Delaware is versatile, changing from cold to hot repeatedly throughout the year. That makes the state a good habitat for flowers that can handle temperature variations. Luckily for you, there are plenty of beautiful flowers that don’t mind some heat in the summer and cold in the winter.

You can plant lilies, coneflowers, marigolds, or daffodils in your Delaware summer garden. It’s better to aim for perennials because they’ll bloom year after year.