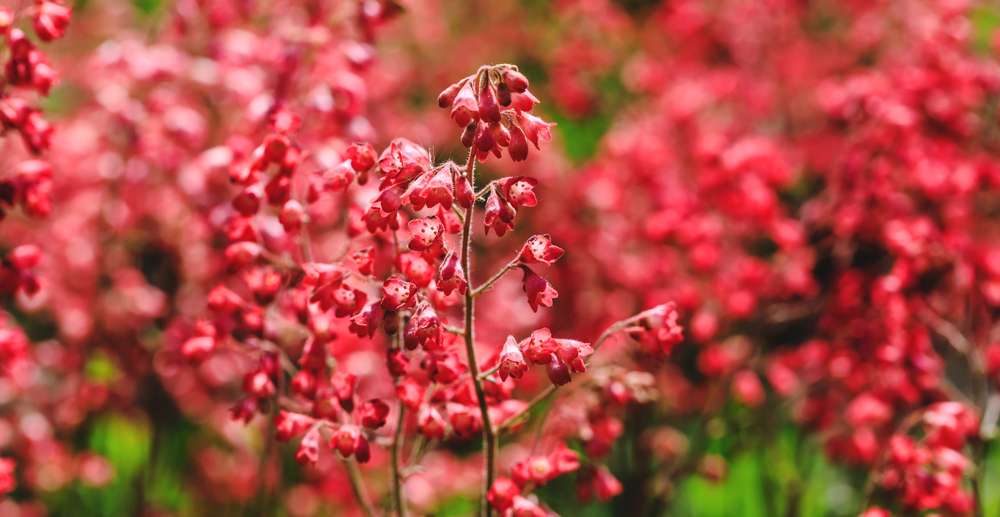 Most flowers need full sunlight to grow, and Colorado is one of the sunniest states in the US. So, it doesn’t take a genius to figure out they’re a good match.

Below is a guide to flower that thrive in Colorado, so you can start preparing your garden for the next spring!

Coral bells are the perfect flowers for your Colorado summer garden, with their purple and reddish blooms that can reach three feet high. Unlike most other flowers on this list, they don’t need much sunlight, so you’ll be better off growing them if your garden only receives filtered sunlight.

These flowers mainly grow under partial shade. They tolerate the sun when the temperature is low, but other than that, they prefer filtered sunlight.

Their soil should be well-draining and relatively moist. Also, depending on the species, they may need slightly acidic or neutral soil. On top of that, they need an inch of water per week, but it may vary depending on the humidity in your area.

Lavenders are worldwide popular for their use in essential oils and beauty products. Their distinctive smell makes them the target of many manufacturers in the beauty industry. And the fact that they’re easy to grow makes them even more popular.

These flowers have been gracing the Earth for 2500 years, making them among the oldest species on this list. They’re originally from the Middle East and India, so they’re no strangers to the hot sunny weather of Colorado.

These flowers need plenty of sunlight, at least most of the day. Plus, like most flowers, they need well-draining soil.

Poppies popularly grow in California, and since Colorado’s weather isn’t far different, they grow equally well in the state. With their bright orange colors, they’ll certainly give your garden a nice tinge.

But aside from their appearance, poppies are among the easiest flowers to grow. They don’t need a lot of water. They’ll be alright as long as you keep them under direct sunlight. But, of course, they also need well-draining soil, and you’ll already be providing that for the other plants in the garden.

You may have to prune poppies to keep them from leggy growth, but it depends on your garden.

The sedum flower grows in clumps of tiny flowers, so it’d look pretty decorating any garden in Colorado.

These flowers nearly grow worldwide, having native species in Asia, North Africa, Europe, and North America. They’re used to dry weather, yet they tolerate humidity well. They thrive under the full sunlight, but they can survive in partial light.

Needless to say, they’re flexible and easy to grow. As long as you give them low-draining soil, they’ll keep growing.

Salvia flowers, or better known as sages, are native to Mexico. So, they’re used to the dry weather and large temperature difference.

These flowers grow best under the full sunlight, which is redundantly available in Colorado. They also need well-draining soil because moisture can cause their roots to rot, and that’s easy to provide too.

They’re relatively low maintenance because they’re resistant to pests, but they may require deadheading if you want their flowers to keep blooming.

Salvias attract a lot of hummingbirds, so get ready to see flocks of the tiny bird in your yard if you’re growing them!

Lupines may just be the prettiest flowers on this list. They grow in tall stalks of colorful flowers, kind of resembling lavenders but with different colors.

Aside from their beautiful appearance, these flowers are also easy to take care of. They’re okay in both full sunlight and partial shade, and they need a well-draining soil like most flowers on this list. They grow tall, sometimes up to five feet.

It’s worth noting that lupines aren’t the best choice for everyone. Although they’re beautiful, they’re toxic to humans and animals because of their alkaloids. If you have kids or pets around, they probably won’t take enough care and may accidentally ingest the flower. So, make sure your family knows the risk before planting lupines.

Geraniums thrive under full sunlight, and they don’t like the harsh wind that may blow the petals away. Of course, this makes them a perfect candidate for growing in a Colorado garden.

They’re relatively easy to take care of, but they need frequent watering. Other than that, they don’t need fertilizers in large amounts, and they grow well in well-draining soil.

You can grow these bright purple flowers in containers of any shape. All you have to do is make sure they have draining holes on the bottom, and you’re good to do.

Bear in mind that geraniums attract butterflies, bees, and other pollinators around. So, you’ll find some visitors in your garden when you grow geraniums.

Russian sages are often mistaken for lavenders and vice versa. Both flowers have a similar structure and a strikingly similar color palette. However, they come from different families, so they’re not even distant cousins.

Russian Sage thrives without rain, so it’ll live well in the dry weather of Colorado. It also grows and blooms under full sunlight and in partial shade, so you can place it anywhere in your garden.

These flowers can tolerate cold as well, but they may not bloom as they do under full sunlight.

Echinaceas are easy to care for because they grow in both full sun and partial shade. Ideally, they should stay under direct sunlight for four or more hours a day, and they can spend the rest in partial shade.

Like most flowers on this list, coneflowers need soil that doesn’t retain moisture. The better the drainage, the lower the risk of developing root rot. They do best in rocky soils.

I have a special place in my heart for yellow flowers, and honeysuckle is no exception. The flower is beautiful and drought-tolerant, making it the perfect candidate to grow in Colorado. However, you need to plant it in the right place if you want to see it blooming in beautiful flowers.

Honeysuckles need to grow under the full sun. They may survive in the shade, but their flowers may not bloom as brightly. They also need well-drained soil to prevent their roots from rotting.

These flowers emit a sweet smell that’s sure to attract some hummingbirds. You’re likely to see the tiny birds in your garden if you grow honeysuckles.

Violets are beautiful; there’s something melancholic about the way their petals start black on the inside and fade out to violet color. Luckily for you, they’re easy to grow. They rarely get pests or suffer from common plant diseases, so they’re low maintenance.

On top of that, violets are hardy flowers, tolerant of most climates. They thrive under the full sunlight, but they also grow well under partial shade. In the summer, they prefer filtered sunlight, so their flowers keep blooming.

As for the soil, it should be well-drained yet slightly moist. You can also add some compost if you want the flowers to thrive.

Final Thoughts On What Flowers Grow Well in Colorado

Colorado’s climate isn’t the best when it comes to plants. The dry weather and lack of humidity can cause some plants to wilt. Plus, the state is one of the sunniest in America, so its summers are tough.

Now, you have a much better idea of what flowers grow well in Colorado!