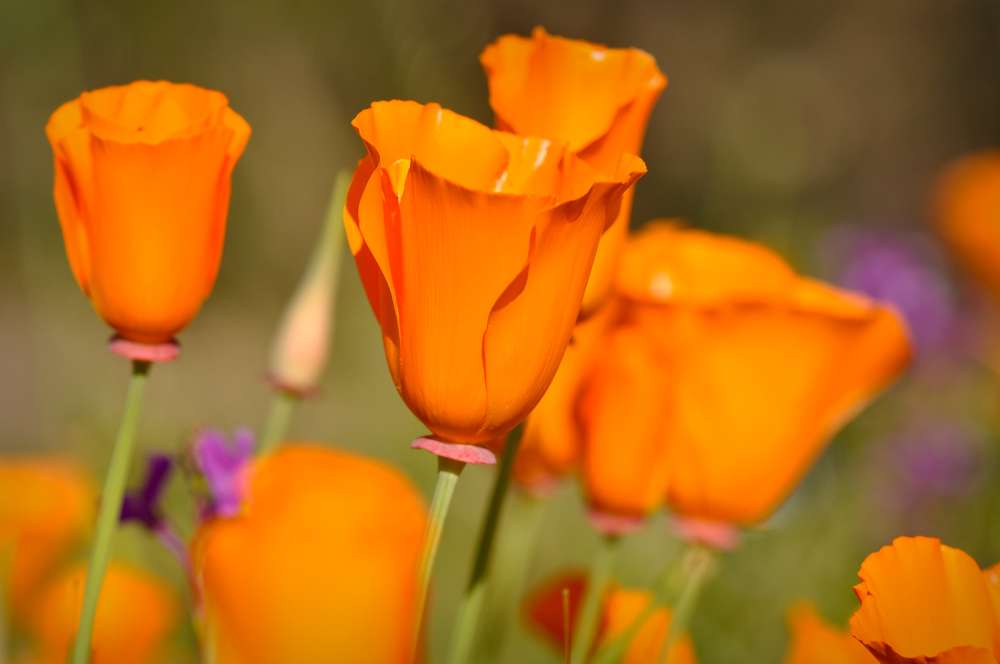 With its Mediterranean-like weather and dry winter, it can be challenging to know exactly what flowers grow well in California. They need to be drought-tolerant and preferably low-maintenance, which minimizes the options.

So, what flowers grow well in California?

As it happens, the list is long, including but not limited to beardtongue, fuchsia, aster, poppies, cotoneaster, lilacs, and spider flower. You can also choose one of California’s native flowers, including yarrows, blue-eyed grass, milkweed, and chollas.

Here’s the complete list of flowers that grow well in the drought-like weather of The Golden State.

We can’t really list California flowers without mentioning the state’s flower, the California poppy. With its bright orange color and large petals, the flowers fit perfectly into the state’s habitat.

It’s drought-tolerant, which is one reason it thrives in California. Not only that, but it’s also low maintenance because it reseeds itself. So, you can have flowers growing in your garden’s bed each year without having to go through seeding.

If you live in colder areas of California, you can have poppies decorating your garden for the entire summer.

They need well-draining soil that’s preferably sandy, and they thrive under the full sun.

There are many different species of cotoneaster, but most of them can grow in California comfortably. They need full sun and partial shade to thrive, and both are easy to provide in The Golden State.

These flowers may need more maintenance than your average Californian flowers because they may need pruning, but it’s nothing major.

Once established, these flowers don’t need much water, which is a bonus. They prefer fertile soils to grow and thrive, but they can grow equally well in soil with good drainage. As long as there’s no moisture retention, the flowers will grow happily.

Indian Paintbrushes are every bit as unique as their name. They have that name because they look like paintbrushes with their tall stems and protruding petals.

These flowers can grow in California well because they love the sun. They only need minimal care because they can fend for themselves by feeding on the roots of other plants.

So, even if you don’t provide enough water, they can manage their growth.

The beardtongue flower, or penstemon, is a flower native to California, so needless to say, it can grow well in the state’s climate. Grinnell’s beard tongue can grow in central or southern California. It’s a common sight in the Transverse Range and the High Sierra Nevada.

The perennial flower grows in clusters of purple or violet petals. Its leaves are distinct among other flowers, thanks to their unique curved shape.

Beardtongues need rocky soils and total exposure to the sun. However, they don’t need a lot of water, making them suitable to grow in California.

Snake cholla, or California cholla, is native to the state. It’s associated with the name snake because it grows in long cylinders that resemble the sneaky, slithering rodent.

The chollas can grow to cover your whole ground because of their length. Not everyone likes the spines that the flower grows, but I’d say it can add an exotic touch to your garden. The green flowers with red highlights that bloom out of the plant are enough to convince you!

California chollas need full exposure to sunlight to thrive, and they can grow in any soil as long as it’s fast-draining and doesn’t retain moisture. The roots are prone to rot, so the soil should drain the water fast.

These flowers grow in clumps that you can break apart for replanting, which is a good option if you want to have several areas planted with irises.

Douglas iris only needs frequent watering at first. When the flowers fully grow, you’ll only need to provide water when the soil is dry.

Fuchsia is a popular flower mainly because of its bright red color. It’s native to California, so it’s used to the tough climate.

California fuchsia needs full exposure to the sun for at least six hours per day. On top of that, it needs well-draining soil because retained moisture can cause root rot.

These flowers don’t need a lot of water, so they’re relatively low maintenance. However, they may need a full soak every once in a while to encourage flowering, especially in the hot summer weather.

Lily of the Nile

As obvious from its name, the lily of the Nile grows along the popular African river. It’s native to a couple of African countries, growing from South Africa to Egypt. The flower thrives in warm climates, making it a good candidate to grow in California.

The lilies grow in a large clump, topped off by trumpet-shaped spikes. They typically bloom in the late summer, and they don’t require much maintenance. All you have to provide is full sun and well-draining soil, and the plant will do the rest.

Santa Barbara Daisy is basically a no-maintenance plant, which makes it an excellent choice if you’re busy. Once the seeds are established, and the flower is grown, it becomes drought-tolerant. So, you don’t have to water it as frequently as you water other plants in your garden.

The flower can grow well in California because it doesn’t appreciate overwatering, so the lack of rain can actually be useful as it is. It typically needs the soil to be moist but only moderately to prevent root rot.

The petals of a Santa Barbara Daisy are first white, and then they turn pink when the flowers grow. The center is often yellow, contrasting brightly against the pink petals.

The California milkweed is an elegant addition to any garden. The plant produces thick, white stems that catch your eye amid an array of other flowers. When it flowers, you’ll see clusters of tiny blooms in pink and lavender colors.

The milkweed flower thrives in clay soil, and it can live in sandy soil alike. Like most Californian plants, it needs full sun to grow efficiently.

If you’re growing milkweeds, you should avoid pesticides at all costs because they can kill them.

Contrary to common belief, blue-eyed grass isn’t actually a grass. Instead, it’s a flower that’s called that because it resembles grass. The leaves also grow in a thin hairy shape, making the flower seem like what you often see covering your lawn.

Blue-eyed grass grows in full sun and partial shade. It needs a blend of sand, clay, and silt for the soil, which is otherwise called loamy soil. This type is best known for retaining moisture, so the plant won’t need frequent watering. Only the occasional watering will be enough.

The flower is low-maintenance, making it easy to grow anywhere. It blooms in purple flowers starting from late winter. It’s also fire-resistant, which is a bonus in hot areas.

California lilacs are native to the hot state, making them excellent plants to grow in your garden. They thrive in the full sun, only needing shade in the afternoon. Other than that, they need well-draining soil because the moisture can cause root rot if retained for a long time.

Most lilacs grow flowers with their spikey shape in the spring, but some species may only flower in the summer. It depends on your seeds and the growing conditions.

Final Thoughts On What Flowers Grow Well in California

Although California’s weather may be tough on plants, there are endless flowers that you can plant in the state. Most of them are low maintenance, which is a bonus. As long as you can provide full sun and well-draining soil, you’ll have multiple options to choose from.