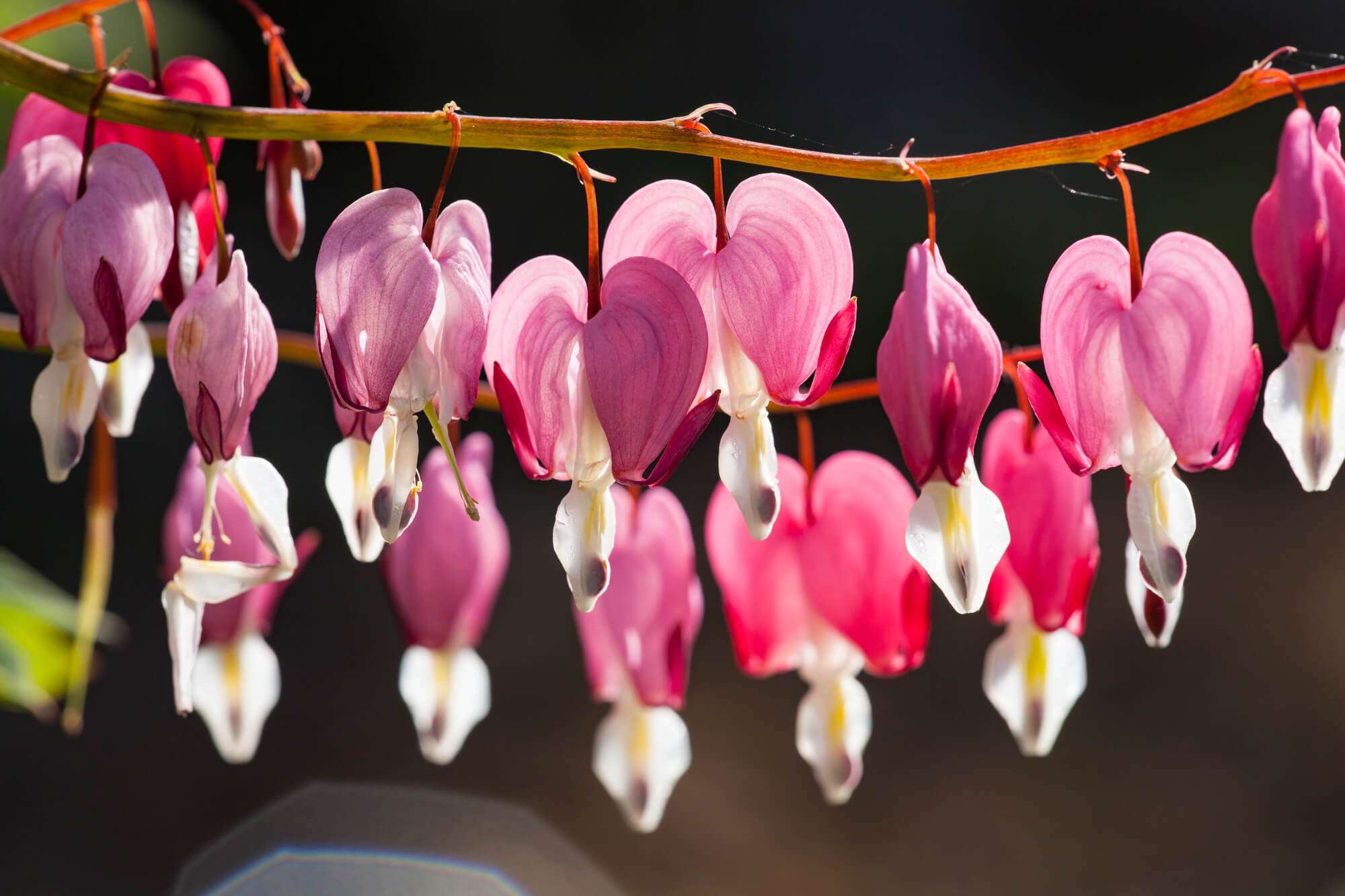 Lamprocapnos spectabilis, also known as Bleeding Heart flowers, are highly toxic plants so they don’t tend to attract too many animals keen to eat them!

In this article, I’ll go into more detail about the natural threats to a Bleeding Heart plant. I’ll also explain how to identify these pests and subsequently control them.

Why Mammals Would Not Eat Bleeding Heart Plants?

Farmers and gardeners often plant them at the fringes of their fields to ward off deer. That’s because the Bleeding Heart flowers mean trouble to most mammals. And this is often a clever way to keep a host of mammals away from a garden, however, it doesn’t always work.

Despite the strong instincts animals have, and their wise ways around food, they still make mistakes. Especially, when the food around them is much too scarce. Then, they might take risks and eat a Bleeding Heart plant.

The toxicity of sap is a legit defense mechanism that several plants have. Some are quite poisonous, like Deadly nightshade, or Atropa belladonna. While others just give those who approach them allergies, like ragweed, sumac, and poison ivy.

There’s another interesting mechanism that’s exclusive to coffee trees, which is caffeine. This substance that gives us a much needed boost is a much dreaded material for pests. Robusta coffee, which has an abundance of caffeine, often gives a much bigger yield than Arabica coffee which has lower caffeine levels.

The Bleeding Heart plant employs high toxicity as an effective way to keep herbivores, birds, and critters from feasting on it. This is important since this plant looks visually attractive, and its blooms are plump and seem to be delish.

Despite all that effort, some predators still find a way to eat the Bleeding Heart plant. Here are the most common:

Snails and slugs would most probably be found wherever there’s greenery. This is their best on-land habitat. These mollusks are great at procreating, and being hermaphrodites make this matter even easier.

These slow crawlers would be easily spotted and crushed during the daytime. Thus, they choose to feed by night, where their forays wouldn’t be noticed. They’re also pretty good at hiding, so a dense layer of mulch, or some dead leaves in a pot, can provide perfect hiding spots.

Detecting the presence of these molluscs is often easy by looking for a silver sticky trail on and around the plant. Additionally, they leave random holes in the plant where they feed on it. This is in sharp contrast with caterpillars, for example, which consume big parts of a leaf per feed.

Mechanical elimination of snails and slugs is often the best remedy. You’d need to look for the mollusks at night, put on thick gloves, and pluck them out of the soil and off the plants. The next best thing is to use diatomaceous earth and sprinkle that repellant where the snails are expected to be.

Aphids are tiny little insects that feed on the sap of plants. They can attack any part of the plant that they land on, so their effects would be clear on the stem, leaves, branches, flowers, and fruits. They’re a bit difficult to discern without a magnifier, but their effects are hard to miss.

These pests rarely feed alone. Often, a whole colony takes over a plant and starts sucking the life out of it. In a few days, aphids can turn a robus plant into a wilted lifeless affair. The leaves are often curled up and the stems are covered with a sticky substance.

There are some organic, and home prepared, remedies to get rid of aphids. The most common is a mixture of neem oil and liquid soap. However, these measures would do nothing with large infestations. A more powerful insecticide would be a better option for pest control here.

Scales are among the common pests that attack the Burning Heart plant, whether it’s indoor or outdoor. It comes in large numbers and renders the plant sickly and weak. There are several types of scale insects, and most of them are vicious.

Combating these insects is quite similar to dealing with an aphid infection. A strong insecticide is your best bet.

An outdoor patch of flowers is constantly under attack by birds, squirrels, rabbits, and deer. The smaller mammals often take a bite and move on. Dear, on the other hand, eat far more than a bite. Especially if they are a big herd and they visit the place often.

The Bleeding Heart plants are typically safe and secure from these animals. Their inherent toxicity is usually a great repellent to most herbivores.

There are times of scarcity or occasional drought though, and in these instances, the deer find that anything at all is better than starving. They do have a point there, but this plant would really make them sick.

This issue is problematic only when the Bleeding Heart flowers are planted outdoors. Potting them indoors eliminates this possibility entirely. Thus, if your blooming flowers are kept inside the house, you can move the blame from the deer, and maybe observe the house pets a bit more.

House pets are usually a little less careful about what they eat than wild animals. This might be one of the side effects of domestication.

Thus, if they come across a blooming Bleeding Heart plant, with its plump pink flowers, they might get curious and decide to explore the matter up close and personal. For a pet, this typically means tasting it.

Cats, dogs, hamsters, and even tortoises might make the rash decision of biting off a chunk of the Bleeding Heart.

Eating this plant isn’t lethal most of the time, but it could make them very sick. So if the day after you notice that the house pet is lethargic and the plant is eaten, then you can make a connection. Both situations might correlate nine out of ten times!

Plants need a lot of care and attention to stay healthy. We can enjoy the lush greenery and colorful blooms as long as we understand how to keep our plants happy. And a huge part of that is knowing what are the potential threats to every plant.

The Bleeding Heart is a mighty plant with strong natural defenses. Yet, it has its own vulnerabilities. While most mammals would be too scared of what might happen if they eat from it, a number of pests and insects do not have any of these qualms.