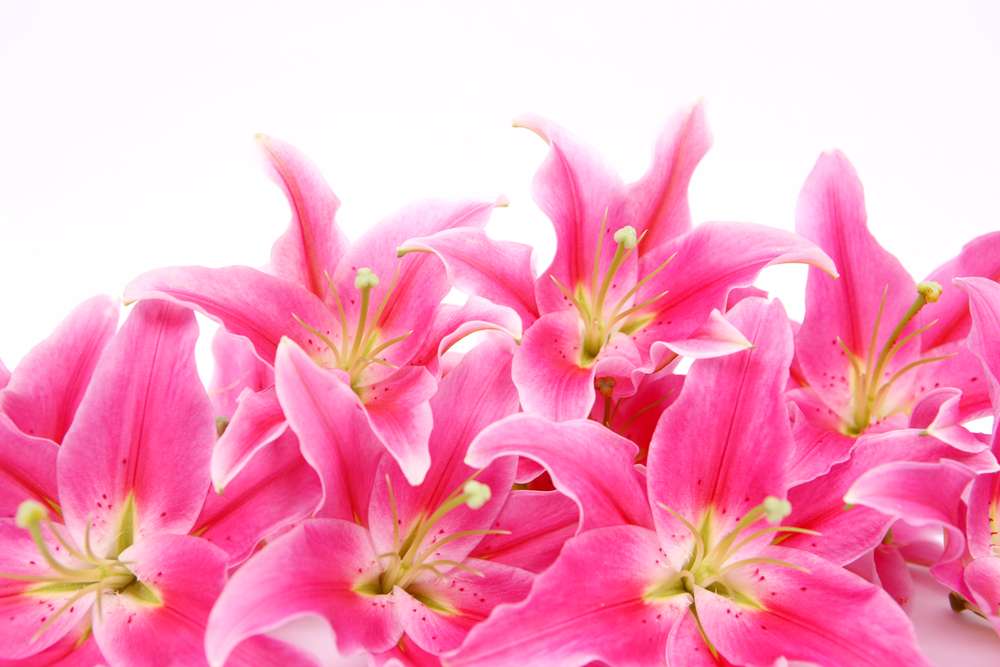 Stargazer lily is a unique species of lilies, as it’s actually a man-made variety that has been in existence for only a few decades. The flower is characterized by its stunning beauty and fragrant scent, making it an ideal decoration in gardens.

When it comes to symbolism, the stargazer lily meaning is as lovely as the flower!

Stargazer lilies are popular symbols of ambition and wealth. However, as hybrids of oriental lilies, they’re extremely similar in shape and color. For that reason, stargazer lilies also represent purity, innocence, chastity, rebirth, gratitude, and apology.

If you want to find out more about stargazer lilies, their origin, and when you should use them, this guide will have you covered with all the details you’re going to need. So without further ado, let’s jump right in!

Before diving into the juicy details of the stargazer lily, let’s have a brief overview of the flower’s origins and the reason why they’re called this unique name.

The stargazer lily is actually a hybrid lily that was developed by a California based lily breeder, named Leslie Woodriff.

The first stargazer lily was produced back in 1974 to overcome a commercial drawback of the Rubrum lilies.

These lilies had the same look and coloration as the stargazer lilies, except they had a downward facing orientation, giving them an unappealing, wilted look.

Like the Rubrum lily, this one is also an oriental lily hybrid and shares a lot of features with the original plant.

This includes the star shaped petals of the flower that shine in various color shades, such as red, pink, white, and yellow.

When stargazer lilies bloom, they face upwards towards the sky, hence the name “stargazer lilies. The flower became an instant success and continues to be one of the most popular types of lilies out there.

What Does the Stargazer Lily Flower Symbolize?

The symbolism of stargazer lily flowers is derived from their pretty look and sought-after status as well as their association with other lilies and their vibrant colors. Let’s have a brief overview of these symbolic meanings:

The most unique meaning of the stargazer lily is ambition and success. This is perhaps derived from the huge success that the flower had when it was first produced in the 70s.

Today, many people associate the successful story of the stargazer lily with interpretations like prosperity, commitment, passion for what you do, and fulfilling your distant dreams.

Another meaning that is highly associated with the status of the stargazer lily is wealth. Lilies, in general, are known for being relatively expensive when you compare them to many species of flowers.

Additionally, since stargazer lilies are unique species of lilies, it comes at a hefty price, and a bouquet of 20 to 50 stems can go for hundreds of dollars, depending on where you’re buying them from.

For that reason, stargazer lilies are often seen as a symbol of wealth and financial success.

Although stargazer lilies are quite unique, at the end of the day, they’re still lilies. And like all lilies, the stargazer lily remains a symbol of purity, innocence, and simplicity.

Lilies are also a symbol of reincarnation and rebirth in various civilizations, especially in the story of Hera and Zeus. Legend has it that Zeus wanted Hera to breastfeed Hercules, but she refused because he wasn’t her son.

Zeus then tries to sneak out some of her milk to Hercules while she was asleep. However, Hera woke up and pushed the milk away.

The spilled milk on the ground grew into white lilies, hence the meaning of rebirth and reincarnation.

The colors of some flowers are sometimes the main aspect behind their meaning, and stargazer lilies are no exception to this rule.

Although stargazers come in different colors, the most popular color is the one that features deep pink with freckles of red and yellow in the center along with whitish margins.

Pinkish hues are known for being a symbol of gratitude, friendship, and apology in many flowers, including the stargazer lily.

What Do Different Colors of Stargazer Lily Mean?

Since stargazer lilies are hybrids of other kinds of lilies, they have relatively limited variations of color. When they were first developed, stargazer lilies were only available in pink color.

However, with time, new variants of the flower have emerged, which include new colors, and therefore, added a new depth to the stargazer lily meaning!

The pink stargazer lily is the most common one out there, so it’s considered the standard of stargazer lilies, and it symbolizes ambition, success, and good fortune. Additionally, like all pink flowers, it can also represent gratitude and apology, as previously established.

In addition to pink, there are also white stargazer lilies, which are considered a symbol of reverence and purity, which goes in line with other general interpretations of lily flowers.

Lastly, there are mustard yellow stargazer lilies. These lilies are known for the saturation and vibrancy of their color.

This one is a symbol of friendship and joyous summer days since the flower blooms in mid to late summer.

Does Stargazer Lily Have Meanings in Different Cultures?

Since stargazer lilies are relatively new to the floral scene, they don’t have any exclusive meanings in different cultures and mythologies.

However, since they’re a hybrid of oriental lilies that retains a lot of features from its parent flower, most stargazer lilies interpretations are associated with the symbolism of lilies in other cultures.

For example, the oldest representation of lilies dates back to the bronze age, particularly in the Minoan culture. According to paintings of lilies on their walls, lilies held a sacred value even before the dawn of civilization!

The flower is also associated with Greek Mythology, as it was believed that Hera, the Goddess of fertility, created the lily flower by accident, as previously mentioned above.

Roman Mythology also had its take on lilies, as it was believed that Venus, the Roman goddess of beauty, is the one who added the long yellow pistil to the lilies because she was jealous of their beauty.

In history, some civilizations also used these beautiful flowers to mourn the death of children. On the other hand, Ancient Egyptians saw lilies, especially water lilies as a sign of rebirth and associated them with the sun.

In addition to all that, lilies have long been associated with the Virgin Mary and Christianity, which made them a symbol of purity and chastity to this day.

What Are the Best Occasions to Gift Stargazer Lilies?

Now that you know more about stargazer lilies and what they can mean and represent, you might be wondering about the best occasions to use them as a gift.

Since stargazer lilies are pretty and associated with positive meanings, it’s a highly sought-after flower that can be gifted at just about any occasion. With that said, here are some situations where it would make a perfect choice:

As a flower that is deeply associated with wishes of prosperity, ambition, and success, you can use the stargazer lilies for outdoor decorations.

In fact, stargazer lilies can also be used for indoor decorations if you’re willing to take extra care of them!

Any flower lover would appreciate the beauty of stargazer lilies as a birthday gift. The flower is also used as a gift on mothers day, Easter, and other springtime occasions.

Additionally, lilies are the official 30th anniversary flower, so you can use stargazer lilies on that special occasion to celebrate your gratitude to your loved ones.

In addition to being used as a workplace decoration for motivation and productive vibes, you can also use the flower directly as a gift for someone who has recently got promoted or is approaching a new chapter in their life.

As a symbol of success and prosperity, it’s an excellent gift to wish them good luck in their new adventure or congratulate them on their massive achievements!

Last but not least, like other pink colored flowers, the Stargazer lily is a great way to send your apologies and gratitude through a gift.

In fact, even the symbolism of rebirth can be interpreted as starting a new chapter in life after apologies, which makes these lilies a great choice here as well.

There you have it! A complete guide that walks you through everything you need to know about Stargazer lilies’ symbolic meanings and what the flower may represent.

As you can see, the stargazer lily is originally an oriental lily hybrid, which explains why the two species have extremely similar symbolic meanings, such as innocence, purity, apology, and gratitude.

However, the stargazer flower also has its own interpretations and meanings, which are mostly related to wealth, prosperity, and success, making it an excellent gift after promotions and major achievements, among other occasions!