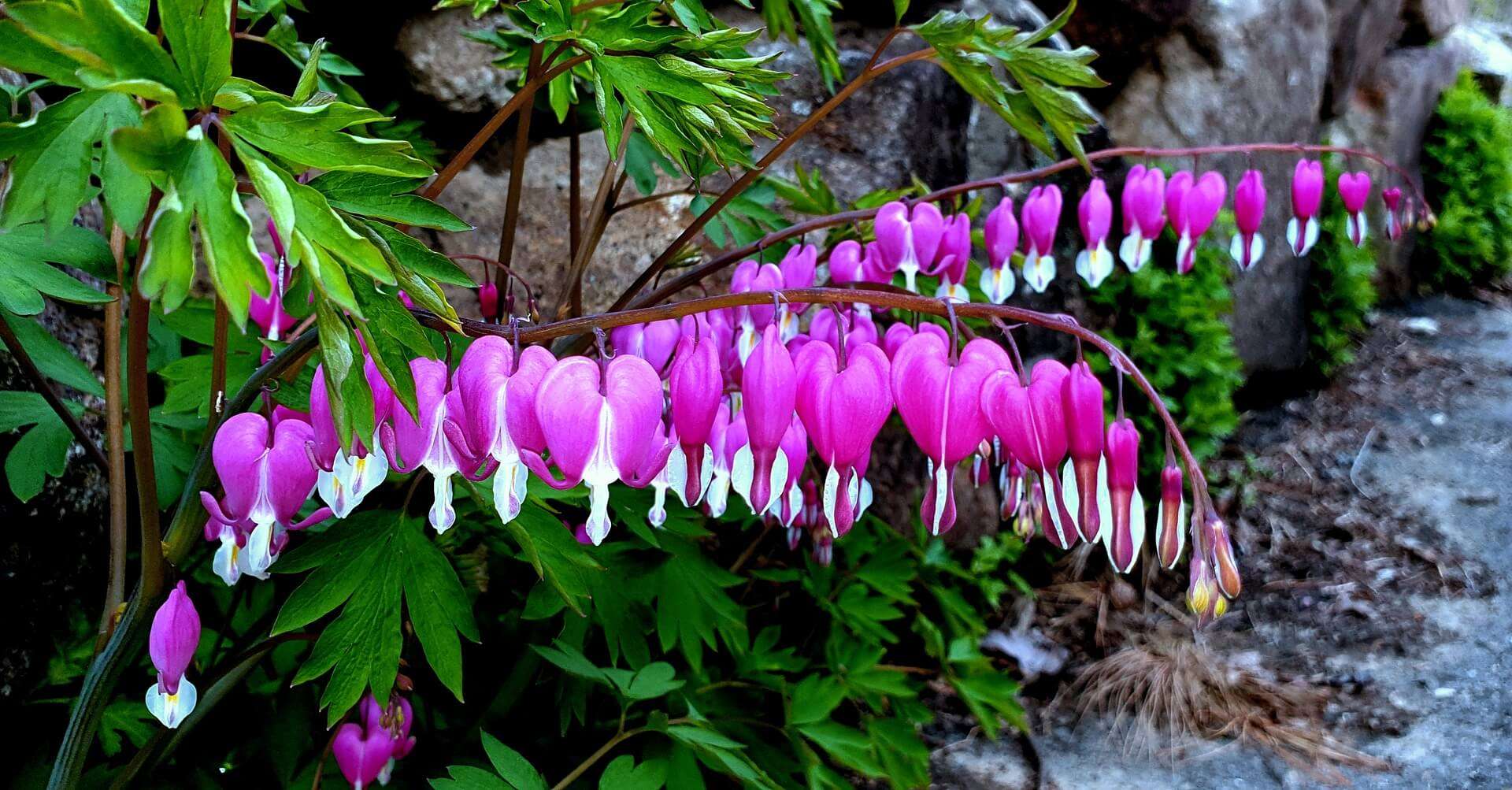 The red bleeding heart vine, also known as Clerodendrum bleeding heart or harlequin glory bower, is a tropical flowering vine that hails from west Africa. It’s one of the fastest-growing flowering vines in the world, which is why it’s often used to cover arbors, trellises, and chain-link fences.

Known for its showy clusters of sweet-scented white-and-pink buds, the red bleeding heart vine can grow up to 15 feet at maturity. They’re relatively easy to take care of, and with enough care and support, this vine will bloom year-round.

Read on to know more about the beautiful red bleeding heart vine, and how to best take care of it!

The red bleeding heart vine is a semi-deciduous climber that belongs to the genus Clerodendrum. It’s native to tropical West Africa, particularly from the west region of Senegal to Cameroon, but has now become naturalized in almost every part of the world.

Although widely believed to belong in the Lamiaceae mint family, some publications still classify the plant in the verbena family, where it originally belonged. The red bleeding heart vine was moved to the mint family in the 1990s when phylogenetic studies showed the differences between the two family groups.

The official name of the red bleeding heart vine, Clerodendrum thomsoniae, was named in honor of Dr. William Thomson, the 19th century head of the Calcutta Botanic Garden.

When placed in containers, the red bleeding heart vine can grow up to three feet. Given a permanent spot to grow and climb, the vine can reach a staggering 15 feet.

The flowers of the red bleeding heart vine are fragrant but not overwhelmingly so. Unless you breathe in deep, the scent doesn’t appeal much to the senses. They’re a rich source of nectar, though, so you’ll likely see hummingbirds and butterflies sipping on the flowers during spring and summer.

Unlike the common bleeding heart, which is toxic when ingested, the flowers and leaves from the red bleeding heart vine don’t have any toxic effects on humans, dogs, cats, livestock, and birds.

How to Care of Red Bleeding Heart Vines

Red bleeding heart vines aren’t the fussiest plants, but they need to live in specific conditions to thrive.

Red bleeding heart vines must be placed in full sun or partially sunny areas without protection to grow properly. If they don’t receive adequate light, they may not flower. The vines blossom the most in bright light, so they’re best placed outside or in a south-facing window inside.

Red bleeding heart vines prefer rich, well-draining soil, preferably mixed with lots of organic materials such as green manure and organic peat moss. The soil must be consistently moist but not soggy, lest they develop root rot.

These vines should be fertilized three times a year—in spring, summer, and fall—to help them reach their maximum height potential and promote bloom. If the flowers aren’t blooming as much as you want them to, supplement the feedings with liquid fertilizer or bone meal.

Like most vines, red bleeding heart vines should be transplanted in early spring. Dig them up and repot them in a larger pot with proper drainage holes.

If you want to let the plants ramble as a vine, add a trellis or some type of support to their new location. Otherwise, pinch them back into a shrub-like form so they won’t sprawl freely over the ground. You can also transfer them to a hanging basket.

Red bleeding heart vines are water-thirsty plants. They need to be watered every day for a full month when transplanted, and three to four times a week thereafter. The soil must constantly be moist to the touch but not soggy.

In colder months, from mid-November to mid-February water only when the soil is dry. Don’t fertilize during this period, either. You’ll notice a few of the leaves fall and dry, but don’t worry; new leaves will resprout when spring comes.

Red bleeding heart vines are easy to propagate; at least compared to other vines. They’re propagated with serpentine layering or cuttings. Semi-ripe cuttings that are taken in late spring or summer can be placed in moist sand or water until new roots sprout, which should appear in about two or so weeks.

You can also use a potting mixture of perlite and peat moss, but make sure the moisture is consistently moist throughout the propagation period.

Bleeding heart vines are fast-growing but non-invasive, so they won’t overtake your garden if you don’t prune them.

However, you may still want to prune the plants throughout the year to keep their appearance and control their growth. You’ll also want to remove any errant stems, especially those that are growing away from the support you’ve added.

Root rot is usually caused by overwatering. Since bleeding heart vines are water-thirsty, it can be easy to overwater them. The rot can spread to healthier roots and kill them, so they must be separated ASAP before further infection occurs.

Roots that have already rotted can’t be treated, but you can still save the healthy roots. Remove the affected roots with a clean pair of shears and discard them. Then, wash the healthy roots under running water to wash away the infection spread by the damaged roots.

Botrytis blight, or, as it’s more commonly known, gray mold, is a fungal disease that attacks tender parts of a plant during especially high humidity. This fungus causes discoloration, spotting, and wilting, and may prevent buds from spouting. Prevent this by keeping the vines in an area with good circulation and transplanting them every three to five years.

As for pest infestations, red bleeding heart vines are often targeted by spider mites and mealybugs. Luckily, these insects can be killed with ease. When you spot them partying in your vines, spray them with organic neem oil or wash the plant with soapy water.

Red bleeding heart vines are beginner-friendly plants with easy care instructions. They thrive under full but indirect sunlight and moist soil. They must be watered two to three times a week to keep the soil consistently moist. Cut back on the watering during winter so they can go dormant, and resume watering when springtime arrives.