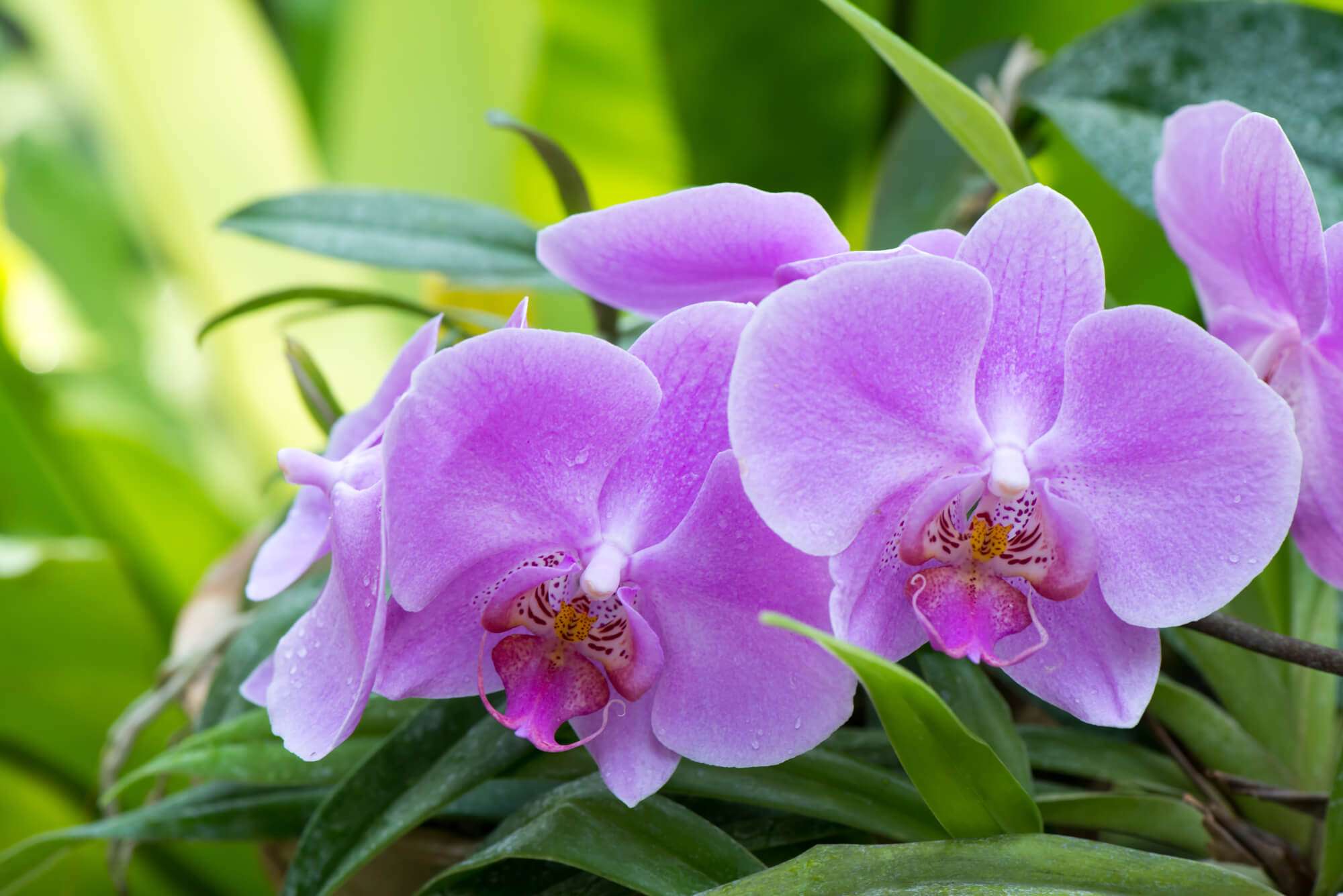 Orchids are some of the most unique-looking flowers you’ll ever come across. When you add purple petals into the equation, you get quite the head-turner, but did you ever wonder if there was a particular symbolism to the purple orchid?

In this post, I’ll discuss purple orchid meaning and symbolism; and how to make the most out of them either in your home or as gifts. Let’s jump right in!

Purple orchids, in particular, represent respect and sincere admiration. They reflect royalty and dignity. Orchids, in general, symbolize fertility, wealth, power, and good luck in different cultures around the world.

In psychology, the color purple is often associated with brave, wise, and spiritual individuals. It’s the kind of color that pairs the calmness in blue with the fierceness of red.

That representation is probably where it all stems from with the meaning of purple orchid flowers.

In a sense, they reflect that you think a person is courageous, ambitious, and worthy of your respect. That’s why they’re particularly common in gift bouquets and flower arrangements.

Although some shades of purple might reflect frustration, those are far off from the orchid’s brilliant colors. Instead, it’s the darker violets that might reflect sad energies.

However, with light-purple petals, the orchid radiates a positive and calming feeling that relates to power and nobility.

Orchids can signify different meanings depending on the color. For instance, orange orchids would reflect more boldness than the reverent white variety.

Yet, if you look through history, you’ll notice a few shared perspectives among the various colors, including purple orchids.

Let’s take a look at a few highlights of what orchid flowers represented throughout history:

Orchids have a rich history with Greek cultures that trace back to around 300 BCE. Theophrastos, a celebrated botanist, decided that the flower represented male sexuality. From then on, the plant became famous as a fertility symbol.

So, it might not be weird to know that people at the time would consume orchids, believing that the flower is a powerful aphrodisiac.

Some even believed that different parts would influence the gender of the baby. Believe it or not, a father in ancient Greece could eat large orchid tubers in hopes of birthing a baby boy.

However, there are also ties between orchids and the Greek mythology of Orchis, the son of a nymph and satyr. It also holds very similar representations of fertility and reproduction.

During the Victorian era, a passion for orchids swept across the royal class in what was known as the Orchidelirium or the Orchid Mania.

Aristocratic families went to great lengths to make sure they got their hands on these exotic flowers. To get orchids, they’d need large Wardian terrariums to keep the plants viable through shipping.

At the time, owning and showing off orchids was a pursuit in itself. Add to that the fact that purple is a royal color, and you have the purple orchid that reflects wealth, elegance, and abundance.

This might have been highly influenced by Charles Darwin’s work with orchids back in 1862. Either way, it’s not hard to imagine why the dazzling petals caused all this racket!

In fact, you might even spot similar perspectives from ancient Japanese culture. By then, the orchids were a thing of power, good fortune, and luxury.

In Aztec culture, the orchid flower represented great power. They used the flower extract as a medicine to heal ailments, believing that it possessed abilities beyond its beauty.

Up to this day, people often resort to purple accents in their fabric and home decor to reflect their social standing. So, it looks like we might be still following the footsteps of that intense orchid passion that swept over the Victorian era royalty!

The delicate pink and purple dendrobium orchid flowers were often used in the practice of Traditional Chinese medicine. Their extracts and teas were thought to help with stomach upset and inflammatory diseases.

However, there’s more to orchids than just that in Chinese culture.

If the geomancy and harmonizing of the environment sound tempting, you might be interested in uncovering the orchid’s Feng Shui.

Both pink and purple orchids work nicely in the bedroom to add an auspicious vibe or show your gratitude to a loving partner. Those will work best in the Southwest Kun in the most active area of the bedroom if you pair it with earth tones.

Meanwhile, you can also use the purple orchids in all the areas in your Bagua energy map that you want to reflect wealth and stability. Make the most out of the purple and wood balances in this area for the best visual effects.

If you have a small office space in your home, adding a touch of orchids can also add a sweet aroma to keep you refreshed!

The history of orchid flowers is so rich that it could keep you entertained for a long while. However, one of the highlights to share here is its relevance to ancient Roman art.

If you ever get to visit Rome, you might get lucky and spot the magnificent Ara Pacis or the Altar of Augustan Peace. Then, if you look at all the intricate designs, you’ll be able to spot the delicate orchid flowers ornating the altar.

It’s also worth mentioning that the monument was commissioned back in 13 BC in the honor of Caesar Augustus, the Roman emperor.

Within the altar, the orchids signify peace, royalty, power, respect, and a whole lot of emotions that you might draw out of the artwork.

Some of the orchids represented are realistic portrayals of species that were relevant at the time. However, others are fantasy renditions of the pure concept of orchids.

To think that even back then, the Orchid Mania had inspired the artists!

However, the use of orchids in art might have turned down a notch when people started to steer clear of boldness.

Who to Give Purple Orchids to?

Ideally, you’ll want to give a bouquet of purple orchids to someone you hold in high regard. It could be a teacher, a boss, a parent, or even a partner. It’s the perfect way to show your sincere admiration for someone.

They might even pair nicely with a gift for an expecting couple waiting for a new healthy member of the family to join them safely.

Alternatively, you can choose to get an indoor pot of purple orchids and keep it in your workplace.

All you need is an eastern or southern-facing window with plenty of bright but indirect sunlight and high humidity. To maintain a balance between the humidity and the drainage, you could use a pebble tray.

However, you’ll also have to keep in mind that they’ll need a bit more attention during their growing season. You might need to fertilize weekly during the growing season and then cut back to once a month when the plant is established.

It will work even better for someone who’s a history buff. People with a particular interest in mysteries of Greek mythology or the elegance of the Victorian area will appreciate it!

Giving someone a bouquet of purple orchids usually signifies that you hold great respect for them. It says you think they’re wise, dignified, brave, and worth looking up to.

For personal use, purple orchids can reflect pride, wealth, and abundance. After all, purple and violet are considered royal colors for many people!

Do you have someone in mind that would make a perfect owner of a nice arrangement of purple orchids yet? We’d recommend someone who’s celebrating a long-waited success!