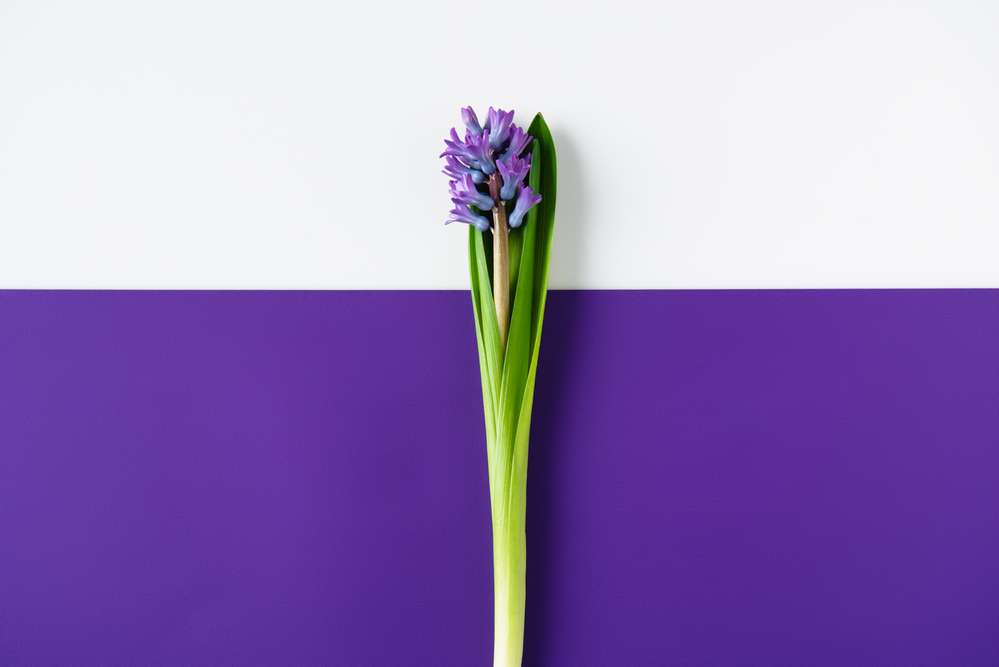 Hyacinth, also known scientifically as “Hyacinthus orientalis”, is a bulbous richly blossomed flower that is characterized by its unique look and noticeable scent. Although the flower comes in various colors, one of its most characteristic colors is purple.

If you want to find out more about hyacinth flower meanings and origins, this guide will have you covered with everything you need to know. Let’s dive right in!

Origin and Etymology of Hyacinth Flower

Hyacinth is a genus of perennial flowering bulbs that belong to the family Asparagaceae. The flower is originally native to regions around Eastern Mediterranean, especially Greece and Bulgaria. However, some varieties also originated in Palestine.

The plant’s name is said to date back to a non-Indo-European language, but the true origins are debated by historians.

Some say that the flower’s name is derived from the Greek story of Hyakinthos and Apollo, But more about that ancient tale in the following sections!

The word “Hyacinth” was also used to refer to a kind of precious stone that was in shades of blue or red. Although some researchers believe that this stone is actually sapphire, the exact identity or color of the gem is still debated among historians.

What Does the Purple Hyacinth Flower Symbolize?

Purple hyacinth, also known as “Woodstock Hyacinth”, is known for its maroon-purple color. The bulbs bloom in mid to late spring and have a unique scent. Let’s have a brief overview of the different meanings that this special variant conveys:

The color purple has always been associated with elite status and elegance, not only due to its impressive hue, but it’s because purple dyes were extremely rare and expensive in old times.

For that reason, a lot of kings and queens in history wore purple capes to show off their wealth. This association with nobility remains popular to this day.

As a result, the purple hyacinth, like many other purple colored flowers, is considered a symbol of royalty and elegance.

The elegance of the purple hyacinth makes it an ideal flower to display respect. If you want to show someone that you have a lot of respect for them, gifting them with purple hyacinth would be a great idea.

In addition to respect, purple hyacinth is a sign of admiration and gratitude, so you can also use them to show appreciation after noble gestures.

In addition to respect and gratitude, some people also use purple hyacinth to seek forgiveness and show regret.

This goes in line with the story of the hyacinth flower in Greek Mythology, in which the flower got its name as a way to seek forgiveness.

Another meaning that is also associated with the story of Hyakinthos in Greek Mythology is sorrow. It also fits the general symbolism of the hyacinth flower, which is “mourning the dead”.

To this day, the hyacinth flower is used in funerals and is not uncommon to be gifted on memorial days in the years following.

In some cultures, planting a single hyacinth flower in the front garden of a house means that the family of the house has lost one of its members.

It was not uncommon for widows to be gifted bouquets of white Hyacinths at funerals and in the years following.

Different colors have different impacts on our feelings. Purple is generally a symbol of spirituality, wisdom, and being connected with nature and what’s beyond, especially the lighter shades of the color.

In addition to all the previous meanings, a purple hyacinth represents devotion to loved ones, when they’re far away.

When loved ones gift each other with hyacinth, the hidden message here is “I love you forever and beyond”.

What Do Other Colors of Hyacinth Flower Mean?

Here’s a quick look at those different colors and what they represent:

Dark blue Hyacinth is one of the most popular types of the flower. It’s commonly known as “Blue Jacket”, and it represents positive vibes of the flower, such as respect, chivalry, elegance, and hopes for a better tomorrow.

The light blue hyacinth is also extremely common when compared to other shades of the flower. Since it’s the color of the flower mentioned in the Legend of Apollo and Hyakinthos, it represents eternal love, spirituality, sorrow, and mourning loved ones.

The light blue flower comes in different variants, including the “Blue Star” and the “Delft blue” hyacinth.

The white variant is also associated with prayers for prosperity and well being. There are several white hyacinth varieties, and the most popular ones are the White Festival Hyacinth.

This variant is known as “Hollyhock Hyacinth”, which comes in a wide range of shades that extend from light pinkish red and up to deep candy red and pink hyacinth.

Like all other red colored flowers, the Red hyacinth is a symbol of passion, romance, and desire. However, the red hyacinth specifically can also mean playfulness and harmless mischief.

While all the previously mentioned hues had positive vibes. Yellow hyacinth can carry some negative ones, but lucky for you, they’re pretty rare.

Yellow hyacinth usually represents envy and jealousy of success, which makes it an unfavorable option when it comes to flower gifting.

However, the bright color of the hyacinth also makes it a cheerful flower, so you can still use it in decorations to enjoy its beautiful looks and avoid being misunderstood!

The Meaning and Significance of Hyacinth in Other Cultures

Different cultures also had different interpretations of the hyacinth flower. In this section we’ll explore the significance of the flower in other cultures:

Hyacinth was pretty popular in Greek culture and even had a few mentions in its Mythology tales. For starters, the flower was seen as a luxury status among nobles and aristocrats, so it was a common flower in the gardens of wealthy individuals during the time.

The reason why hyacinth was believed to be a sign of status dates back to the old legend that Zeus( the Greek god of the sky) slept on a bed that was made of these beautiful flowers.

Additionally, as previously mentioned, the word hyacinth is derived from an old Mythology fable. In this story, Apollo (the god of the sun) and Zephyr (god of the wind) competed over the devotion of a boy named Hyakinthos.

While Apollo was teaching Hyakinthos how to play quoits, Zephyr blew wind towards the discus in order to strike Hyakinthos, killing him accidentally. The blood of the young boy mixed with the soil, from which the first hyacinth flower emerged, hence the name.

Similar to the Greek culture, hyacinth was also seen as a luxury status flower, so it was pretty common in the gardens of nobles and aristocrats at the time.

During the rise of floriography in the Victorian era, hyacinth represented playfulness and harmless mischief, which remains the meaning of red and pink hyacinth to this day.

When Should You Use Purple Hyacinth?

Purple hyacinth is a pretty flower that emits an amazing scent. While it can be a nice gift to anyone who likes flowers, it’s considered a great choice if you’re using it to show someone your respect and gratitude.

The flower is also a sign of luxury and elegance, so you can use it in garden decoration to add a distinguished touch.

Purple hyacinth can also be an apology gift because it symbolizes forgiveness. Some people might also use it to tell someone that they’re not alone in their difficult times.

Remember that other colors of the hyacinth flower have different meanings, so make sure that you check them out if you’re planning on combining different flowers.

This marks the end of today’s guide about the meanings of the beautiful hyacinth flower, especially the purple variety.

As you can see, hyacinth is one of the most elegant flowers when it comes to outdoor decorations.

Additionally, the flower carries a variety of meanings, making it a pretty symbolic one, especially when it comes to different colors.

When it comes to the purple variant, hyacinth generally symbolizes royalty, elegance, forgiveness, and devotion to lovers.

However, be careful while using other flowers with symbolism in mind, as some variants, such as the yellow hyacinth, represent negative aspects like jealousy.