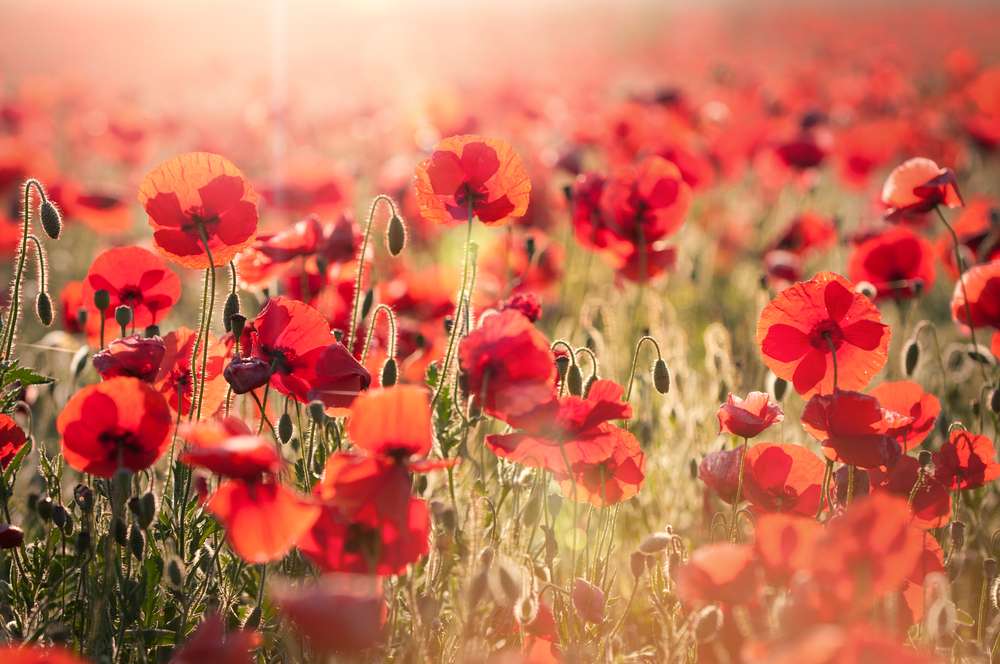 Poppy flower spiritual meaning is derived from cultural, social, and physical significance. The flower is extracted to make opiates such as morphine which can promote sleep and pain relief.

That being so, it’s unsurprising that poppies are associated with dreams, imagination, and sometimes, death. Now, where spirituality is concerned, these wildflowers identify with the eternity of the soul and reincarnation.

To make sense of all this, stick around to learn more about the spiritual, cultural, and symbolic meaning attached to poppy flowers.

Origins of the Poppy Flower

Since poppy flowers carry a lot of meaning, they’re naturally brimming with historical backgrounds. Poppies can be traced back to 3400 BCE during the growth of the Sumerian civilization in lower Mesopotamia.

Today, that’s where Iraq and Kuwait are located. The Sumerian people understood the medicinal benefits of using poppy seeds. Soon, poppies gained popularity and were traded to the Assyrians and Ancient Egyptians.

Poppies blew up when they began their journey on the Silk Road to all over Asia. From then on, the wildflower made its mark in the opium wars in China. Afterward, the flower gained a positive symbol as a remembrance of the fallen soldiers in World War 1.

You might’ve noticed people wearing these poppies as a tribute, but why poppies? Well, during a clash in Flanders, France, lots of bodies were buried. On that very battleground, red poppies grew and became a strong symbol of hope.

The Etymology of Poppy Flowers

It’s ironic how a flower with such a happy ring to it can hold a bit of heavy-hearted meaning. It begs the question, “What does poppy mean?”

Poppy is derived from the Old English term, “popig.” This comes from the Latin word, “papaver.” It roughly translates to “to eat.”

Another Latin interpretation for poppy is “pappa,” which means milk. The explanation could come from the milky substance oozing within the poppy flowers’ stem when cut.

The word poppy may also have Celtic origins since it translates to “papa,” otherwise known as, porridge. The association could come from the common tradition of adding poppy plants to a child’s meal to induce sleep.

What Do Poppy Flowers Mean?

Poppies have a lot of symbolic characteristics, but what does it generally represent? The meaning usually goes deep into the spiritual world.

You may think about adding some poppies in your backyard. They’re undeniably pretty and add a pop of color to the green background, after all.

When it comes to the flower’s connotation, it can embody the souls of your loved ones that have passed away.

Poppies are also found in funerals as a remembrance of the soul that passed on. Building on the religious theme, poppies meant a great deal in Christianity.

Christ’s blood was heavily associated with poppies. The flowers also signified his regeneration and entrance into heaven.

Poppy flowers can be extracted to become heavy sedatives. No wonder they symbolize dreaming and imagination.

The wildflower depicts the criticality of dreams and what they’re trying to communicate to you in the real world.

Meanwhile, as you’re unconscious, poppies may expand your imagination. You can’t always get caught up with the realities of your life. The flower’s message is to let your imagination flow to make your life a little more bearable.

What Does a Poppy Flower Symbolize Spiritually?

Poppy flowers hold a deep spiritual meaning that originates from a variety of cultural perspectives. Let’s take a look at each one.

Poppies are a strong signifier of sleep, so much so that popular stories such as the fictional Wizard of Oz have incorporated this meaning.

In Dorothy’s adventure, she visits the witch’s castle. The area is surrounded by poppies meant to intoxicate any trespassers.

Of course, poppies can’t put you to sleep in their natural state. The story merely uses the flower’s symbolism of sleep.

If anyone knew best about spirituality, it was the Ancient Greeks. Their mythological background has interpreted poppies as a sign of death and sleep.

The flowers were synonymous with Thanatos, Hypnos, and Morpheus, all Greek Gods. If the latter’s name might seem familiar, it’s because this God of Dreams is similarly named after the modern sleep-inducing drug, morphine.

Meanwhile, Hypnos and Thanatos were the Gods of Sleep and Death, respectively. Both of the Gods are portrayed as wearing crowns adorned with poppy flowers.

Another Greek mythological character is also associated with poppies. The Goddess of Harvest, Demeter, was believed to have cultivated poppy flowers. Demeter was unable to sleep after her daughter, Persephone, was taken by Hades.

The poppies may have been her answer to finding sleep. Some myths stipulated that poppies grew where Persephone’s or Demeter’s footprints lay before her capture.

Similar to Greek mythology, ancient Egyptians also had legendary stories of spirits and the underworld.

One of the many ancient Egyptian Gods, Osiris, had a particular liking for poppy flowers. The God of Death and Agriculture’s link to poppies was due to their symbolism. In ancient Egypt, the wildflowers signified rebirth, peace, and eternal sleep.

The pretty flowers represented eternal life, which may be why the ancient society chose to bury poppies with mummies.

Apart from that, Egyptian culture capitalized on the plant’s medicinal value. Poppy flowers were extracted to relieve pain.

Poppy flowers come in a variety of spring and summer colors. Each color holds its spiritual or cultural meaning. Here are some of the poppy colors available and what they mean below.

When searching for poppy flowers, you may find it more difficult to find pink ones since they’re practically the least common.

Orange poppy flowers are correlated with rebirth and abundance in health. Their ruffled orange exterior can make a summery addition to your garden.

The yellow color most often points to joy and optimism. Since poppies symbolize souls that passed away, yellow varieties allow for more focus on the bright and positive memories of these souls.

When you see black, the first word that might come to mind is mystery. Black poppy flowers evoke that sense of the unknown and can also signify a deep sleep.

You can’t spot natural blue poppy flowers in your average garden unless you happen to pop by the Himalayas. These flowers are highly rare, but a true sight to behold. They may communicate a wide imagination and angelic intervention.

Similar to red poppy flowers, the purple kind also symbolizes the remembrance of fallen soldiers. Only in the purple poppy’s case, it’s to pay tribute to the fallen animals such as horses and dogs participating in the war.

Poppy flower spiritual meaning is abundant. From sleep, imagination, and dreams to rebirth, death, and eternal life, it’s tough to pinpoint these flowers into one category of symbolism.

The wildflowers also come in several colors, connoting respective meanings. One thing’s for sure, these flowers don’t fall short of spiritual symbolism.

That being said, poppies have made their mark in the pharmaceutical market and cultural connotation.

As small and common as poppies are, they’ll remain a large part of cultures of remembrance and mourning.