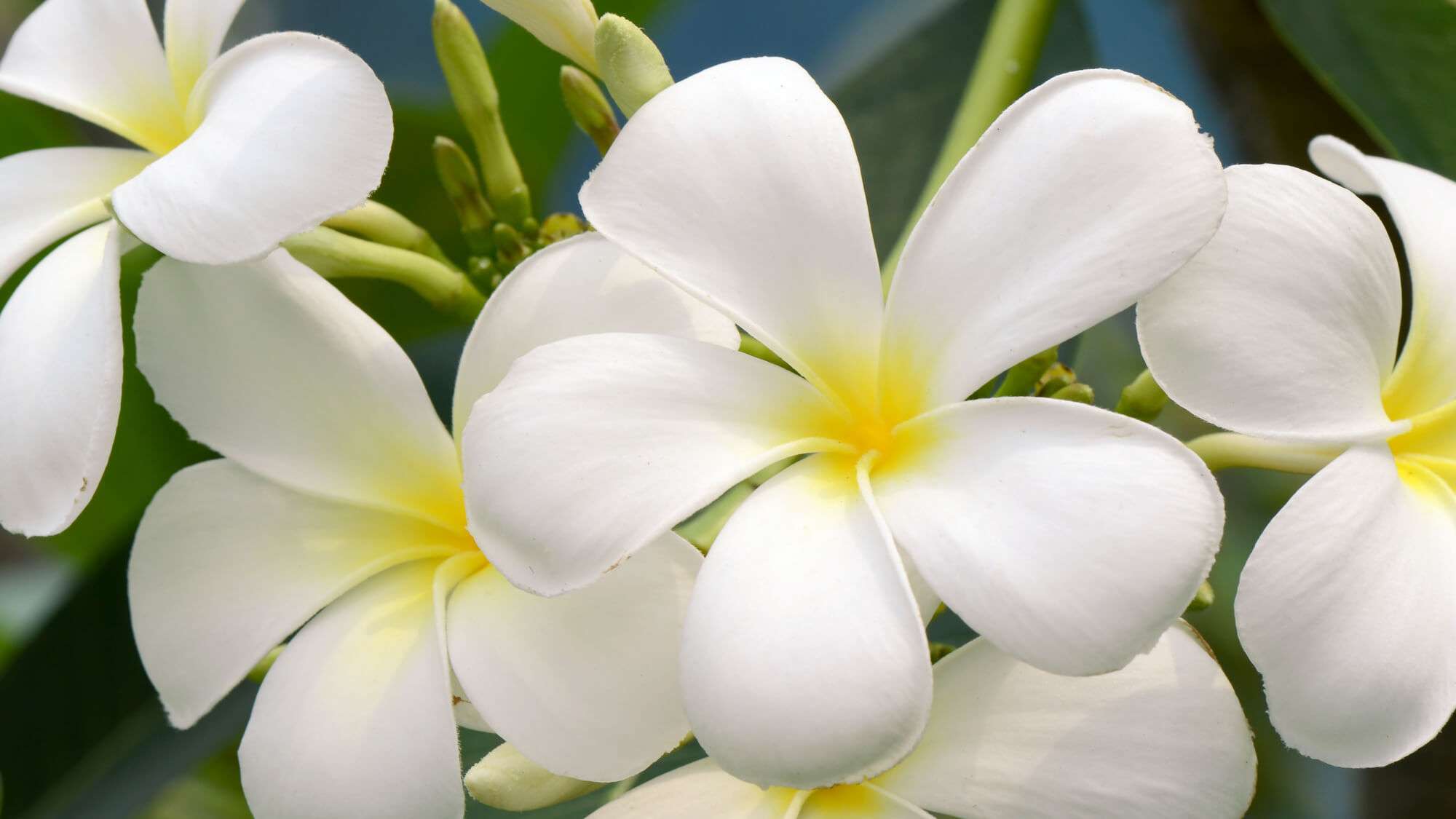 In this article, I focus on plumeria flower meaning across different cultures.

Plumerias symbolize fresh starts, rebirth, and joy. Depending on the culture, they could symbolize immortality, show devotion, or reflect a woman’s current relationship status. Yet, there also are some solemn death connotations to consider.

Plumeria Flower Meaning All Over the World

The plumeria is the bloom of the deciduous frangipani tree, and it comes in various colors, including white, pink, yellow, and even red. It’s usually perceived in a positive light, thanks to its delightful scent and elegant looks.

Asides from its captivating aroma, the flower can signify eagerness for new beginnings. It could also create a welcoming atmosphere for guests.

However, not every message you’ll send with the delicate plumeria is a positive one. Sometimes, it could be a symbol of death, grief, or ghost vengeance. That’s why you have to be aware of how and when you’re using the flower clusters.

Let’s take a closer look at what meaning the gorgeous plumeria carries in different cultures:

Wearing leis went from being a thing of royalty and nobility to something that everyone gets to do very easily. That’s because the Hawaiians use it as a symbol of joy, friendship, and positivity.

As it happens, the plumeria comes high on the list of flowers used in making these floral garlands—those and orchids.

Between tribes, handing out leis to a visiting chief was a gesture of peace, goodwill, and collaboration.

Today, even the tourists visiting Hawaii for a summer vacation get to wear them. From there stemmed the notion that giving out leis means welcoming someone or saying farewell.

Sometimes, you won’t even need a special occasion to treat yourself to a gorgeous plumeria garland. You could make it yourself with fresh flowers, a needle, and some lei twine. Then, you can wear it out to the beach with friends and take a few pictures.

You’d probably like it a lot better than the ancient leis made of bones, teeth, nuts, and sticks, anyway. Believe it or not, those were the primary materials for garlands at first!

2.   Openness to New Relationships or Loyalty to Existing Ones

Sure, putting a flower in your hair can make you look like a movie princess. However, in Hawaiian culture, people know that wearing a plumeria behind your ear has a deeper meaning than just the cosmetic level.

If a woman has the flower on the right side, it says that she’s romantically available.

Of course, the opposite also applies. That’s why someone might get a plumeria tattooed behind the left ear after getting married as a sign of devotion to their partner!

It’s not just the Hawaiians, though. Polynesians also use it in a similar way. Hindu brides, too, wear the delicate plumeria clusters on their hair to reflect loyalty.

Meanwhile, in Chinese cultures, giving someone a plumeria is a sign of love and dedication. After all, the flower isn’t particularly common there, and gifting it means that you’re serious about a relationship.

So, use your plumerias wisely and be aware of what message it might send about your emotions!

3.   Ties to Death and Immortality

You might come across a different solemn side to the plumeria flower than just joyous celebrations. It has a spiritual significance for a lot of people, and it’s not a stranger to temples or graveyards.

For one, the frangipani is found all around Buddhist temples as a sacred tree with connotations of immortality. This probably refers to how resilient and hardy the plant actually is.

Besides representing loyalty to a partner, the flower could also mean religious devotion in Hindu homes.

Meanwhile, the plumeria represents the opposite of immortality in other cultures. It’s not uncommon to see plumeria growing in Indonesian, Bengali, or Malaysian graveyards, where the plant is associated with death.

When you think about it, it’s kind of baffling that the same flower could represent two distinct and opposing concepts!

In Thailand, the way you’d say plumeria is highly similar to the word for sorrow. So, it’s not entirely unpredictable that the flower could hold a negative meaning for some people. However, this perspective is changing in favor of a more artistic landscaping approach.

Keep in mind that many cultures might associate white flowers with sorrow and grief. Those are ones you want to consider for a funeral service to say farewell to a loved one.

On the other hand, the pink, red, and yellow plumeria varieties generally reflect more vitality and joy.

In other parts of the ancient world, the delicate plumeria had a wide acceptance as a symbol of femininity.

There are Aztec glyphs that describe the white flower as the sak nikte that’s associated with reproduction and life forces. This explains why many people see the flower as a representation of female fertility.

Aside from the delicate and divine connotations, the frangipani also intertwines with more extreme Malay folklore.

You might have heard about vampires, but did you ever hear about the Pontianak and its association with the plumeria?

The Pontianak spirit is somewhere between a vampire and a ghost who sprouts from tragic accidents of domestic abuse or death during childbirth.

Where does the dainty plumeria fit in with all these thrilling folk tales?

Well, in folklore, the spirit smells a lot like the tree’s scent. If you’ve ever smelled frangipani, you’ll probably imagine a pleasant aroma, but it blends in with a rotting stench in the myth. Plus, the creature has a very ear-piercing scream that renders it unpleasant as a whole.

In Indonesia, there’s a very similar myth about a vengeful female spirit, but it’s called the Kuntilanak. Both have similar white dresses, piercing cries, vampire-like characteristics, and similar aromas.

So, all in all, the feminine aspect of the flower isn’t entirely positive in all cultures.

Throughout history, several cultures believed that the plumeria flower held medical benefits. It was used as a treatment for things ranging from respiratory problems to dysentery.

Some of the uses require the flowering parts of the plumeria. Meanwhile, other healing interpretations include the entire frangipani tree, especially the sap.

Either way, this only builds on the notion of the flower being a force of life with ties to human mortality. After all, many people probably saw it as a plant with abilities beyond their explanations.

However, it’s crucial to mention that the plumeria isn’t safe for consumption. You can’t ingest it or feed it to any animal.

Although traditional medicine referenced how the sap from the frangipani trees could heal bruises and toothache, its medicinal use is still not established.

In fact, prolonged skin contact with the sap can be dangerous and might even cause a rash in some cases. So, keep that in mind if you’re considering getting a plumeria tree and have sensitive skin or an overly curious pet!

Who knew that such petite flowers could hold all that depth? Plumerias are rich in symbolism and cultural relevance.

The plumeria flower meaning is versatile and depends on the context. It ranges from the joyous garlands on Hawaiian beaches to graveyards. It also happens to go by some interesting ghost and fertility folklore.

Yet, for the most part, the delicate clusters represent love, devotion, and embracing life’s twists and turns. Nothing says that better than a floral lei.

What upcoming occasion do you want to celebrate with a lei? It’s easier than you’d expect and smells absolutely divine!