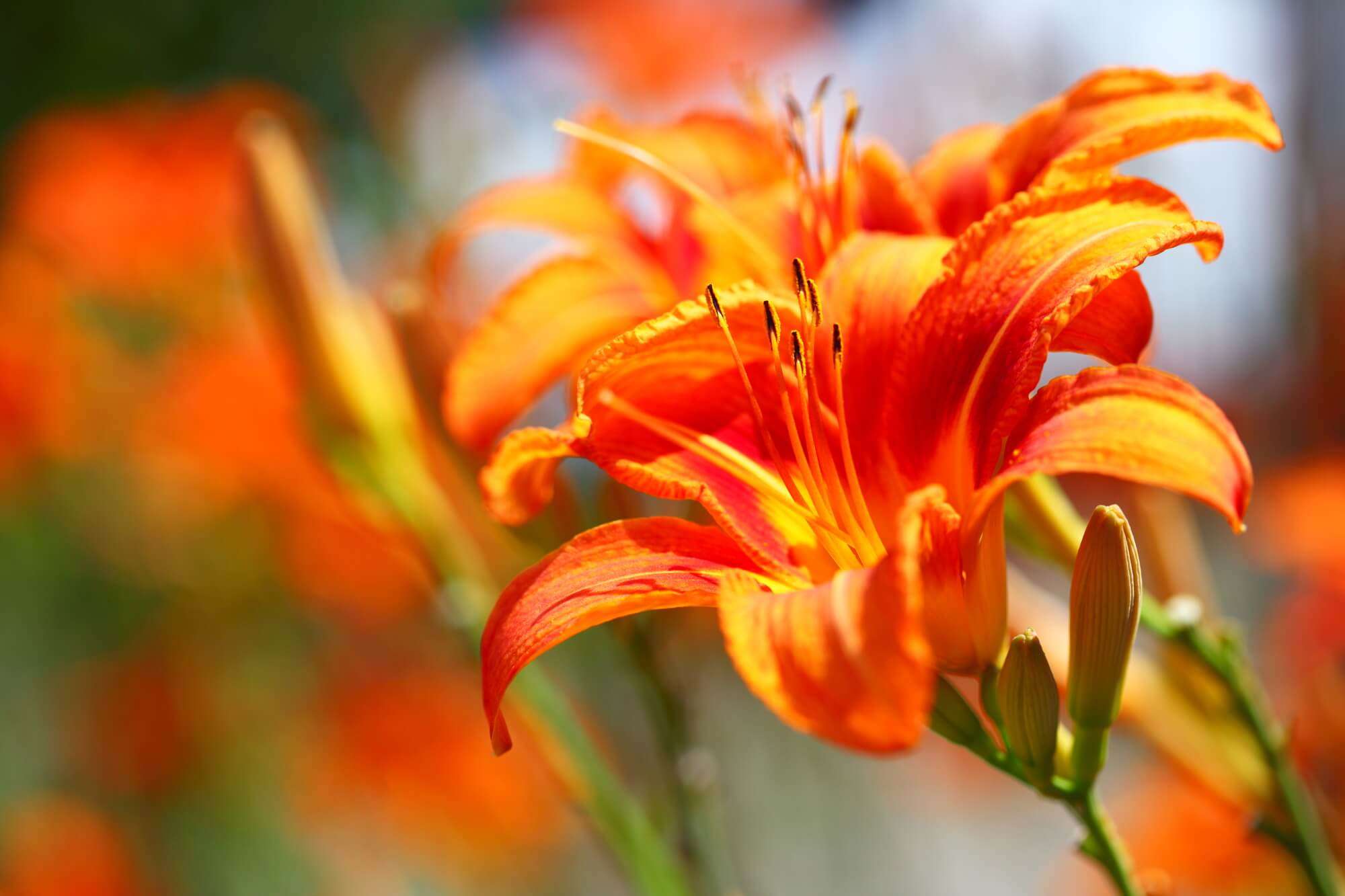 Whether solid or spotted, the orange lilies can be a valuable addition to any flower arrangement.

However, beyond this superficial beauty, there’s a lot to ponder on when it comes to the orange lily meaning.

Orange lilies can reflect devotion, wealth, self-assurance, vitality, and joy. They also have connotations around fertility and grief. However, they might reflect loathing if handed out in the wrong circumstances.

In this post, we’ll go over what these bold flowers mean, their cultural relevance, and how you can find the perfect use for them!

From a psychological perspective, orange is the color of energy, vibrance, and enthusiasm. That’s why it’s often used to boost enjoyment levels and grab attention in otherwise non-stimulating tasks.

In some cases, orange colors might even reflect a cartoonish and playful vibe. Yet, this doesn’t take from its spirituality one bit. Since we associate it with monk robes, it can also seem serene and serious in the right context.

For this reason, you might see orange lily flower arrangements used for anything from funerals to anniversaries. In fact, when you pair this high-energy color with a delicate flower, you get a general representation of devotion and joy in a long-lasting relationship.

Of course, not all orange lilies are a solid blotch of color. Some varieties, like the Lilium pardalinum, adorn a spotted pattern with burned brown dots all over. That’s why they got the name tiger (or leopard) lilies.

Meanwhile, the Clivia miniata, or the fire lily, has a bit of yellow in the center that adds a touch of warmth and a sense of familiarity.

Alternatively, the Michigan and Turk’s-cap lilies are less common in a bouquet. That’s probably because they’re turned upside down.

Across cultures, the lily flower managed to capture different meanings and emotions, from luck to femininity. Some of them happen to be specifically tied to the orange varieties, while others apply to the genus in a general sense.

Let’s take a closer look at the possible interpretations of lily flowers:

Lilies are often associated with womanhood and fertility. This notion is actually ironic when you consider that the orange Lilium bulbiferum is a hermaphroditic flower.

However, the association is in part due to the delicate and soft petals, but it’s not just that. In different cultures, the flower was intertwined into myths and tales.

One of the most common ones from Greek mythology is the story of how Hera’s breast milk sprouted lily flowers as a symbol of divinity, fertility, and purity.

However, it would make more sense to believe that the flower in the story is actually the white lily, not the orange one. Still, it can give you an idea about what the genus as a whole represents.

Yet another appearance of the flower in ancient Greek how muses are described to have a lily-like voice. Or how the oil of the Madonna lily bulbs was a cure for wounds in Roman times. The white lilies are also symbols of the Roman Venus and Ishtar from ancient Mesopotamia.

Meanwhile, in ancient Egypt, the concept of the Lily Lake represented the afterlife, rebirth, and spiritual judgment.

All in all, history and mythology are full of instances that explain why we came to see the lily flowers as pure representations of femininity and fertility.

With the peculiar looks, bold colors, and distinctive aroma, orange lilies can remind some people of funeral homes, and there’s a reason for that. After all, lily flowers are quite common in funeral ceremonies, especially peace lily varieties.

It’s just one of those flowers that people grew to associate with loss and mourning. This is also the case with the chrysanthemums, carnations, forget-me-nots, and the classical beauty of the camellias.

An arrangement of orange lily flowers could be the perfect way to say goodbye to a joyous and warm loved one.

Yet, some people might fear that an all-orange bouquet can be a bit showy for the service. In that case, you can add a few white lilies into the mix to tone it down and reflect sympathy and purity, too.

In Chinese, the way you would say orange tiger lily sounds a whole lot like bǎinián hǎo hé, which is a wish for good luck in a relationship for a whopping 100 years!

With that in mind, it’s not hard at all to imagine that the bright flower got a reputation for being a perfect fit for weddings.

Things get even more interesting when you consider that the flower popped up in Chinese proverbs. In fact, it’s not weird to say a person who has two loaves of bread should exchange one of them for a lily.

This establishes how Chinese cultures view lilies as bringers of luck and joy. It’s generally a good thing to have in your possession.

Other people find that the spotted pattern on the petals resembles coins. So, as it turns out, orange lilies can also symbolize wealth and good luck.

Who to Give Orange Lilies to?

Orange lilies are iconic for relationship anniversaries. It also happens to be the birth flower for May. So, it’s a good option to consider if you have a loved one born in May.

It doesn’t even have to be on a certain occasion. You can just give them out to show your devotion and happiness in a relationship.

However, if you’re not so close to the person, maybe orange lilies aren’t the best way to go here. Some people might translate it as a sign of disdain, intolerance, or hidden resentment.

Of course, you won’t have to worry about this misunderstanding with long-term relationships and close friendships. They’re most likely to take it as a warm and joyous gift!

Plus, it’s not a good idea to give a bouquet of lilies to someone with an overly curious cat. Even the smallest amount of the plant can be highly toxic to felines when ingested. It might cause symptoms ranging from excessive vomiting to kidney failure!

On the other hand, you don’t have to worry if the person you’re giving the lilies to is a dog person. Pups are good to go around these flowers.

Where to Keep Orange Lilies for Yourself?

More often than not, people will be hesitant to give out orange lilies for fear that they might send the wrong message. That doesn’t mean that you can’t enjoy their charming looks, though.

You can always just keep them for yourself, either in a cutting vase or as a summer garden staple in a flower bed.

Just keep in mind that the fire lily Lilium bulbiferum variety needs a spot with partial summer shade. Ideally, you’ll want to expose the flower head to the sun but protect the rest from the heat.

If you can’t guarantee enough sunlight time in your backyard, consider leopard lilies. They need bright but indirect sunlight. You can even grow it indoors as long as it’s closer than one foot from a window.

For indoor lily flowers, you’ll have to focus on getting planters or pots with adequate drainage systems. After all, they need a hefty amount of water, and you don’t want to let the soil soak with excess moisture to mold.

The orange lily flower might not be the best gift for acquaintances, distant relatives, or coworkers. You might be unintentionally sending across the wrong message.

However, it’s a sign of devotion and vibrant playfulness, even in long-lasting relationships. So, keep it in mind for your upcoming anniversary!

If you can’t think of any May celebrations to buy a bouquet, treat your backyard to a bed of orange lilies. They’ll bloom in no time and add some warmth to your life!