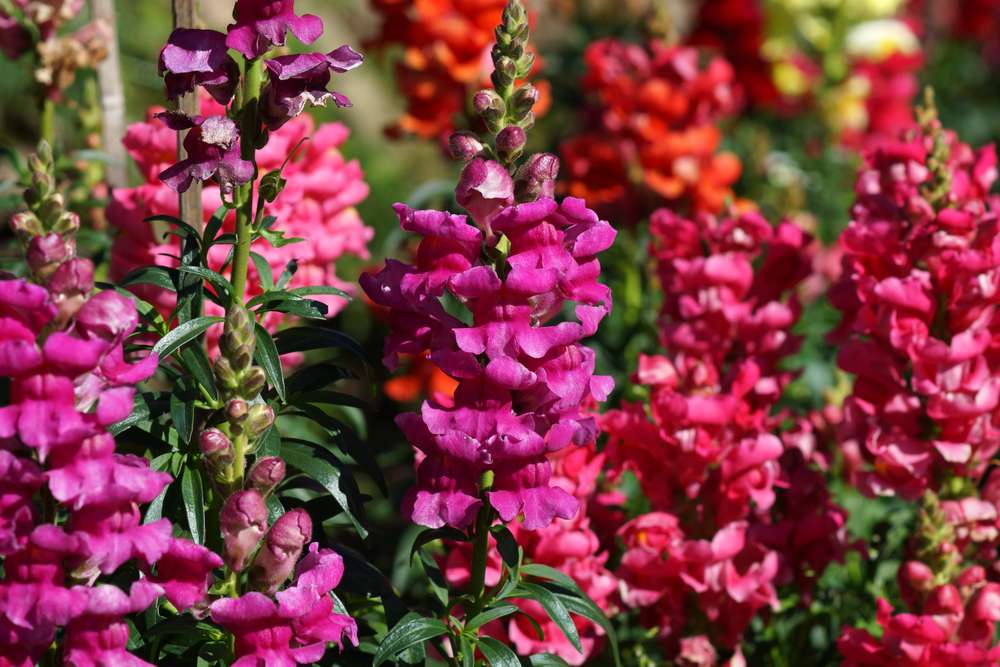 The meaning of snapdragon flowers isn’t as straightforward as for some other flowers. Indeed, unusually, these flowers hold contrasting explanations.

The snapdragon may mean beauty and grace experienced under pressure. However, it may also symbolize a certain deviousness. The flower’s double-sided symbolism has meant that it has been seen as protection against deception.

Stick around to gain a deeper understanding of the snapdragon flower and how you can use it.

The Etymology of the Snapdragon Flower

You might be wondering, “Why is it called a snapdragon?” Well, the name mainly derives from the flower’s dragon-like appearance when squeezed at the sides. It imitates the motion of a dragon opening and closing its mouth.

The snapdragon flower is also termed Antirrhinum, which is Greek-rooted. The Hellenic variation of the flower is pronounced like this, “Anti-rrhi-non.” (ἀντίρρινον)

All in all, it’s roughly interpreted as, “Like a nose.” The snapdragon flower fits this description perfectly since it has a snout-like shape.

Origin of the Snapdragon Flower

With such rich interpretations, the snapdragon has an equally rich background. The elegant flower’s origin stems from North America, Europe, and some areas in North Africa.

Nevertheless, they were most popular near the Mediterranean Sea in countries such as Italy and Spain.

Snapdragon flowers can flourish in rocky and hot regions, which has earned them their “beauty under pressure” meaning.

Having said that, snapdragon flowers can be traced back to the Roman and Greek empires. At the time, mystic powers were more revered. People believed that snapdragons had certain powers against witchcraft incantations.

This is why some Greek physicians prescribed the flower to be worn as a necklace to provide protection. Entering the medieval age, European castles were fortified with the dainty flowers since they were entrusted as guardians.

Not only were they used for security purposes, but cosmetic ones as well. It was believed that women boiled snapdragon flowers and used the essence as a sort of beauty mask to regain youth and vitality.

Since these mystic flowers were commonly used as protection, it’s no surprise that stories and tales are amassed about these gracious flowers. Some German stories encouraged people to hang snapdragon flowers over their baby’s cribs to ward off the child’s fear of evil.

In a twist of events, she stepped on a snapdragon, regained her consciousness, and fled from the wicked elf. Tales like these glorified the snout-like flowers as a defense against evil charms and hexes.

What Does the Snapdragon Flower Mean?

Everybody knows that red roses represent love and yellow ones, friendship. Unlike these simple-sense flowers, snapdragons hold a deeper meaning.

We’ve divided their meaning based on the positive and negative characteristics. Check them out below.

The good news is that there are several positive associations with the snapdragon flower. Grace is a commonly used term to describe these flowers. The trait is more synonymous with femininity since the flower is also referred to as a “Gracious Lady.”

Having said that, snapdragon flowers were sometimes held hidden to attract male attention and seem gracious.

Apart from grace, the flower can also connote pride and resilience because it stands tall despite its difficult environment. The symbolism behind these characteristics can be reflected as a gift to a loved one.

It can showcase your admiration of the recipient’s strength and how well they overcame a tough struggle in their life.

Snapdragon flowers are also used in bridal bouquets to symbolize good tidings in the future. In reference to the flower’s folkloric background, it’s also used to protect the blessed union from any evil.

Another positive trait associated with snapdragons is creativity. Due to their wide array of colors and variations, they may encourage imagination.

Luckily, snapdragon flowers don’t hold as much negative influence as positive. The downsides of the flowers are mainly described as devious.

Although one of the positive traits of snapdragon flowers is that it entices men, they can also carry an opposing message. When worn by women, they can signify uninterest in attention, which entails denial.

Another negative connotation comes in the form of deception. In ancient times, snapdragon flowers were sent by married men to their mistresses to express their love and lust.

On the other hand, during the Victorian era, snapdragons were also a symbol of forgiveness. Like hyacinths, the flowers were sent to say sorry.

Snapdragon flowers come in a range of fruitful colors such as purple, yellow, and pink. Each of these colors carries varying meanings. Here are some of them below.

White generally symbolizes innocence and purity. You can send these snapdragon flowers to anyone with these qualities. Plus, it won’t send any particular message since white is void of color.

A pretty pink snapdragon flower indicates the primary meaning of grace and elegance. The bright and beautiful pink-colored snapdragons would make ideal gifts for Mother’s Day as well as additions to a bridal bouquet.

Purple-colored snapdragon flowers usually point to spirituality which helps ward off evil spirits. The color also symbolizes royalty. These flowers can make perfect gifts for those you hold in high regards such as a co-worker or hard-working friend.

Yellow flowers are bound to brighten anyone’s day. These snapdragon flowers represent friendship, happiness, good fortune, and all-around good vibes. You can give these bright-colored flowers to any loved one, especially if they’re feeling a little down.

Red-colored flowers can send an intense and passionate message to their recipient. You can give these snapdragon flowers to a lover on Valentine’s Day or any other special occasion. That being said, you can also send them as a non-romantic gesture.

A vibrant color like orange naturally brightens anyone’s day. You can combine orange snapdragon flowers with yellow ones for a summery bouquet. These energy-filling flowers can be given as a gift to congratulate a loved one on an important achievement like graduating.

Snapdragon flowers can give you more than a pretty bouquet. The past and present have shown several uses of these symbolic flowers.

Did you know that snapdragons were cultivated for their seeds to make oil as well as provide an energy boost in Russia?

In the past, snapdragon flowers gave herbal teas to treat canker sores. The flower-infused tea relived the strained throats of opera singers.

Nowadays, the gracious flowers are used more for decorative purposes. They’d make a wonderful addition to your backyard. Fortunately, you can easily plant them.

Snapdragon flowers were even awarded the title of “Flower of the Year” in 1994 from the US National Garden Bureau.

Wrap Up On The Meaning of Snapdragon Flower

The meaning of snapdragon flowers isn’t limited to one. The flower carries ambiguity and depth. It can represent grace, innocence, and eloquence, but it can also connote deviousness and deception.

Although it carries both positive and negative meanings, snapdragons still make for great gifts to loved ones. With a variety of colors and respective symbolism, there’s a snapdragon flower for every occasion.