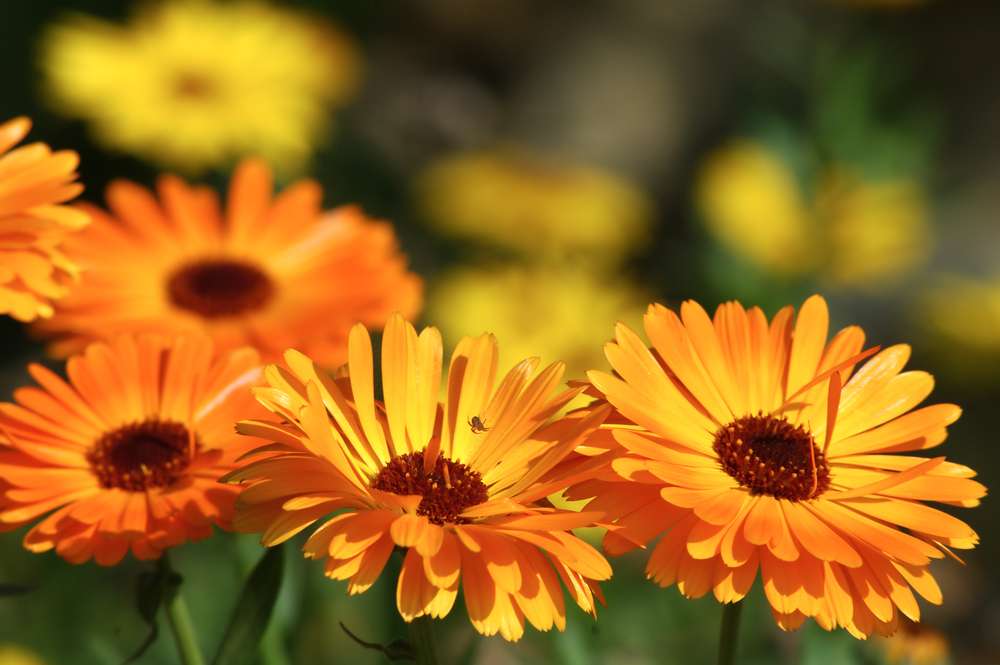 The marigold flower is one of the most popular and beloved blossoms across the globe. If you’re curious about marigold meaning, then you’ve come to the right place!

These flowers are highly valued for their medicinal properties and strong associations with spiritual and religious practices. Marigolds possess some of the brightest and most vibrant blooms among all flowering plants.

Their unique shapes and bold colors always manage to capture attention. But what do marigolds mean?

In this article, I’ll be discussing marigold meaning, history, occurrence, and care. So keep reading to learn more about these brilliant beauties.

Marigolds belong to a genus of flowering plants known as ‘Tagetes’ in the family Asteraceae. With around 50 species included, this annual herbaceous plant is native to Southern North America, particularly Mexico.

Marigold plants exist in multiple divisions and variants, each housing several cultivars. They can grow as short as 4 to 5 inches or as tall as 48 to 50 inches.

Blooms of this plant offer a wide range of vibrant colors including yellow, orange, red, white, and gold.

The most common species of marigolds are Signet, French, and African marigolds. Here’s a breakdown of each type:

Unlike the signature pom-pom shape of other marigold flowers, this particular type has small, single blooms that look like daisies. Their foliage is similar to ferns and their colors range between orange, lemon yellow, red, and tangerine.

The ‘Gem’ varieties of Signet marigolds have a mild citrusy flavor with a hint of spiciness.

This type of marigold is characterized by possessing stems with a purple hue. On top, you’ll see two flowers per head in the colors orange, mahogany, and yellow.

These lovely plants can reach a length of up to 4 feet and a width of up to 5 feet. African marigolds make great cut flowers and look fantastic along garden borders.

What Is the Meaning of Marigold Flowers?

Now that you have a better understanding of what marigold flowers are, their origins, and their characteristics, it’s time we dive into the different aspects of marigold meanings.

Marigolds bloom in a wide range of red, yellow, and orange shades. Let’s discuss the meaning behind each color:

Red in marigolds is a relatively new phenomenon since it was seen rarely until recent years. Particular varieties have been intentionally bred and cultivated to create bright red flowers and popularize the fiery color.

Like many red blooms out there, red marigolds are a symbol of love, romance, and passionate connections. They also represent desire, the will to win, pleasure, survival, and vitality.

These blooms represent new beginnings after the hardships of winter clear away. Yellow or gold marigolds are also a symbol of happiness, joy, fun, warmth, optimism, and good luck.

Around 3 to 4 centuries ago, Portuguese explorers introduced India to marigold flowers as part of their expeditions and cultural exchange efforts. From that point on, these bright and humble flowers became deeply intertwined with the religions in India as an integral part of their practices and rituals.

In Hinduism, believers offer marigold flowers to the Goddess Lakshmi and Lord Vishnu, who are linked to prosperity, wealth, and fortune. This offering stems from the representation of these gods’ chakra as a sun-like symbol and the association of marigolds with the sun.

Thanks to the relationship between marigolds and the divine couple -Lakshmi and Vishnu-, these flowers are also widely used in decorations and garlands for Hindu marriage ceremonies and festivities.

Marigold flowers also have a vital presence in Buddhism. Marigolds and lotus flowers are used as offerings to Buddha.

They’re also featured in garlands that serve to decorate altars, statues, and temples of worship.

Marigold has a strong significance in Christianity that’s heavily associated with the flower’s arrival in Europe. This happened when early Spanish explorers made their way to Mexico and then went back to their homeland with seeds for planting marigold flowers.

Once they caught on in Spain, the public was fascinated by the bright blooms. The popularity of marigolds skyrocketed throughout the country and, consequently, in France, Europe, and North Africa.

Monastery gardens were one of the most common locations for planting marigolds. With time, these beautiful flowers became widely used for adorning the Altar of the Virgin Mary.

The flower’s brilliant shades of yellow and orange along with the lovely shape of its petals encouraged the poor to offer the blooms in support of monasteries instead of gold. As such, the flowers became known as Mary’s gold, which was modified into “marigold” later on.

Marigold flowers have held a fundamental association with meanings of restoration, healing, and protection in Ancient cultures such as Ancient Greece and Ancient Egypt.

The main reason behind this is the medicinal properties of the flower which were highly valued in both civilizations. People back then used marigolds to heal wounds, treat sores, and alleviate pain.

Marigold flowers have been associated with ancient practices in Mexican culture with recorded uses dating as far back as the Aztec folk.

In fact, the first documented application of marigolds in medicine was in a book called “De la Cruz-Badiano Aztec Herbal”. It was composed by Spanish conquistadors in 1552 who wrote about Aztec herbal remedies and medicines they encountered in Mexico.

People back then used marigold flowers to make treatments for those who were struck by lightning and for hiccups.

Besides medicine, the Aztecs also believed that marigolds possess spiritual and magical powers. They used them to help people safely cross water or rivers and as decorations for their shrines and temples.

But perhaps the most famous spiritual or magical tradition involving marigolds in Aztec practices is one that still happens to this time in Mexico and throughout Latin America, known as “Dia de Los Muertos”.

This literally translates into “day of the dead”, which is a yearly event that celebrates the dead and honors their memory. People who participate use marigolds to adorn the shrines, altars, and graves of loved ones as they believe that the bright colors and fragrant scents of the flower help guide souls from their burial places to their family homes.

All of this significance explains why Aztecs too care to breed marigolds to make them naturally larger in size. It also explains the close-knit link between marigold flowers and meanings of protection, grief, remembrance, and mourning.

Floriography is the language of flowers in which different blooms and plants are associated with various meanings and symbols. This practice was around before the Victorian era, but its popularity skyrocketed in the 1800s as a favorite pastime.

Books and guides that discussed flower language were present in pretty much every household as people loved deciphering messages behind received flowers and sending their own thoughts that they couldn’t speak out loud.

As such, marigolds in Victorian floriography presented meanings of contempt, protection, and comfort. They could also be a symbol of jealousy, grief, mourning, and despair.

A sturdy plant with bright blooms of yellow, orange, and red shades, the marigold is the official flower assigned to the Leo zodiac sign. This link is based on various common traits between the flower and the Leo individuals.

For one, marigolds are typically thought of as a representation of the color and strength of the sun thanks to their colors and shape. From this point, a connection was established between marigolds and Leo individuals due to the association of both the flower and the astrological sign with the sun.

It actually checks out too, as individuals of the Leo sign are known to be strong, big-hearted, independent, confident, and skilled in communication.

When to Give Marigolds

If you’re wondering what type of occasions you can use marigolds as a gift, the following examples should help you figure it out:

Whether it’s a relative who’s been sick or a friend who’s been having a rough time, some yellow, green, or white marigolds are a great way to lift their spirit and let them know you’re thinking of them

In yellow and orange, these blooms are a symbol of good luck, wealth, success, and joy. They also convey sentiments of well-wishing and support through the new couple’s journey.

How to Care For Marigold

One of the best things about marigold plants is the low maintenance they need once properly formed. Here are some tips to help your marigolds thrive and stay healthy:

Wrap Up On Marigold Meaning

There you have it, everything you need to know about marigold meaning, history, occurrence, and care.