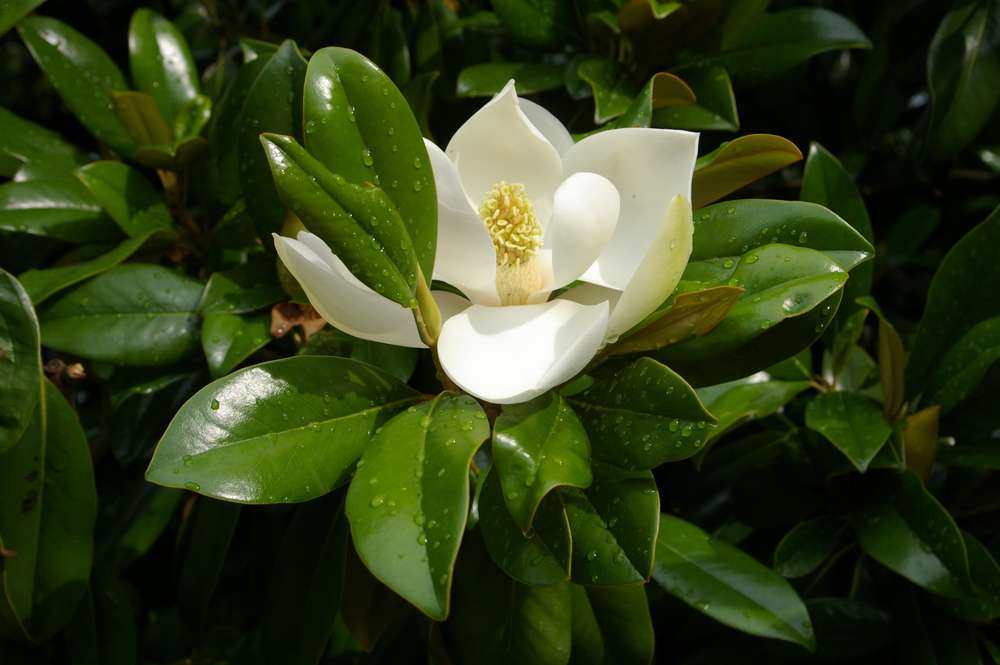 Wondering about magnolia flower meaning? Then you’ve come to the right place!

The symbolization of magnolias differs across locations, cultures, and colors, but they’re generally associated with nobility, perseverance, and dignity. They also represent purity, joy, love of nature, pride, and confidence.

In this article, I’ll be discussing magnolia flower meanings, occurrences, and characteristics. So keep reading to learn more about these beauties.

What Are Magnolia Flowers?

Magnolia plants are a genus of flowering plants that houses more than 300 species and belongs to the family Magnoliaceae. They’re perennial plants, existing as large or small trees or shrubs.

Magnolia plants produce stunning flowers that look like stars or bowls. Their colors vary from pink, purple, and white, to yellow, red, and green.

Magnolia plants can grow up to 70 to 80 feet tall and reach a width of up to 20 to 40 feet. They love sunny conditions and occur in hardiness zones 6 to 10 USA.

Magnolias can take a decade or two to achieve their full size. They bloom in early spring or even late winter and last through summer.

Magnolias are native to China, Japan, and the United States.

What Do Magnolia Flowers Mean?

Now that you have a better understanding of what magnolia blooms are and where they come from it’s time we dive into the different aspects of magnolia flower meanings.

Magnolias bloom in various colors including white, yellow, pink, purple, red, and green. Let’s discuss the meaning behind each color:

white is the color of purity and innocence, which is exactly what white magnolias blooms represent. They also symbolize hope, care, perfection, lightheartedness, faith, well wishes, genuineness, and spirituality.

White magnolias are often linked to lunar goddesses, mainly Selene or Artemis. As such, they tend to stand for gentleness and kindness.

Yellow in flowers is typically associated with strength, positive energy, and bright moods. The same goes for yellow magnolias.

Yellow magnolia blossoms represent happiness, joy, cheerfulness, and friendship. They also stand for new beginnings, in the sense that they mark the start of spring after the hardships of winter clear away.

Additionally, yellow magnolias are a symbol of warmth, fun, optimism, and good luck.

Yellow magnolias are often associated with solar goddesses such as Medusa or Sunna. As such, they’re usually linked to delight and friendly affection.

Pink magnolia blooms are a symbol of youth, femininity, tenderness, and innocence. They can also represent romance, love, and joy. Not to mention, they can add a welcoming vibe to your home.

Pink magnolia flowers are usually linked to love goddesses such as Aphrodite or Venus. As such, their soft, blushing petals are often associated with femininity, affection, and grace.

Purple is one of the most stunning colors seen on magnolia blooms. Ranging from lighter shades such as lavender to deeper shades such as violet, purple magnolias are a symbol of nobility, pride, dignity, and royalty.

Purple magnolia blossoms can also represent affection, spirituality, extravagance, class, and uniqueness. In some cases, they can even express mystery and confidence.

Purple magnolia flowers are also linked to religion and used in religious ceremonies and rituals in various cultures, so they can represent faith as well. Additionally, these flowers can stand for health and good fortune.

Magnolia “Jane” is one of the most well-known purple magnolia species. Other examples include a few Saucer magnolia varieties such as Magnolia x soulangeana ‘Lennei’.

Green in flowers is often a symbol of good luck, fortune, health, and cheer. The same goes for green magnolia blooms.

Examples of green magnolia species aren’t many. The most notable one is the cucumber tree magnolia (Magnolia acuminata).

Red in flowers translates into dramatic and deep feelings. With magnolias, it only gets more intense due to the unique shape of the flower.

Red magnolia blooms are a symbol of love, romance, and passionate relationships. They can also represent fiery desire, pleasure, and vitality.

While red magnolias aren’t as common as other colors, they do exist and there are increasing efforts to breed more red varieties. Examples of red magnolia flowers include Magnolia ‘Vulcan’, Magnolia ‘Genie’, and Magnolia liliiflora ‘Nigra’.

In the United States

It’s not often that you see a flower possessing such significance in the United States as the magnolia blossom. Its connection with the country is particularly tied to the states of the South more than the North, but it’s beloved all over anyway.

Characterized by its bright white petals and broad green leaves, the southern magnolia is the official state flower of Mississippi and Louisiana. This was declared in 1952 and 1900 respectively, with Mississippi being nicknamed ‘The Magnolia State’.

This eye-catching species can reach up to 80 feet tall and grow up to 40 feet wide. Its blooms can extend up to 1 foot in length, with an elegant vibe resulting from the plant’s low-branching profile.

Thriving in hardiness zones 6 to 10, the fragrant southern magnolia occurs naturally from North Carolina to Florida and Texas. The eastern region of Houston -the most populous city in Texas- is actually home to natural groves containing the graceful flower, which is why it’s also nicknamed the ‘Magnolia City’.

In the southern part of the United States, people widely consider magnolias a symbol of purity, beauty, and nobility. This is why these graceful flowers are commonly featured in bridal bouquets.

Japanese culture is rich in connections and associations with elements of nature, especially plants and flowers. The magnolia is one of the blossoms with a remarkable significance throughout the country.

For the people of Japan, magnolia flowers are a representation of nature’s divine beauty and their love for it — a manifestation of nature’s essence or so to speak. They also take it as a symbol of harmony and peaceful living.

The Japanese also consider magnolias to stand for perseverance, dignity, and immortality.

as herbs. All these meanings are based on the Japanese language of flowers referred to as Hanakotoba.

The folks of Japan also value magnolia plants for their medicinal benefits. They use its flowers and bark to alleviate psychological and mental disorders such as anxiety, stress, and depression, as well as treat asthma, headaches, fever, and gastrointestinal disorders.

Additionally, the Japanese rely on magnolia plants for ornamental purposes. The flower is heavily featured in various decorations and accessories.

Among the most common species of magnolia flowers in Japan are the following:

This slow-growing species gets its name from the Japanese word for fist, “kobushi”, as a tribute to the fist-like shape of the plant’s flower bud.

Featuring delicate buds that are highly sensitive to frost, this large shrub or small tree blossoms in early spring or even late winter. It’s a close relative of the Japanese magnolia and can reach a height of up to 20 feet.

Chinese culture is full of symbolism and implications associated with plants and flowers. One of these is the magnolia blossom, holding a great deal of meaning behind its delicate shape and beautiful colors.

For the people of the country, magnolia flowers represent nobility, purity, and dignity. They can also symbolize a woman’s beauty and gentle nature. Additionally, they can stand for health, wealth, prosperity, and abundance.

In traditional Chinese medicine, the magnolia flower is highly regarded for its medicinal properties. For centuries, the bark and blossoms have been used to treat fever, colds, headaches, asthma, heart diseases, and lung problems, and to alleviate symptoms of dementia. It also has beneficial effects on depression and helps reduce stress and anxiety.

Magnolias are also commonly used as ornamental flowers for decorations and accessories across the country.

Also in China, the Magnolia denudata is the official city flower of Shanghai. It’s one of the many cities in China that celebrate the arrival of spring with the stunning magnolia flower as it blossoms relatively early.

The significance of magnolia flowers dates way back to ancient times in Chinese culture. It was strictly associated with royalty that only Emperors and members of their families were allowed to grow the plant as a way to exclusively grant the Emperor health and wealth.

Nowadays, however, everyone in China can enjoy, own, and cultivate magnolia flowers. The royal and noble status of the bloom is an everlasting heritage nonetheless.

What’s more, the magnolia flower has a notable role in feng shui, an age-old Chinese practice that also goes by the name “Chinese geomancy” and aims to harmonize its practitioners with their surroundings using energy forces. It’s supposed to attract fortune, financial success, tranquility, and restful energy to your life depending on where you plant it.

Also referred to as Oyama magnolia and Korean Mountain magnolia, Siebold’s magnolia is the national flower of North Korea.

Scientifically known as Magnolia sieboldii, this lovely blossom is one of the prettiest species of magnolia, but it also carries a lot of meaning behind its gorgeous appearance.

For the North Korean nation, the magnolia flower is a perfect representation of courage, strength, and pride. It symbolized their determination to overcome times of difficulty and the country’s resilient character.

The correlation couldn’t be more fitting as Siebold’s magnolia is an extremely hardy plant that blooms at the foot of mountains after enduring ice and violent winds.

People in North Korea feature magnolia flowers in many of their ceremonies and celebrations. They value it as part of their identity and heritage.

During the Victorian era, the popularity of floriography skyrocketed as the activity evolved from being a pastime into something more influential.

Floriography is the language of flowers. It assigns different symbolisms and meanings to various blossoms and plants, allowing people to use them as means of expressing feelings and thoughts.

In the 1800s, there practically wasn’t a Victorian household that didn’t have books or guides that discussed flower language. People enjoyed interpreting the feelings behind flowers that they received and also loved sending their own concealed messages of sentiments that they communicate with words.

As such, the magnolia flower in Victorian floriography represents meanings of nobility, dignity, strength of character, and pride. It’s also a symbol of poise, confidence, and self-respect. It can also serve as a show of one’s love of nature.

Wrap Up On Magnolia Flower Meaning

There you have it, everything you need to know about magnolia flower meanings and symbolization. As you can tell by now, they vary across locations and cultures, but they’re generally associated with nobility, perseverance, dignity, pride, purity, joy, love of nature, and confidence.