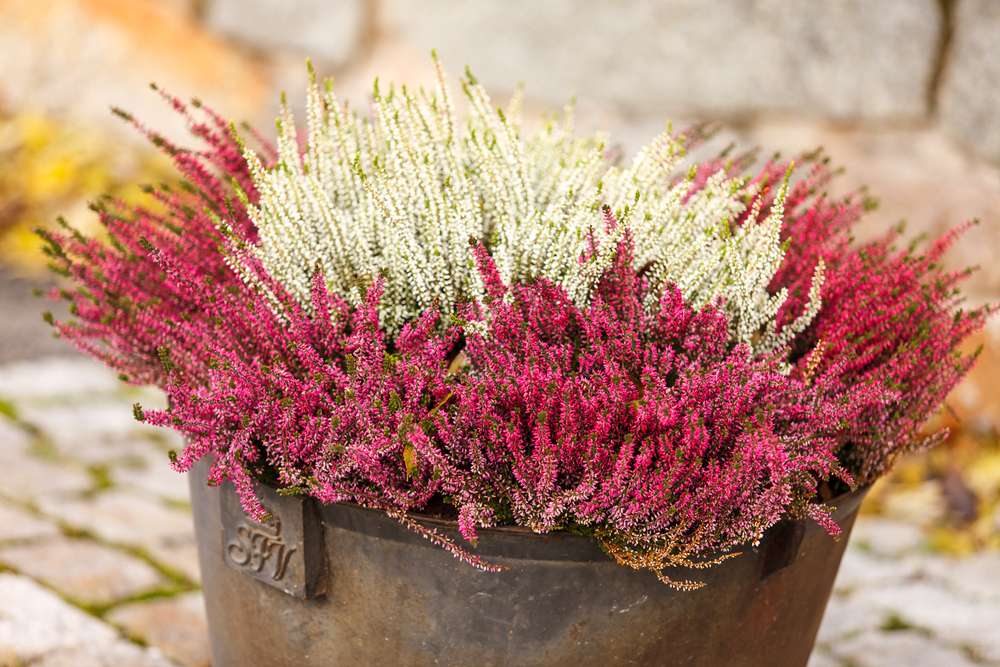 Are you curious about heather flower meaning? Then you’re on the right page!

Heather flowers often represent a wish for good luck, resilience, and overcoming hardships. However, they also have a rich cultural significance with concepts of cleansing, beauty, bravery, sacrifice, and well-being.

To get the full picture, we’ll go over the different interpretations according to color and cultural context. So, let’s jump right in!

To tackle the message behind the delicate heather, you have to first ask what color it is. After all, every variety can carry different connotations.

Although you can find room for shade variation under each color, you can still go by the general interpretation for each group.

So, let’s dig into the four main heather flower colors and the meaning they could represent!

A cut of white heather can symbolize purity and innocence, both of which are typical of white flowers. However, it mainly reflects a wish for good luck and prosperity.

Keep in mind that those beauties could be a rare find in many places. Yet, that only pushes the luck narrative even further. It’s basically like the four-leaf clover—it derives much of its value from its scarcity.

Although they can look a bit untamed in floral arrangements, they’re still a very popular choice for weddings. They say that you’re optimistic and hoping for the best!

The pink heather flower bushes are more common than white ones, and they still share the same “good luck” connotation.

But there’s a bit more to the pink varieties than just that.

As you might expect with pink flowers, this one often reflects a feminine side. A magenta heather bouquet could make a good gift between partners. It mostly says that you find someone pretty, delicate, and admirable.

All these messages and interpretations aside, they can add a touch of warmth and coziness to any backyard garden!

Purple in flower language can sometimes mean royalty or mystery. In the case of the heather plants, things often go to the side of enigmatic strength, adventure, and independence.

However, it’s important to note that most varieties are hardly a true purple. Instead, you can expect the blooms to be a soft shade of lavender or amethyst. While this turns down the intensity of the message a notch, it’s still a very charming color!

If you want a cut of something dark and mysterious, you might want to consider the velvet night bell heather variety. In the sun, they could look a bit bronzy, though.

Imagine a wild bright red bush that’s around 20 inches tall, then think about what message it might reflect. Odds are, it’ll look too much like a splotch of blood for some people’s liking.

For that reason, it might be better to go for a different color in heather bouquets and even indoor pots. That said, it has an ethereal feel and could make a really good gift for someone whose favorite color is red.

If you like the idea of having a bright red bush in your garden, you can opt for the firefly variety. It changes color from yellow in the spring to orange and then to a brick-red in the early winter. This way, you can get the best of both heather worlds!

From the naming history to the glorious details of Celtic legends, there’s a lot to uncover about the wispy heather sprigs.

So, let’s take a look at how the cultural context helped shift the heather meaning:

While this is not the first thing that necessarily pops into mind, the heather looks an awful lot like a duster. As it happens, this perspective holds some historical relevance when it comes to the plant name.

The flower’s Latin genus name, Calluna, traces back all the way to the Greek word kallunein. Kallunein can cover different meanings, from cleaning something to beautifying it.

Both notions feed into how some people associate the flowers with cleanliness and aesthetic modification.

It’s vital to note that not all heather cultivars actually fall under the Calluna genus. Some of them are classified under the Erica genus.

The Erica is properly called the heath flower, not the heather. Yet, both terms are used interchangeably in a lot of cases, so you don’t have to worry too much about that.

Perhaps one of the most common legends about the heather flower is covered in Robert Louis Stevenson’s poem, the Heather Ale.

For context, the heather flower nectar and blooms were used for flavoring ale beverages. This was most common among the Picts in Scotland.

The poem tells the story of how an army defeated the Picts and threatened their king just to get their hands on the recipe. Of course, the king’s pride and secrecy forced him to sacrifice his own son just to protect his heather-based legacy.

It’s not a very cheery tale, but it still made for a beautiful poem that reflects how the flower (and its product) was seen as a great thing worthy of protection!

Continuing on the Celtic heritage of the heather flower, we have to move on to one of the Highland clans, the Dòmhnaill or the Clan MacDonald.

Much like other clans at the time, the Clan MacDonald had a plant emblem to use as a badge. That plant was no other than the gorgeous heather flower.

However, they preferred the purple-pink varieties over the white ones. Sometimes, they would wear the sprigs on their bonnets or caps.

From this, you can see how the flower would represent even more than good luck. It was a sign of bravery, collective strength, belonging, and protection.

Heather flowers carry a very subtle but very pleasant scent. It’s earthy and has an atmosphere of warmth and familiarity. The only issue is that the aroma fades away quickly when the plant dries,

Throughout history, one way to revive the smell of heathers was by preparing tea—well, a herbal alternative to regular tea leaves, anyway.

This is what we now know as the Wild Moorland tea, and it usually has a blackcurrant berry flavor to complement the heather. Not only does it taste great, but it also provides the anti-inflammatory and antioxidant effects of heathers.

From here stems the whole notion of the heather flower as a nutritious delicacy. Maybe that even explains the sacrifice in the Heather Ale legend!

If you’re intrigued, you can try to fix yourself a cup at home. It’s not all that hard once you get your hand on some dried heather tops.

How to Make the Most Out of Heather Flowers

Now that you know what message to expect, you can use the heather flower as a:

Since it reflects good luck and resilience, you can hand it out to a friend who’s going through some hardships. It says that you wish them the best and believe in their ability to overcome this.

Bouquet for an Important Celebration

Heather flowers don’t always need a challenging time to shine. A classic white bridal bouquet or a pink arrangement are also great ways to celebrate a wedding or an anniversary.

You don’t have to wait for a special occasion to enjoy the pretty looks of the heather sprigs, especially not when you use them as cover flower beds in your backyard.

Just be aware that heathers can be highly invasive.

The heather flower meaning analysis takes us to concepts of luck, wishes, and resilience. Because of its name and shape, it also reflects cleanliness and beautification.

On top of that, it comes with a rich symbolization of bravery, pride, and protection.

So, find out the best way to use a bit of heather in your life and enjoy the positive vibes!