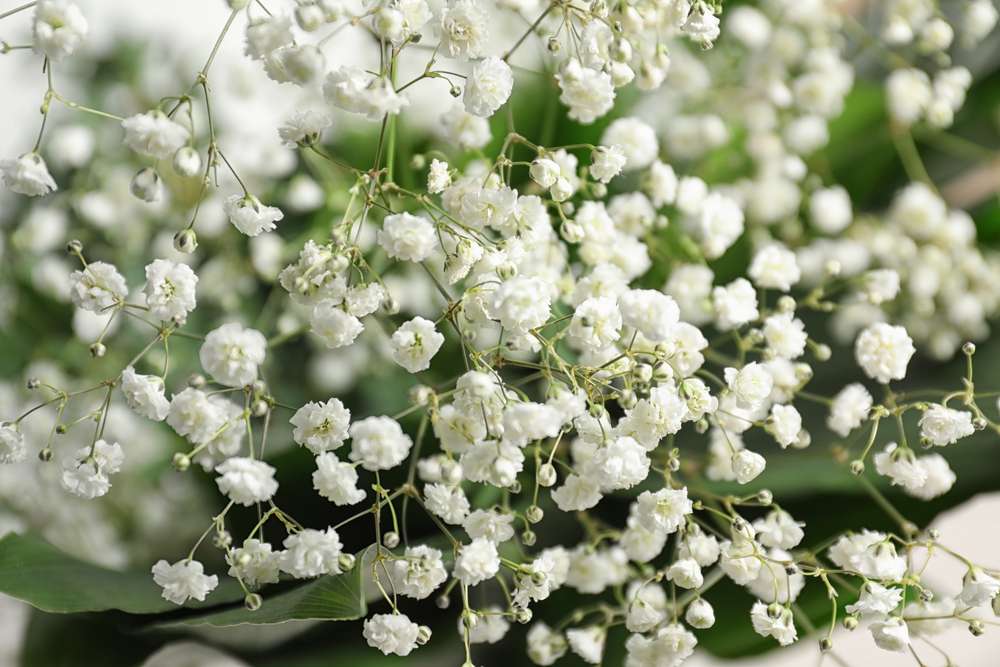 Gypsophila is a popular flower worldwide, known by the name Baby Breath. It’s known for being a filler flower in bouquets and other flower arrangements. It’s also known for being a plant that holds different meanings and symbols. So, what is Gypsophila’s meaning?

Gypsophila meaning and symbolism tend to be associated mainly with the flower’s delicate, lacy appearance and elegant colors. It’s associated with weddings and baby showers because it symbolizes innocence, purity, love, and admiration. It also symbolizes femininity and elegance.

In today’s article, we’ll discuss in detail all the possible meanings and symbolism that are associated with gypsophila. Let’s get started!

Gypsophila, or Baby Breath, belongs to the Caryophyllaceae family of the Gypsophila genus. There are about 150 different gypsophila species around the world.

The name Gypsophila is derived from two Greek words gypsos and philos. The first means gypsum and the latter means love.

This is actually a perfectly-fitted name for the plant. Gypsum is calcium sulfate, which is a mineral that is found naturally in soil, and Gypsophila plants love gypsum-rich soils.

The plant is well-known for its clusters of small blooms that sit on top of tall, thin stems. This gives the plant a lovely, delicate, and airy appearance that people adore.

Gypsophila can grow to about an average of four feet tall and wide, which makes it perfect as an edging plant. White and pink are the natural colors of the plant. However, many florists dye it in different colors to suit everyone’s liking.

Even though the plant isn’t native to the United States, it’s fairly easy to grow and care for. Besides, gypsophila has naturalized its growth in the northern and eastern parts of the country. It’s even considered an invasive plant in some areas.

The plant thrives in hardiness zones 4 through 9. It can be grown as a perennial or an annual depending on the area. Gypsophila paniculata is the most common type grown by many gardeners and plant lovers around the world.

It’s believed that the origin of gypsophila dates back to the 18th century when Johann Amman, a Swiss-Russian botanist, sent specimens to Carl Linnaeus, another botanist of that time.

Gypsophila is native to Northern Africa, Asia, and Europe. The plant was among the favorite plants of Victorian gardeners in Great Britain.

Some of these plants made their way to the United States in 1828, including Gypsophila. The plant quickly became one of the favorites for gardeners and garden writers.

Gypsophila’s nickname is Baby Breath, which didn’t show up until it was introduced in the dictionary around the year 1885.

The history of how the plant got this nickname is unknown. What is important is that the name totally fits the plant.

Here are the most common meanings that are attributed to gypsophila flowers:

It’s thought that gypsophila was among the flowers used in floriography, the language of flowers, in the Victorian era. It was used to symbolize innocence and purity because of its white delicate blooms.

This symbolization stuck with the beautiful flower in modern floriography. That’s why it’s often associated with baby showers and giving birth.

White Baby Breath bouquets can make beautiful gifts for mommas that just delivered a baby. It can also be a pairing gift for a baby shower.

While white gypsophila flowers are what is usually used on these occasions, you can also use pink and blue referring to the baby’s gender.

Ture love is another Victorian symbolization of Baby Breath flowers. If you think about it, you’ll notice that it makes sense.

The flower can thrive in a wide range of difficult environments, just like true, everlasting love. This is why you can see it used in wedding decorations and bridal bouquets.

It also makes a great gift for lovers on Valentine’s Day. White, pink, and red gypsophila best suit this case.

Because of the flower’s delicate, small blooms and their lacy appearance, it symbolizes femininity and elegance. Again, this is an old symbolization from the Victorian era that stuck with the flower.

Baby Breath or gypsophila isn’t associated with a specific culture or religion. However, it’s used for different purposes among different cultures.

For example, gypsophila is famous and loved by many people in China. Both natural and fake colors have a big market there, except for white gypsophila.

White gypsophila is often associated with funeral arrangements in China. That’s why the white color doesn’t have a big market like the others.

On the other hand, white gypsophila is often used as wedding decorations for Christian weddings.

Uses of Gypsophila Throughout Time

Gypsophila isn’t only a beautiful plant, it’s essential in many industries all over the world. Some of its uses date back to old times like the Victorian era, and others are new achievements by modern researchers.

Gypsophila, or Baby Breath, flowers have been used as fillers in flower arrangements and bouquets since the Victorian era.

Now, the flower is receiving more recognition as being the centerpiece of many flower arrangements. This seems to be especially popular in China.

People there like to have a complete flower bouquet containing only Gypsophila flowers.

The best thing about Gypsophila is that it can last several days as a cut flower. So, you’ll have time to enjoy its beauty in a bouquet or vase.

The flower has also been used in gardening since the Victorian era. It can be used as an edging plant, in flower beds, and even in containers.

Gypsophila is one of the plants that contain good amounts of saponins. These chemicals are what form the soap-like foam when used with water.

That’s why it was used for washing silk and wool back in time. Now, the plant is used for making soaps and shampoos.

Saponins aren’t the only reason why the plant is used in the cosmetics industry. Baby Breath fragrance oil can be used for its subtle scent in making soaps.

Saponins found in Gypsophila’s flowers have several health benefits. Studies have shown that saponins positively affect your immune system with their antimicrobial and antioxidant properties.

In addition, saponins help regulate cholesterol levels and body lipids, promoting better cardiovascular health. They also can be used as an antidote for serious lead poisoning and to protect against dental caries.

Lastly, the saponins in Baby Breath have hypoglycemic effects that help in regulating blood sugar levels and insulin levels in the blood.

Gypsophila has a big role in the food industry, especially in Turkey. The plant is highly used in making halva, a type of Arabic confectionery dish.

The plant is also used in making herbal cheese, liqueur, ice cream, and other types of food.

As for beverages, the plant is used in making carbonated beverages. The reason for that, you guessed it right, is the saponins found in the plant.

The plant’s saponins are proven to be effective natural pesticides. Saponins have the ability to penetrate the inside of the intestine of the insect leading to its death.

Does This Mean That We Can Eat Gypsophila Flowers?

Absolutely not. The entire gypsophila plant is toxic for both humans and animals.

Yes, gypsophila is used in so many industries including pharmaceuticals and food, but manufacturers of these industries spend adequate time on formulating their products to make them safe for consumption and other uses.

Consuming a small amount of gypsophila won’t cause serious problems, but diarrhea and vomiting might occur.

The same thing goes for pets. It’s advisable to contact your vet in case of any extreme symptoms. But don’t worry, it’s usually a mild toxicity problem that can be treated easily.

Gypsophila sap can cause skin irritation too. Besides, its dried blooms can also irritate the eyes and nose. If you have sinuses and asthma problems, you should be careful around the plant.

Gypsophila is a beautiful plant that the world can’t get enough of its beauty and constant giving to different industries.

While the plant might be known by some people as a filler plant, many think of this plant as a symbol of true love, passion, innocence, purity, femininity, and elegance.