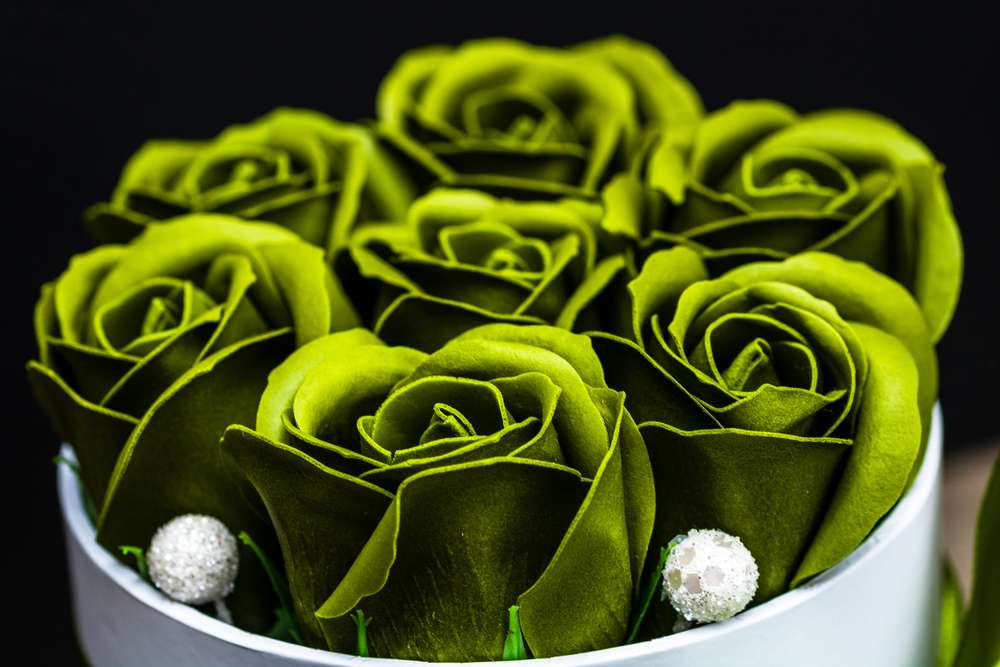 The green rose is a definite conversation piece because it lacks actual petals. However, this genetic anomaly seems to make green roses stand out among their punchier colored rose counterparts.

Unsurprisingly, different rose colours symbolize different things. As with all other flowers, by understanding green roses meaning and symbolism, you can add multiple layers of emotion to your flower arrangements and let them do all the talking for you.

In the world of roses, the bright and cheerful green color is that of nature and fertility. In color psychology, green is known to invoke harmony, vitality, and a sense of freshness into any space.

Best of all, green roses represent renewal in life and spirit, as well as richness and rejuvenation. As a result, they’re often used to symbolize new beginnings and hope for what’s coming ahead.

When you include green roses in a flower arrangement, you’re saying a pretty powerful message, mainly to look for the good things in life and stay optimistic.

With their intense colors, these vivid blooms bring feelings of positivity, inner peace, and stability to mind.

The not-so-common minty green roses can also be saying that creating balance and order in your life is crucial to being happy and content. So, it makes sense that weddings, engagements, and vow renewals are also the perfect occasion for decorating the venue with green roses.

They also make a terrific addition to the colorful bouquet you’re sending your friends who just became new parents. Even if it’s their second or third child, green roses will make them feel calm, hopeful, and ready to embark on their new journey.

Another ideal time to add some green roses is when someone gets a promotion, graduates, or moves to a new place. They evoke a sense of prosperity, fortune, and good luck.

These are all critical milestones on our professional and personal track, and having some green roses seems like the best way to celebrate these happy moments in our lives.

Also, very fitting for the color green is that these roses symbolize good fortune and success. So, they’re a suitable option for someone about to launch into a new business venture or an innovative idea.

The best thing about green roses is that they strike the perfect balance between sociability and affection. You can offer them to a loved one just the same as you’d give them to a colleague at work.

The message behind the flower arrangement might be different, but they’re still well-received and loved by all.

The green rose is among the oldest and rarest of all rose colors.

According to the curator of the Peggy Rockefeller Rose Garden in New York, green roses played a significant role in the abolitionist movement. It’s believed that in the 19th century, Quaker families would plant green roses in their front yards as a way of letting others know they were conductors of the Underground Railroad.

Thus, green roses became a symbol of trust and empathy.

So, how did green roses come about in the first place? Well, these serene-looking flower species are actually a mutated version of the original pink rose, known as the ‘Old Blush’ rose.

Having been cultivated in China for centuries, Old Blush rose first appeared in the US during the late 18th century.

Years later, when botanists started cultivating Old Blush roses in the US, a series of genetic switches began to take place. During a normal growth period, the plant produces the green flaps that cover the bud known as sepals.

Next, come the petals. In today’s modern, genetically engineered world, roses can have as many as 20 or even 40 petals to each flower, which is a far cry from their predecessors that grew in the wild and only had as few as four or five petals.

The petals are followed by the plant’s reproductive parts. The male reproductive organs are called the stamens, whereas the female parts are the pistils and carpels.

However, what happened with the green rose is that the plant didn’t get past the sepal-making stage. So, these sepals become the plant’s petals, so to speak.

Then, because the green rose didn’t go on to produce sexual parts, it’s, in effect, sterile. It doesn’t produce pollen and is incapable of reproducing on its own.

In other words, the only way to reproduce this rich-colored flower is by cutting off pieces of the stem and replanting them to produce new clones of the original plant.

Grafting is another means of reproducing green roses. This is where farmers, gardeners, or botanists add living tissue from one rose plant to another to create a new, viable plant.

Since plants are genetically coded to team up with similar species, the two parts will then form an alliance. Then, after some time, they stop being two separate entities and merge into one new green rose plant.

Case in point, green roses are a genetic variation. They came about as a mistake during cell division but, somehow, managed to create a unique flower with a distinctive look that has been dazzling people for years.

The botanical name of green roses is Rosa chinensis viridiflora. They typically grow to a height of 2–5 feet and will bloom in spring, lasting until early fall.

Green roses prefer being in the shade. So, setting them somewhere that gets only partial sunlight would make them extremely happy.

The green rose is a hardy plant that requires minimal care and maintenance. It’s mainly resistant to diseases. Yet, on rare occasions, it can get infected with a form of powdery mildew and has to be sprayed with an insecticide.

Besides their unique color, green roses are also famous for their sweet and spicy fragrance. Yet, their scent is weaker than your typical rose and doesn’t carry far.

In the floral world, it’s often believed that no arrangement is perfect unless it has splashes of prominent green color among the bright-colored flowers. If that’s the case, then what would be better than adding some green roses with their sepal-petals amid some vivid florals?

Green roses are also great as decorations for Christmas and St. Patrick’s Day. They’re also a suitable choice for Easter as well as other occasions where you’re looking to bring in an air of lively freshness into your home.

Florists often pair green roses with spider mums. While spider mums look great in all colors, finding a shade similar to the green rose creates a sense of balance and stability.

Calla lilies are also another favorite choice. Whether in a vase, bouquet, or a large floral arrangement, these two blooms are sure to impress!

Also, placing several deep purple statice flowers can greatly complement the green shade. They work off each other and serve to enhance their colors.

Last, but certainly not least, many love the way green roses look against the backdrop of a bunch of velvety white gypsophila flowers.

Wrap Up On Green Roses Meaning

Being well versed in the many green rose meanings makes you more fluent in the language of flowers. You have a better understanding of what types of flowers work better together, as well as which shades say what.

Accordingly, you can communicate almost any message just by knowing which colors to put together and which to stay away from!

Whether you’re keeping them for yourself or giving them to someone on a special occasion, green roses add beauty and a sense of calm to any space.