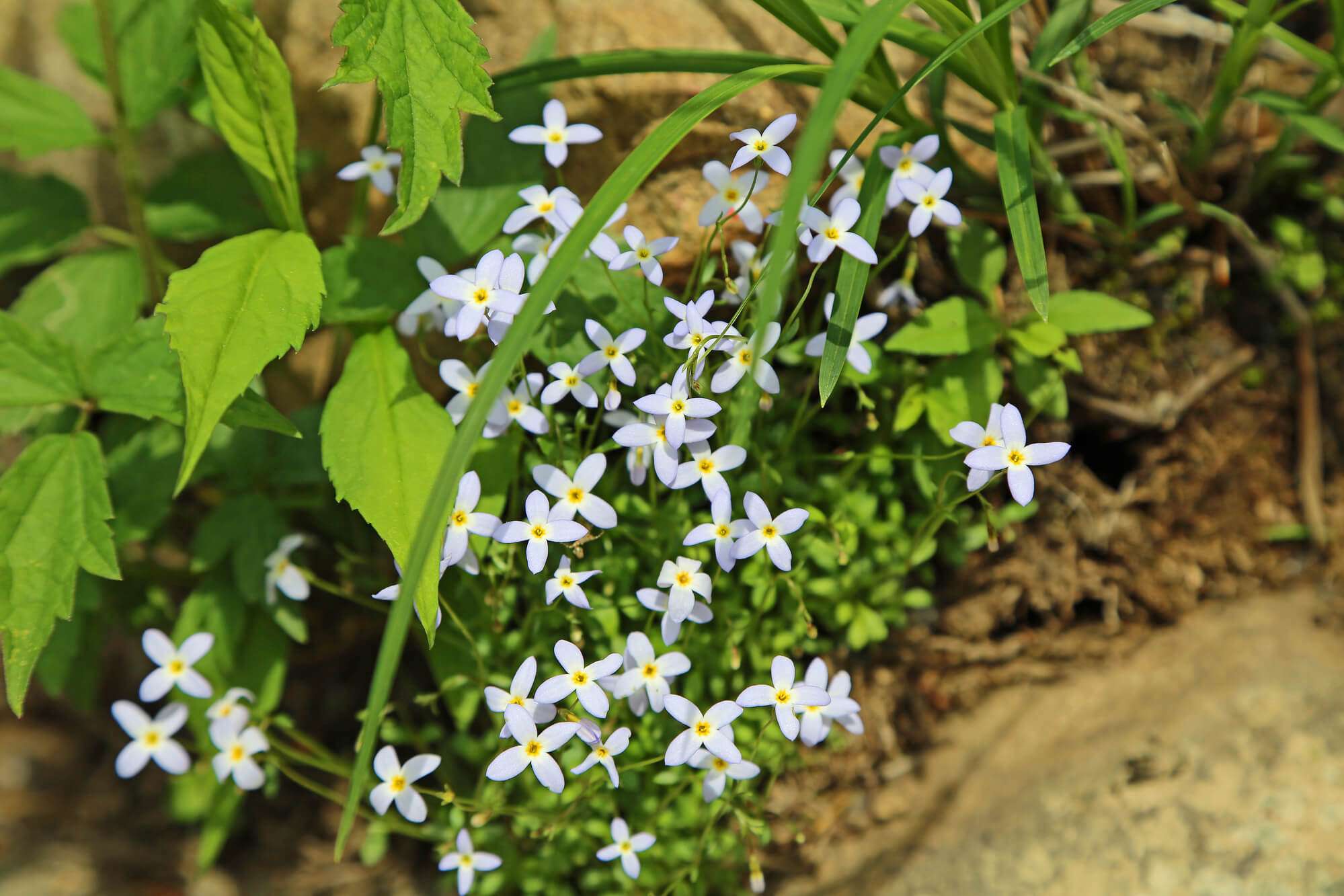 This is a tough one – what are the flowers that start with Q? While they may not roll off the tongue right away, there are approximately 11 flowers that begin with the letter Q, nine of which begin with the word “queen,” implying majesty and elegance.

In this article, I’ll provide you with brief overviews and interesting facts about 11 striking flowers that start with Q to spark your interest and, perhaps, add to your garden, so be sure to stick around!

These evergreen perennials produce tiny pale blue flowers with yellow centers. The flowers grow in clusters at the tips of the stems and bloom from spring to early summer.

Quaker Ladies are one of the most well-known flowers for attracting a ton of pollinators, including small butterflies, Little Carpenter bees, Green Metallic bees, and Meadow Fritillary butterflies.

If you ever decide to build a rock garden, Quaker Ladies are a great flowering choice. Not only will they thrive in such conditions, but their pale blue color will also add tranquility to your garden.

Quamash, also known as Camas or Camassia, is a genus of perennial bulbs in the Lily family native to the western United States. Native Americans gathered and used this plant for medicinal and food purposes, earning it the names “Camas” or “Quamash,” meaning “sweet.”

Their flowers usually bloom from spring to summer and have a magical fairy-like appearance. They’re a striking star shape with six blue, purple, or white petals with long yellow stamens in the center.

Quamash isn’t fussy about soil pH, but it does prefer moist, well-drained soil. It can grow in either full or partial sun, so you can use it to make a beautiful flower bed or to add color to your indoor space.

It’s worth mentioning that Quamash plants are often confused with Death Camas, a similar plant with highly poisonous bulbs that grow in the same habitat.

Daucus carota is a summer biennial wildflower in the carrot family. In North America, these flowers are known as Queen Anne’s Lace after Anne, Queen of Great Britain, and her great grandmother, Anne of Denmark.

Regardless of its name, Queen Anne’s Lace produces a flattened lacy cluster of tiny white blooms that can add elegance to any space.

Unfortunately, Queen Anne’s Lace can be invasive from its second year of growth. That’s why many garden owners recommend against it.

Queen of Orchids, more commonly known as Cattleya, is a genus of epiphyte orchids that are native to tropical America where they thrive in warm, humid environments.

Queen of Orchid flowers are showy and the epitome of floral beauty. They’re probably what you think of when you hear the word “orchid.”

The petals are vivid purple, pink, white, yellow, red, and blue. They’re also fragrant and look pretty in any setting, making them ideal for indoor spaces.

It belongs to a group of orchids called the Sun Orchids in the Orchid family because their flowers only open on warm, sunny days. That said, Sheba is unlike any other species, which is why it’s often referred to as the Orchid family’s Holy Grail.

The rarity of Queen of Sheba isn’t the only reason the plant is so highly regarded. The flowers are simply otherworldly, from their appearance to their colors.

When Queen of Sheba flowers open, the petals are vibrant purple, blue, or pink with darker spots. Some cultivars have reddish edges and yellow margins. A few bright yellow sepals adorn the center.

6.  Queen of the Prairie

A member of the Rose family, this North American native is sturdy and can tolerate a variety of soil conditions as long as the soil is well-draining. In fact, Queen of the Prairie thrives best when it’s left undisturbed, so you don’t have to constantly tend to it.

Just plant it in a location that receives full to partial sun and then forget about it.

While it can take up to four years for a Queen’s Cup to flower, the plant can live for more than thirty years. So, you’ll have plenty of time to see it bloom multiple times.

Queen’s Tears is a uniquely-colored epiphytic tropical plant native to Brazil, Argentina, and Uruguay that belongs to the Bromeliad family.

It grows in clumps of upright trumpet-shaped grayish-green leaves and pink bracts. These flamboyant bracts carry lime-green petals with royal blue rims and long yellow stamens protruding from the center.

The name isn’t connected in any way to tears or royal tears. Instead, it comes from the sticky, clear nectar produced by the plant’s blooms, which forms visible droplets resembling tears. These tear-like droplets and the flowers’ royal purple color together make up Queen’s Tears.

Because Queen’s Tears is epiphytic, you should grow it in a pot alongside another plant. This allows the queen to absorb moisture and nutrients from neighboring plants while maintaining shallow roots.

In their natural habitat, Queen’s Wreaths are fast-growing plants that can reach heights of 25–40 inches. While they’ll grow just as quickly in cultivation, this vine is frequently pruned to a more manageable size.

Queen Wreaths thrive in environments similar to their natural habitat. They’re not too high-maintenance, but they require full sun, regular watering, and moist, fertile, well-draining soils.

In return, these purple vines are extremely drought and wind-resistant. They’re also moderately salt-tolerant, making them an excellent addition to coastal landscapes.

Quesnelia is a flowering plant genus with about 20 species that belong to the Bromeliaceae family and is widely grown in eastern and southeastern Brazil.

This plant produces unusual cone-shaped flowers that are nestled among stiff, blade-shaped leaf rosettes. The flowers are red, blue, pink, or yellow—sometimes multicolored—and bloom mostly in the winter.

Once established, Quesnelias are easy to grow and require very little maintenance. They thrive in moist but well-draining soil and anywhere from full sun to full shade. They’re also drought- and cold-tolerant in zones 9–12.

The Quince, scientifically known as Chaenomeles speciosa, is a genus of three flowering plant species in the Rosaceae (Rose) family native to eastern Asia.

Quince flowers can last up to 14 days and are followed by apple-like fruit, which is commonly used in jams and jellies.

Like a Quesnelia, the best part about growing a flowering Quince is how incredibly low-maintenance it is.

All you need to do is plant your Quince in a location that receives sunlight and has well-draining soil.

Final Thoughts On Flowers That Start With Q

Given the fact that very few flowers start with the letter Q, it’s totally normal if you’ve never come across any in your lifetime.

If this article is your first introduction to flowers that start with Q, I hope you’ve found it informative and useful.

Better yet, I hope you’ve been able to find one or two of the 11 queenly flowers interesting enough to consider planting in your garden!