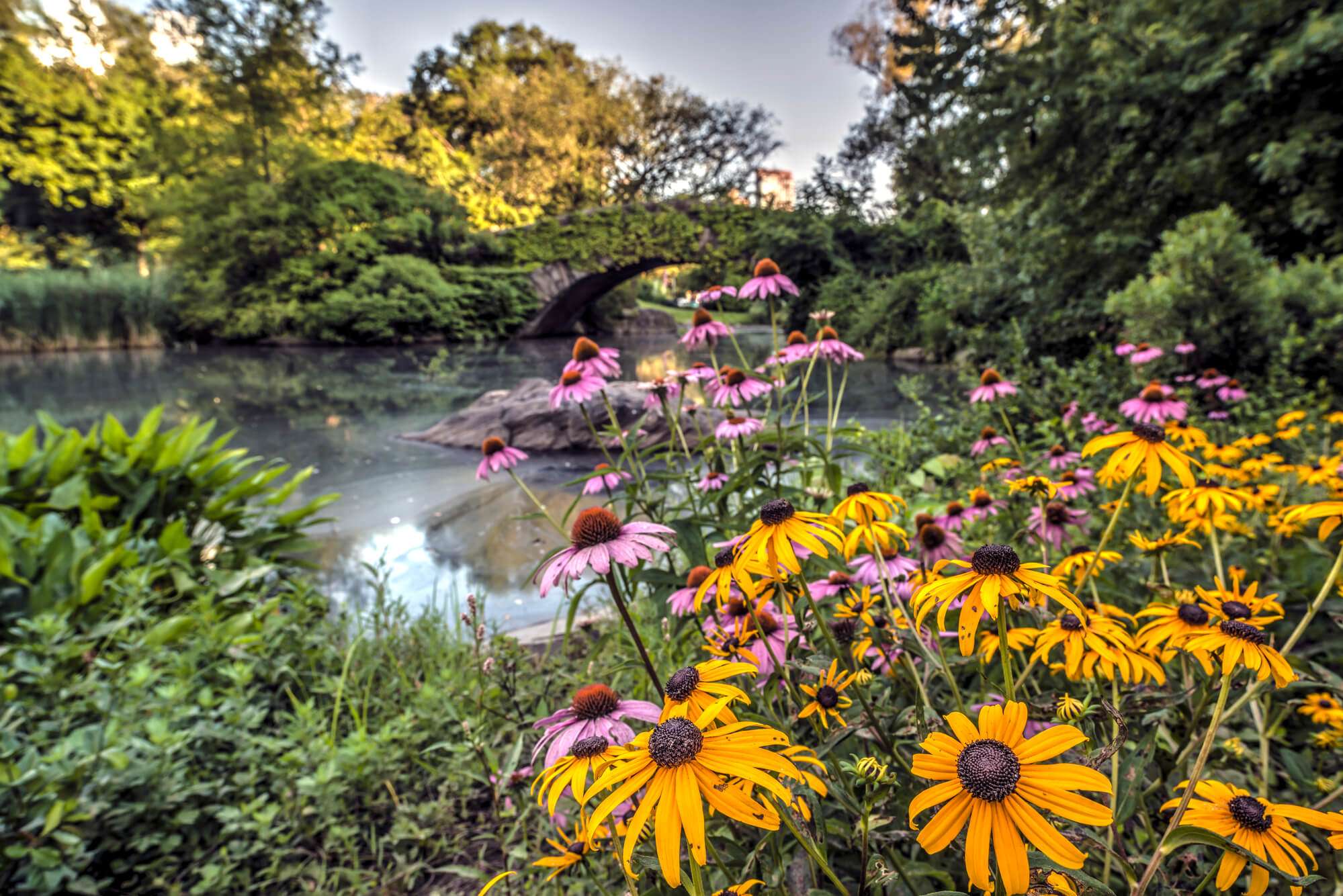 Interested in flowers that start with C? Then you’ve come to the right place! Whether you’re trying to boost your flower knowledge, looking for inspiration, or just curious, this article is for you.

If you want to learn more about these flowers, keep reading as we discuss features and facts regarding each plant.

The calla lily is one of the most popular flowers worldwide. It’s used in a wide variety of occasions and events from weddings to funerals. It’s also known as the Arum Lily and exists in about 8 varieties.

These showy flowers possess a unique funnel-shaped spathe with a protruding spadix. If any part of the plant is ingested, it can be very toxic or even fatal to humans and animals, so stick to admiring the view!

Calluna vulgaris is the only species in this genus, commonly known as Heather. Native to North Africa, Europe, and some parts of Asia, this evergreen shrub produces hundreds of bell-shaped blooms that effectively attract bees, butterflies, and other beneficial insects.

Heather flowers are often planted and confused with Erica flowers, which are a different genus.

Originating from eastern Asia (Japan, Korea, and China), this genus of slow growers includes over 250 species. They produce flowers with lush petals that last for a long time.

Camellias are a symbol of passion and desire. They’re widely used in making tea with a key role in alleviating stress and anxiety and boosting immunity.

Named after their brilliant bell-shaped flowers, the Campanula genus includes between 400 and 500 species. Also known as Bellflowers, these plants are mainly used as garden ornamentals, but they’re also nutritious as food.

These beauties are associated with many legends such as the one involving the Roman Goddess of love and beauty, Venus.

Also known as Van Staden’s river daisy, African Daisy, and Star of the Veldt, these flowers are a huge hit on the commercial side thanks to their broad outline, long blooming time, and extensive color range of their hybrids.

Native to Africa, Cape Marguerite daisies are a symbol of innocence and purity. They’re sun-loving plants that can grow up to 2 feet high.

With more than 200 species in the Nepeta genus, it’s native to Africa, Asia, and Europe. They possess scented leaves and produce clusters of small flowers.

Besides Catnip, it’s also known as Catnip, Cataria, and Catwort – all of which reflect the plants’ compelling effect in attracting cats. This is due to the plants’ volatile oil that contains nepetalactone.

Also known as Bachelor’s Button, Basket Flower, and Cornflower, this flower is among the 500 variants of the Centaurea genus. It displays an upright, hairy stem with a flower head at the tip of each one.

The flowers possess ray florets surrounding central disk florets. They’re a symbol of unity and prosperity, which explains why Estonia chose them as their national flower.

Also known as Snakes Head and Crown Imperial, Checkered Lily refers to over 100 species of flowering plants in the Fritillaria genus. The showy blooms possess the classic bell shape of lilies, but with checkered pigmentation patterns.

A symbol of majesty and power, Checkered Lilies look great as cut flowers as well as in garden beds, borders, rock gardens, cottage gardens, and pots.

Also known as Balloon Flower and Japanese Bellflower, the Chinese Bellflower is native to East Asia. It’s the only member of the Platycodon genus, derived from the Greek word for bell, “kodon”.

It’s called Balloon Flower because the buds look like balloons before they bloom into star-shaped flowers with 5 pointed petals.

Also known as Mum, Garden Mum, and Hardy Mum, the Chrysanthemum genus includes around 50 species. These flowering plants produce single or double blooms on each stem, with a dense daisy-like appearance to its petals and center.

Native to Asia and Europe, Chrysanthemum is Japan’s official flower and Australia’s official Mother’s Day flower. Not only is it a long-lasting cut flower, but it also looks fantastic in garden beds and pots.

Also known as Rock Rose, the Cistus genus has around 50 members and is native to the Mediterranean area. These flowering plants produce bowl-shaped blooms with 5 smooth petals.

Cistus flowers are delicate with a short life, but the plant itself is extremely tolerant and is suitable for growth in dry conditions. As such, they’re a symbol of endurance and determination.

Named as a tribute to William Clark of the Lewis and Clark Expedition, the Clarkia genus includes about 40 members. It’s also called Godetia after Charles Henri Godet, a Swiss botanist.

Easy to grow and maintain, Clarkias produce cup-shaped flowers with 4 petals and 4 sepals attached to the bloom’s tubular base.

Clematis are easy to maintain but they can be quite toxic to humans and pets.

Also called Glorybower and Bag Flower, the Clerodendrum genus includes more than 300 members. These flowering plants originate from tropical and subtropical regions of the globe.

They come in various shapes and sizes but their flowers are always brightly-colored, representing success and good fortune. Also, they bloom in clusters, so they look attractive planted in borders and beds.

Belonging to the Ranunculaceae family, the Aquilegia genus includes between 60 and 70 species of flowers. Generally, they represent strength and wisdom.

Originating from North America, these flowers owe their unique shape to possessing 5 rounded petals sitting alternatively on top of 5 pointed sepals with spurs radiating from the base.

The Rudbeckia genus includes more than 20 species. These flowering plants are also known as Black-Eyed Susan thanks to their typically dark central cones.

Coneflowers of this genus feature a daisy-like appearance with bright and thin petals. Originating from North America, these flowers are a symbol of motivation.

That’s right, there’s another flower known as Coneflower. This one belongs to the Echinacea genus and comes in 10 variants or so.

Echinacea produces blooms similar to daisies with petal-like ray florets and a central cone-shaped disc. A symbol of health and strength, these flowers are highly resistant to heat and drought, so they’re easy to care for.

Also known as Lily of the Valley, this genus is composed of only 3 species: Convallaria keiskei, Convallaria montana, and Convallaria majalis. They produce perfectly bell-shaped flowers with 6 fused petals.

Convallaria blooms are very fragrant and are used in making perfumes. A symbol of happiness and purity, these flowers were featured in the bridal bouquet of Duchess Kate Middleton at her royal wedding to Prince William.

The Crane Flower is gaining popularity in the commercial sector as they add an attractive tropical touch to arrangements and bouquets. It’s also the official flower of Los Angeles, California.

Strelitzia flowers represent joy, freedom, and immortality. Although they’re mainly ornamental, they’ve been used in traditional medicine as an antibacterial.

Last but not least, the Cyclamen genus includes around 25 species of flowering plants. Also known as Sowbread, they produce unique flowers with 5 erect petals.

They’re a symbol of tenderness and unconditional love.

Wrap Up On Flowers That Start With C

As you can tell by now, there are many stunning flowers that start with C. Each one has a unique aspect to offer, so you’re bound to find a flower that suits your needs.