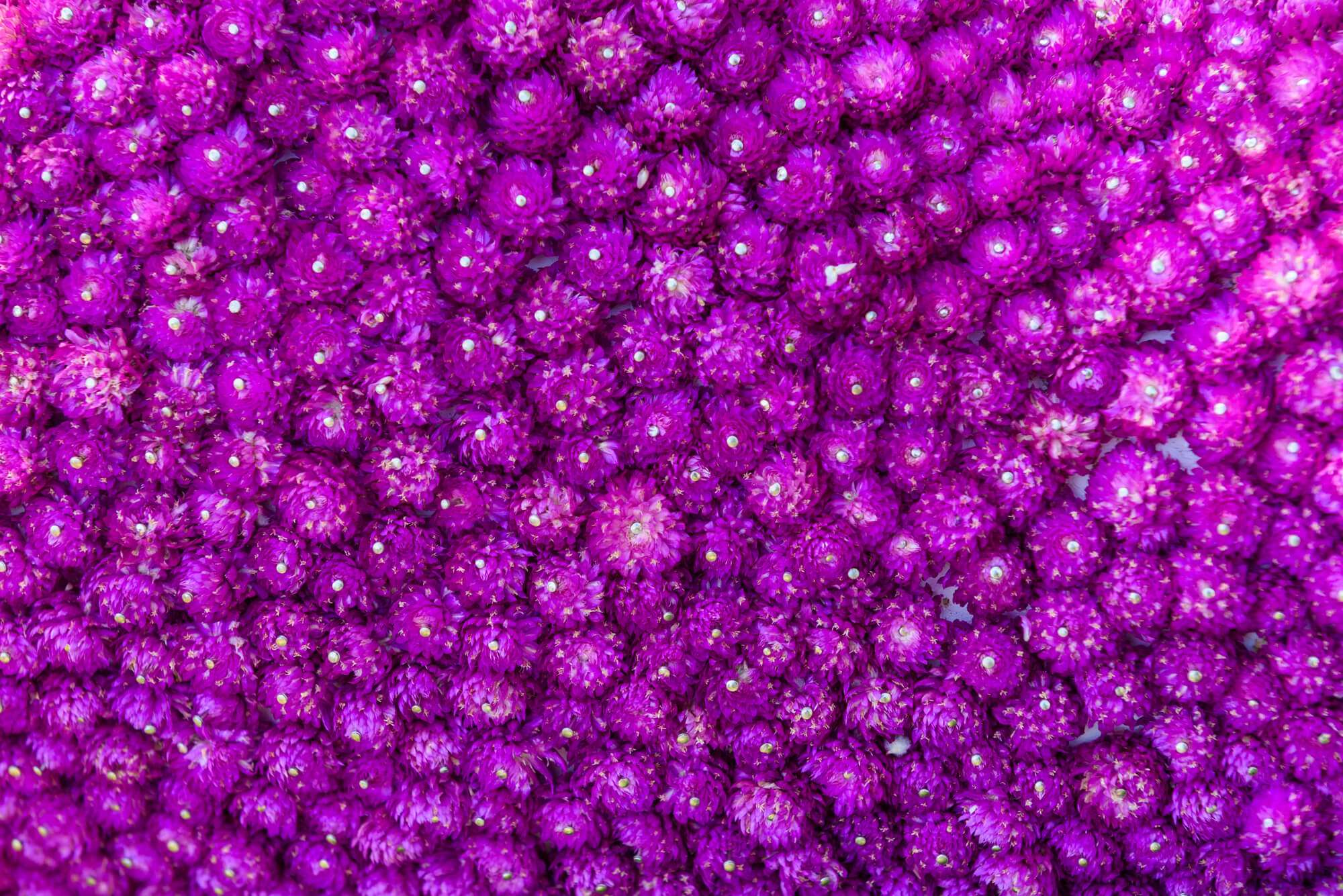 Flowers exist in a massive variety of shapes and colors, with hundreds of methods to categorize them for easier browsing. Following the alphabetical order is one way you can get the job done, so we’ve decided to put together a list of flowers that starts with A.

If you’re interested in learning more about these flowers, keep reading as we discuss features and information regarding each plant.

Aconitum is a genus of flowering plants with over 250 members, most of which are poisonous. Hood-shaped and spiky, these flowers are also called Aconite, Monkshood, Wolfsbane, Devil’s Helmet, Queen of Poisons, and Blue Rocket.

Beautiful yet dangerous, Aconitum comes from “akónitos”, a Greek word meaning pointed cone, which is a tribute to its use as an arrow poison. The plant has also been used in medicine to treat various conditions such as asthma, colds, migraine, and rheumatism.

Also known as Dickson’s Gold, the Adriatic Bellflower is a low-growing plant that forms clusters of golden-yellow/green foliage and blue or purple flowers. The leaves look like small hearts while the flowers have star-shaped petals.

Also known as Cape Marguerite, Van Staden’s River Daisy, and Star of the Veldt, these flowers are very commercially popular thanks to their large outline, long blooming time, and extensive shades of hybrids.

Native to Africa, these daisies are a symbol of innocence and purity. They love the sun and can reach up to 2 feet high.

Also called Lily of the Nile and the Flower of Love, flowers of this genus are native to southern Africa. They grow in clusters with funnel-shaped flowers on tall, thin stems.

African lilies are symbols of love and beauty. They’re used as aphrodisiacs and are believed to boost fertility when worn by women. They also have medicinal applications in treating colds, coughs, and heart conditions.

Also called Whiteweed and Floss flower, Ageratum flowers exist in more than 40 species. Native to Central and North America, these are low-growing plants that produce small clusters of fluffy blooms.

Ageratum flowers are symbols of long life. Thanks to the plant’s antibacterial properties, it has medicinal application in treating many conditions including fevers, colds, rheumatism, diarrhea, and spasms.

Commonly known as Bugleweed, the Ajuga genus of flowering plants includes around 70 members. Among its most common species are Ajuga reptans, pyramidalis, and genevensis.

A symbol of joy, Ajuga flowers are small yet beautiful with upright stems and evergreen foliage. Although they can be invasive, these plants have been used in medicine to treat nosebleeds, coughs, anxiety, hormonal disorders, and more.

Since they’re edible, you can add these plants to salads. Alcea is known to treat conditions such as constipation and dry cough.

Commonly called Lady’s Mantle, this award-winning plant produces clumps of green foliage with greenish-yellow flowers that look like small stars. They can reach up to 18 inches high and are great for attracting butterflies.

With over 800 members in the genus, Alliums are garlic- or onion-scented bulbs that produce ball-shaped flower clusters. They’re called ornamental onions and look like huge lollipops of length up to 6 feet!

Also called Lily of the Incas and Peruvian Lily, Alstroemeria is a genus of more than 50 species that form trumpet-shaped flowers. Named after its discoverer,  Claus von Alstromer, this genus is among the most popular and best-selling cut flowers across the globe.

Also known as Sweet Alyssum and carpet flower, this low-growing plant produces a gorgeous spread of tiny cross-shaped flowers. It’s native to Europe and is considered an invasive species in California.

Native to North and Central America, Amaranth is commonly known as Pigweed. The plant is characterized by long, reddish stems with large leaves and dense inflorescences of flowers.

Amaranth has edible seeds and foliage, which are packed with protein, fiber, calcium, and iron.

Amaryllis is a genus with 2 members only. It produces scented, trumpet-shaped flowers that symbolize pride and confidence.

Amaryllis belladonna is also called “Naked Lady” because it demonstrates “hysteranthy”, a phenomenon where flowers appear before leaves.

Also known as Blue Star, the Amsonia genus is famous for its star-shaped flowers that feature 5 pointed petals sitting on a tubular base.

Easy to grow and maintain, Amsonia looks great in cottage gardens and garden borders. These flowers can also help you attract hummingbirds and bees.

Widely referred to as Windflower, the Anemone genus includes over 100 species originating from North America, Europe, and Japan.

These flowers should only be enjoyed by sight as all parts of the plant are toxic to humans and animals due to the presence of protoanemonin.

If you’re planting borders, beds, or containers, flowers from the Angelonia genius can be a fantastic option in your garden. Also known as Summer Snapdragons, these flowers love the sun and demand well-drained soil for optimal growth.

Thanks to their eye-catching trumpet-like shape, flowers in the Brugmansia genus are referred to as Angel’s Trumpet. Despite their beauty, they’re very toxic to humans and animals due to the presence of tropane alkaloids.

Additionally, the plant has strong anticholinergic properties, so it’s used to alleviate depression, anxiety, and pain. It can also induce hallucinations and euphoria.

Also called St. Bernard’s Lily, this flower is native to Turkey and Southern Europe. Its shape is somewhere between a star and a trumpet, with yellow prominent anthers.

The plant loves direct sunlight and can reach up to feet high. It also attracts bees and works great in rock gardens or borders.

With more than 1,000 species in the genus, Anthurium is also referred to as Flamingo Flower, Laceleaf, and Tailflower. These flowers are known for their unusual look, which is often misunderstood.

What most people think is a large heart-shaped flower is actually a modified leaf. The flowers are actually present along the contrasting spadix.

The Antirrhinum includes more than 25 species that produce scented, 2-lipped flowers sitting on tall spikes on top of the leaves.

The flowers closely resemble a dragon opening its mouth and when lightly squeezed look like a dragon’s head, which is where the names Snapdragon and Dragon Flower came from.

Also called Columbine, the Aquilegia genus includes about 65 species of flowers. Native to North America, the flowers owe their unique shape to the 5 rounded petals sitting alternatively on top of 5 pointed sepals with spurs radiating from the base.

A rare rock cactus, the flowers of this plant are funnel-shaped with thin petals and a cluster of stamens at the center. Native to Mexico, it’s named as a tribute to one of the country’s former presidents, Alvaro Obregon.

One of the most popular flowers for a variety of occasions and events -including weddings and funerals-, the arum lily is also known as the Calla Lily.

These showy flowers have a unique funnel-shaped spathe with a protruding spadix. If any part of the plant is ingested, it can be very toxic or even fatal to humans and animals.

Also called Milkweed, flowers in this genus are tiny and star-shaped. They give off a sweet scent, effectively attracting insects such as bees and butterflies.

Part of the Asteraceae family, the Aster genus has well over 150 species. These flowers have yellow centers with one or multiple rings of petals surrounding them, giving them a daisy-like look.

Last but not least, Azalea flowers are a delight to witness as they appear in clusters of bell-shaped or tubular blooms above evergreen foliage. Native to North America, Europe, Asia, and Northern Australia, these flowers represent temptation and caution.

Wrap Up on Flowers That Start With A

As you can tell by now, there are many beautiful flowers that start with A. Each one has something unique to offer, so you’re bound to find a flower that matches your taste.