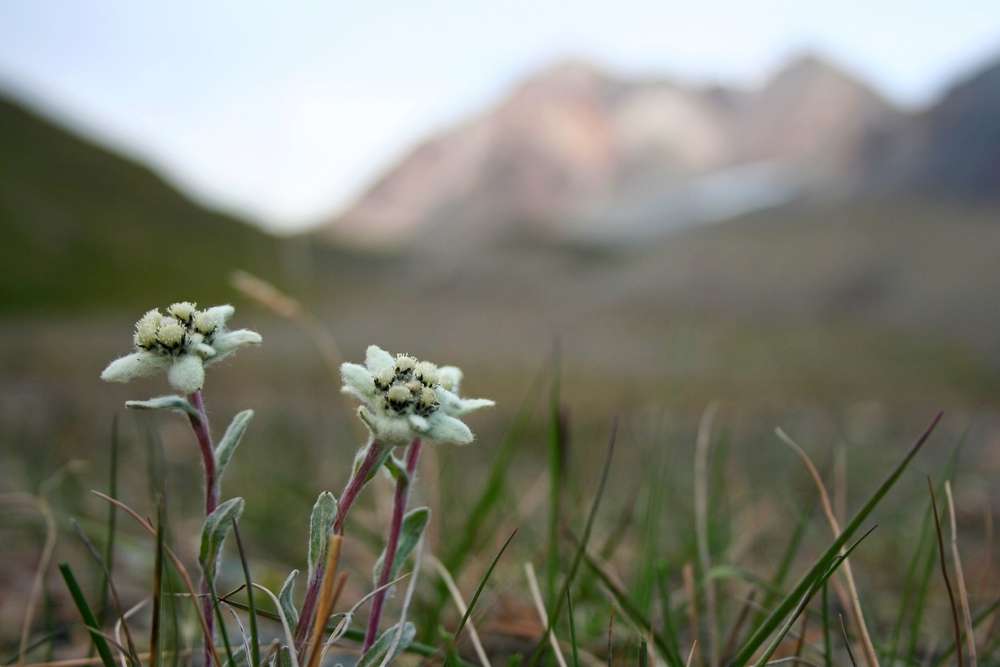 The Edelweiss flower is only available in white, but its symbolic meaning extends beyond its color. If you’re curious about edelweiss flower meaning and symbolism, you’ve come to the right place!

Edelweiss is frequently associated with the concepts of purity, new beginnings, and innocence. Nonetheless, this flower was involved in so many love stories that it came to represent love and devotion. Finally, because it was used to honor adventurers, edelweiss also represents strength and nobility.

Stick around to learn more about each meaning of this flower in depth. Besides, you’ll be surprised to know how this little charm transforms into a magical serum for your skin.

So, shall we get started?

What’s the Meaning and Symbolism of Edelweiss Flowers?

What can we say, this gracious flower has so many stories that it has multiple symbolisms. The edelweiss flower was the main character in peaceful, romantic, and adventurous genres. Let’s take a closer look at each story to learn more about its symbolic meanings:

We’ll begin with the traditional meaning of edelweiss, which derives from its white color. This blossom reveals quite lovely meanings revolving around innocence and purity.

We all enjoy a good love story, and Edelweiss was a part of many!

In Europe, there’s always a romantic feeling associated with this flower. If we go back in time, there was a famous story about a devoted lover who kept risking his life to get edelweiss. He wanted to show his love and bravery to the woman he loved by climbing steep rocky mountains to bring her this flower.

Before we continue, let’s take a moment to thank God for flower shops! Anyway, in 1861, this brave man inspired German author Berthold Auerbach to write the novel ‘Edelweiss.’ Berthold overstated the difficulty of acquiring an edelweiss in this novel. He said, “The possession of one is proof of unusual daring.”

In another story, edelweiss shone as brightly as a cupid in Austria. During a hike with his wife Sisi, Austrian Emperor Franz Joseph stopped to pick an edelweiss flower and give it to her. Since then, the white charm has gained romantic significance in Austria.

Because of these and other stories, edelweiss can also carry the meaning of love and deep devotion.

This is one of the oldest symbolic meanings of edelweiss. Mountain climbers usually associate it with strength and nobility. Moreover, several mountain climbing clubs have adopted its shape as their logo.

Get To Know Edelweiss a Little Better!

We’ll now take you on a journey to learn more about this stunning flower:

When your eyes first land on edelweiss, you might think a lot is going on, and you’d be right. Technically, edelweiss is a cluster of florets rather than a single flower.

In two to 12 yellow flower heads, more than 50 to 500 florets huddle. They’re then surrounded by five to 15 wooly white petals that are actually bracts, giving them the look of a star.

In the wild, edelweiss flowering stalks can grow to be 1 to 8 inches tall. Whereas in cultivation, they can reach a height of 16 inches.

Although it’s a small flower, its complexity speaks volumes!

Edelweiss, scientifically known as Leontopodium alpinum, is a member of the Asteraceae family. The Asteraceae, also recognized as the Compositae, is one of the largest plant families. It includes over 1,620 genera and 23,600 species of shrubs, herbs, flowers, and trees spread all over the world.

Some of the edelweiss’ famous relatives include sunflowers, daisies, dahlias, zinnias, and lettuce.

This fuzzy flower originated in the Himalayas and eventually made its way to the Alps. Scientists believe this migration occurred during the Ice Age. Because edelweiss is a mountain flower, it’s native to mountainous European destinations. For example, you can find it growing in the Alps, Pyrenees, and Carpathians.

Edelweiss is spotted in a variety of Alpine countries at elevations ranging from 2,000 to 3,000 meters. The highest flower sighting was at 3,140 meters, just above Zermatt in Switzerland.

Moreover, it has become a national symbol in the following countries:

With the altitudes we’ve mentioned, you can tell they’re tough! Edelweiss flowers are designed to withstand the harsh mountain climate which includes low temperatures, wind, and rain. Interestingly, just like a good weatherproof jacket, the flower has hairy petals that act as barriers, protecting the plant from strong winds and rain.

Leontopodium bloom from July to September, preferentially on limestone rocks. However, you can also find it growing at the edge of meadows. Either case, they require cold temperatures to thrive.

They were first cultivated and grown in gardens in the 1990s. Now they’re planted in the United States, in USDA hardiness zones 4 through 7.

Is Edelweiss a Rare Flower?

Although Berthold Auerbach went overboard in his novel about how difficult it is to find edelweiss, this isn’t entirely accurate. This flower is common, but at higher elevations, making it challenging to obtain.

However, this beauty was threatened at some point, when travelers became obsessed with it. As tourism flourished, particularly in Switzerland, people started excessively picking it as a souvenir.

In 1878, the canton of Obwalden stepped in to make things right. They established strict guidelines prohibiting people from picking edelweiss. These guidelines were regarded as one of Europe’s first environmental protection laws.

Thanks to these laws, this species is no longer considered endangered. Nonetheless, this flower is still listed as a protected plant in a few cantons.

What Inspired the Name Edelweiss?

Naturalists and botanists came up with a slew of cool names to describe the distinctive shape of this bloom. Yet, edelweiss, a German name, became the most popular.

As time passed, that became the name that famous botanists frequently used. Consequently, by the mid-nineteenth century, the edelweiß had become synonymous with this flower.

As for Leontopodium, it’s a Latin name that actually refers to a Greek term that means “lion’s paw.”

We love how descriptive both of these definitions are!

Nonetheless, this is just the tip of the iceberg in terms of names. Until this flower had an official name, several botanists and biologists coined creative names to describe it:

What Are the Health Benefits of Edelweiss?

Yes, edelweiss has significant health benefits! This flower was used to make teas and infusions that ended up being one of Europe’s traditional remedies. It was used to treat the following ailments:

What’s more, this bloom has worked wonders in the field of skincare. Ladies, you may have noticed edelweiss on some of your products, particularly the sunblock.

It contains a high concentration of flavonoids, which are high in antioxidants. They help protect the skin from environmental stressors. In other words, it prevents harmful UV rays from reaching your skin, making it an ideal natural sunblock component.

You can also find edelweiss as an ingredient in high-end anti-aging creams. This furry plant extract contains natural compounds that work to neutralize free radicals in your skin. In addition, they help prevent the amplification of oxides involved in the skin’s aging process. Finally, they work to prevent collagen degradation to keep your skin firm and supple.

Not to mention that these natural compounds keep your skin moisturized and help restore blood flow.

Wrap Up On Edelweiss Flower Meaning

Edelweiss is a magical species with a lot to offer. When we think of edelweiss flower meaning, many things come to mind, all of which are wonderful symbolism.

If you ever made it from the couch to the Alps, look for one; it’s a sight to behold!