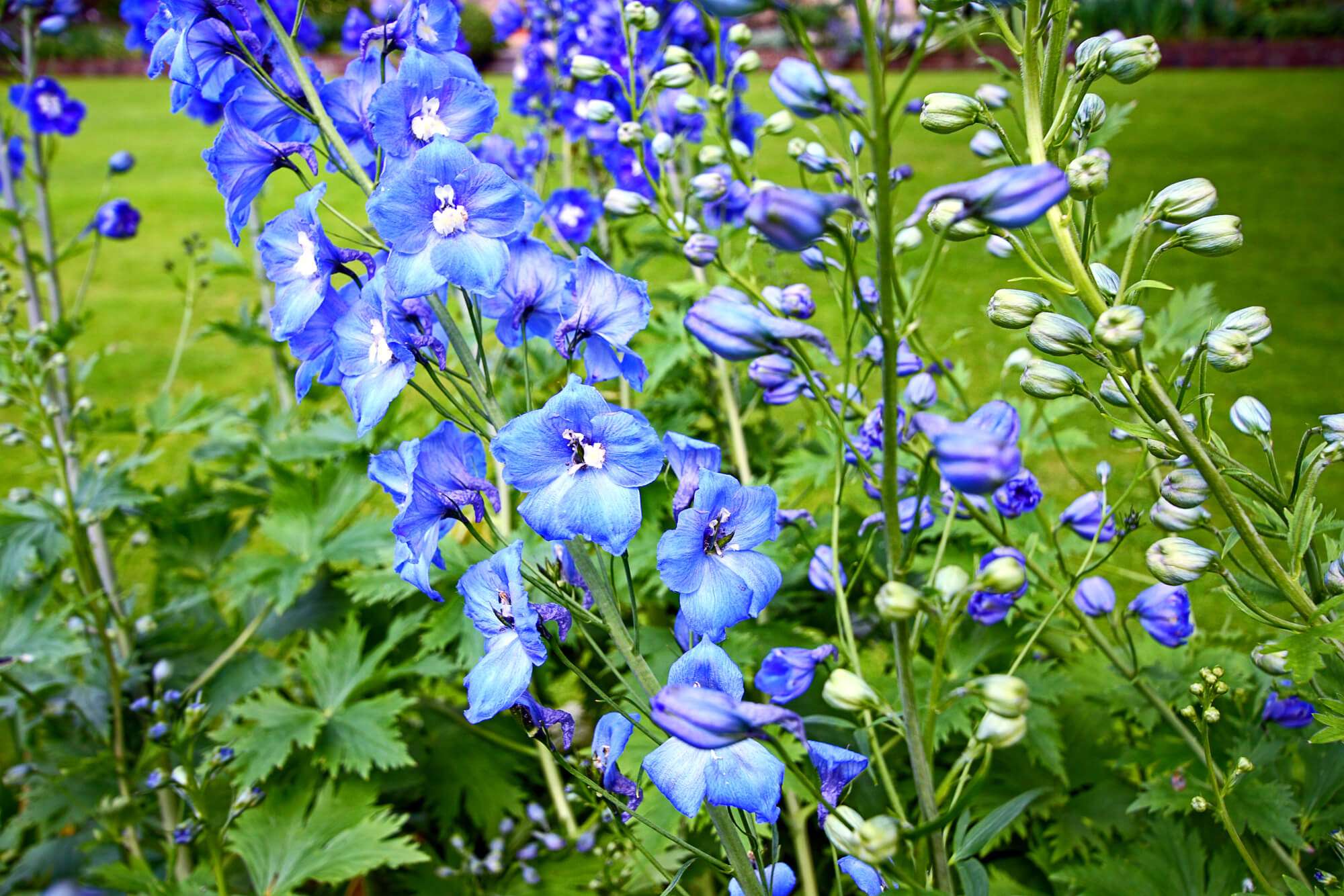 Despite their fragile stems, delphiniums are still one of the most common options in bouquet arrangements. So what is the Delphinium Flower Meaning?

Delphiniums can reflect an open perspective, light-heartedness, remembrance, and reaching for one’s goals. They also have an idyllic atmosphere that inspires safety and innocence.

In this post, explain the symbolism of different delphinium varieties. I hope this information helps you decide which one is best for you!

The delphinium (sometimes called the larkspur) happens to be a perfect cutting flower for people with July birthdays.

However, there are a bunch of different varieties out there to choose from. Each of the various colors might reflect a slightly different message. So, you’ll have to take a pick that reflects the meaning you need the most.

Here are the top delphinium colors for you to consider:

Ranging from dark and intense purple to softer shades of lavender, this is one of the most common colors for a delphinium cut.

Just as is the case with any purple flower, the rich color screams royalty and adds a sense of dignity. This makes them a particularly good option for when you want to pair wealth with idyllic loyalty.

Besides that, the purple delphinium could actually symbolize first love in its prideful and rushed romance. However, it’s probably a good idea to get a minimalistic vase to tone down the boldness, though!

There are a few gorgeous shades of blue delphinium flowers to consider, and they’re all surreal. Even their names radiate positivity to the air!

For one, you have the Cobalt Dreams, which is just a stunning shade of blue. You can go for a cutting of this variety if you want to make a bold statement supporting someone through a tough challenge.

Alternatively, the Blue Lace is a calmer and stripped-back flower variety that could work in remembrance of a lost loved one.

All in all, the blue larkspurs or delphiniums are a dignified and graceful gift.

As it turns out, yellow is more than a cheery and optimistic color. It can also reflect intellect, logic, and wisdom.

Similarly, giving out yellow delphiniums can be an act of warm but analytical thinking. It can be a great option if you want to tell someone that they’re taking joyous and successful little moves in life!

However, you’ll need to keep in mind that the symbolism of yellow is going to vary from one place to the other. For instance, if you live somewhere with cloudy and rainy weather the majority of the time, you’re more likely to find cheer in the color yellow.

So, consider what the person you’re gifting the flowers to might think of the color before opting for yellow delphiniums.

The Delphinium cardinale is also known as the Scarlet Larkspur, and it’s perhaps, the boldest of the bunch.

With the same subtle profile of all delphiniums but a bright red color, it’s showy and bold without being too extreme. It sends a message of lightheartedness and says that you’re open to living new experiences.

If you’re looking to leave an unforgettable first impression as a wild spirit, these might be the ones for you.

One other use for it is as a garden border. To really make your home’s fun energy stand out from the crowd, pair them with chaparral shrubs, geophytes, and a few succulents. You might need a supporting frame to keep the weak delphinium stakes from bending, though.

Moving on from bold delphiniums, you can’t resist the purity of the Guardian White variety.

There’s something so serene and innocent about white delphiniums. They’re bubbly and reminiscent of youth, goodwill, and tender nature.

If you’re looking for a cut flower for your summer wedding, the white delphiniums could come to the rescue!

Either in a bridal bouquet or a centerpiece, it should reflect romance, elegance, serenity, and a hint of rustic vibes.

On the other hand, if you decide to stick to the classic beauty of the Guardian White in your garden, you might even get a tiny hummingbird visitor in your backyard! Turns out, the delphiniums can bring more than just positive vibes!

Yet, it’s important to note that their connotation isn’t always positive. If someone pairs them with a not-so-humble attitude, white larkspurs could translate as haughtiness or conceit. So, tread carefully here!

Much like the white varieties, pink delphiniums are also associated with youth. However, it relates more to celebrating new life, like a birth.

The Pink Punch is perhaps the most common pink variety of the Candle Larkspur, and they’re only slightly less showy than the scarlet flowers.

So, if you’re looking for a bouquet to go along with a girl’s baby shower gift, pink delphinium might be the thing you need.

For some people, the pink varieties are even more romantic than the other ones. Since they also tap into the feminine side, they might be a good choice if your partner has a birthday in July.

Just be careful, though. Some people tend to take away a negative message from pink delphiniums by believing that it’s a fickle flower.

Innocence, embracing life, and open perspectives are common themes with most delphinium flowers. Yet, there are also historic sides to keep in mind.

Through the years, the flower represented nature, heroism, and death, all while maintaining its position as protection from evil.

Let’s take a closer look at what all that means:

The Greeks not only found the striking resemblance between the flower and a dolphin’s nose, but they also intertwined it in myths of great bravery.

If you’re into the mythology, you might remember the delicate flowers blooming from Ajax’s blood after dying in combat. Nothing says heroism more than that!

When you think about it, it actually ties back to how we associate blue delphiniums with remembrance today.

On the other hand, we have the delphinium popping back into the methodology when Hyakinthos had flowers sprouting from his dead head. This is yet another association with grieving and remembering lost spirits.

However, there are different opinions on whether it was hyacinth or delphiniums in this particular myth.

In ancient times, people would use delphiniums as a guarding flower against dark magic and evil witches. In fact, sometimes, the flower was used in bathwater during the Victorian era for the same reason.

You don’t have to believe in the supernatural to understand how people used to view this flower as a force of innocence.

This is perhaps why we still view the delicate delphiniums as pure and spiritual.

Native Americans also believed that the delphinium flower had protection abilities, and so they would use it to ward off the scorpions.

Plus, it’s also possible that they used blue petals to dye their textile. In a way, it did have relevance in their lives back then, but not just for its beauty.

Don’t let all that talk about positive meaning and potential uses through history make you forget that delphinium flowers are potentially toxic. They’re under no circumstances to be ingested by either humans or pets.

While this takes a bit from its meaning as an innocent flower, it does feed into the “beauty kills” narrative!

From celebrating birth to remembering lost ones, there’s always a delphinium flower that can send the right message.

So, the next time you want to go for an anything-is-possible vibe with brilliant summer colors, a delphinium flower might be your best bet!