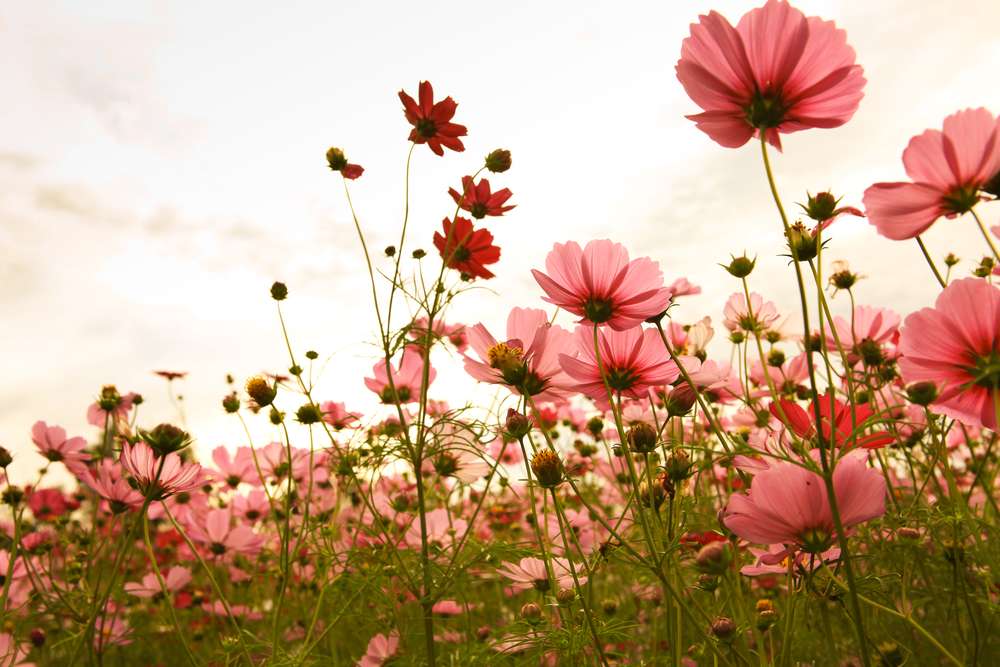 Interested in cosmos flower meaning? Then this article is for you!

In general, the cosmos flower is a symbol of harmony, order, beauty, kindness, independence, and resilience. Depending on the petals’ color, they can also represent love, passion, wisdom, peace, happiness, faithfulness, and balance.

The cosmos flower belongs to the genus Cosmos of the family Asteraceae. It exists in a wide variety of colors including shades of pink, purple, red, orange, white, yellow, and brown.

The flowers possess a delicate daisy-like shape, blooming individually or in clusters depending on the species. They’re also highly fragrant, producing strong sweet or sugary scents.

Cosmos flowers were introduced to Spain in the 1500s by Spanish explorers who came back from Mexico. By the end of the 1700s, the popularity of the flower had extended to England and the rest of Europe, then to the United States in the 1800s.

The name ‘cosmos’ was given to these flowers by Spanish priests who admired the intricate harmony and order of the bloom. They decided to derive its name from the Greek word ‘kosmos’ which offers the same meaning.

What Does a Cosmos Flower Mean?

Since the name cosmos is derived from the Greek word ‘kosmos’ that stands for order and harmony of the universe and its creatures, the cosmos flower is also a symbol of order, balance, stability, and harmony.

You may have noticed the resemblance between the word ‘cosmos’ and the word ‘cosmetics’, which is an indication of the flower’s association with beauty, elegance, and charm.

The cosmos flower represents kindness. In fact, it’s the official flower/symbol of the World Kindness Movement and the connected World Kindness Day, which was first established back in 1998 and debuted in Japan.

The reason for this association is the fact that cosmos plants bloom generously despite being in harsh conditions and receiving minimal care. This is the type of message the movement is trying to spread; empathy, selflessness, and peace.

The cosmos flower may look super delicate and dainty, but it’s also one of the most sturdy plants out there. They thrive in harsh conditions and don’t require special soil or watering to flourish.

As such, cosmos flowers are often found sprouting between sidewalk cracks. This goes to show how self-reliant these flowers can be.

This also explains why cosmos blossoms are a symbol of Independence. They serve as a reminder that all you need to succeed is already within you.

Additionally, the cosmos flower represents perseverance and resilience. This is because cosmos blooms come back stronger and more vibrant after you remove them from the plant.

What Do Cosmos Flowers Symbolize?

Now that you understand the general meanings behind the cosmos flower, it’s time we take a look at the symbolization of cosmos flowers across different colors, cultures, art, and spiritual practices.

Cosmos flowers come in a wide variety of colors, each of which carries a unique significance.

Like many other red blooms, red cosmo flowers are a symbol of deep passion, romantic love, and everlasting devotion. This makes sense as red is widely regarded as the color of profound emotions and dramatic feelings.

Red cosmo flowers also represent primal energy, fiery desire, pleasure, confidence, commitment, and boldness. They’re a perfect gift to your significant other if you want to express your undying love and passion on anniversaries, dates, and Valentine’s Day.

As gifts, pink cosmos flowers will show your appreciation and love. They make for charming bouquets on Mother’s Day, Valentine’s Day, anniversaries, and weddings.

While not as widespread as pink cosmos flowers, there’s no doubt that purple cosmo blossoms are stunning. They come in various shades ranging from lighter hues such as lavender and lilac to darker tints such as violet.

Typically, lighter shades of purple are associated with calmness, elegance, and kindness, whereas darker shades are linked to royalty, wisdom, and dignity.

As gifts, purple cosmos are suitable for letting a loved one know you’re thinking of them, wishing them a speedy recovery, or congratulating them on a certain success.

White in flowers’ symbolism has always stood for purity and innocence, which is also the case for white cosmos flowers. Coupled with the delicate shape of their petals, these blooms also represent hope, faith, and genuineness.

As gifts, white cosmos flowers are a great way to show your care and support. They’re suitable for affectionate gestures, Mother’s Day, and wedding arrangements.

Orange in flowers is a symbol of cheerfulness, sunshine, warmth, and positive emotions. The same goes for orange cosmos flowers.

As such, orange cosmos flowers make for wonderful gifts if you’re trying to reconcile with someone you care about or looking to show joy and acceptance.

As gifts, yellow cosmos blossoms can express your deep care towards the person on the receiving end. They’re a perfect way to bring a smile to a loved one’s face and will surely cheer them up and add some joy to their day.

Cosmos atrosanguineus is a variety of cosmos flowers that possess dark maroon or brown petals. These blooms are also known as chocolate cosmos due to their unique cocoa-like fragrance.

Brown cosmos are a symbol of harmony, stability, and security. They represent earthiness, richness, and feeling grounded.

Many varieties of cosmos flowers are native to Mexico, which explains their close association with various rituals and traditions in Mexican culture.

One of the most prized cosmos blooms in Mexico is the chocolate cosmos thanks to its rich brown color and cocoa-like scent. The flower is a symbol of harmony, earthiness, and order in Mexican culture.

As I mentioned earlier, the word ‘cosmos’ is derived from the Greek word ‘kosmos’. In Greek culture and mythology, kosmos is the harmony of nature and the order of the world.

As such, when Spanish priests named this flower cosmos, they meant for it to represent these concepts.

The popularity of floriography was raging during the 1800s, which is when the Victorian period took place.

Floriography is the language of flowers where different blossoms and plants get assigned various meanings and symbolization. This way, people can use them to express thoughts and emotions or send subtle messages.

The meaning of cosmos flowers in Victorian floriography varies depending on color. But in general, they represent love, joy, and affection.

Cosmos flowers are believed to be an omen for good luck. This probably originated from the plant’s ability to deter pests and insects.

Additionally, it’s said that if you want faeries to visit your garden, you should plant cosmos blooms. Their wild, untamed look is supposed to mimic the homes of these mythical creatures.

In Literature and Art

Frequently portrayed in poetry and art, cosmos flowers are used as a symbol of harmony, balance, order, and stability. Their hardiness and resistance to drought also caused their use to represent determination and longevity.

It’s said that cosmos flowers are beneficial to throat energy or chakra. Their effect is expressed in eliminating spiritual blockages and removing negative energy.

There you have it, everything you need to know about cosmos flower meanings, symbolization, origin, and characteristics.

Generally, the cosmos flower represents harmony, order, beauty, kindness, independence, and resilience. It can also be a symbol of love, passion, wisdom, peace, happiness, faithfulness, and balance depending on its color.