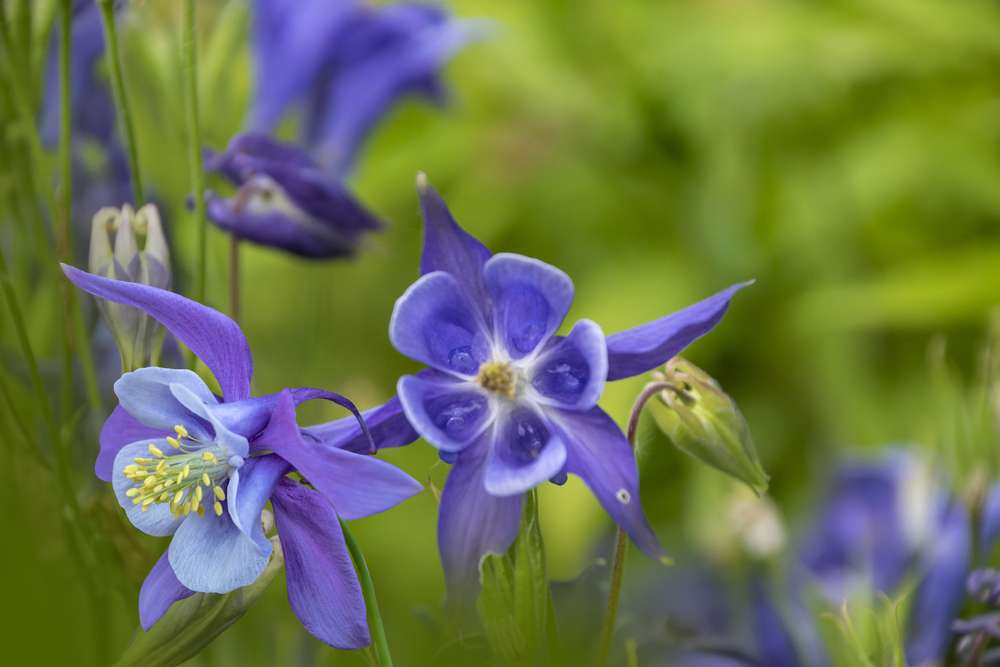 Columbine is a common name for the flowers of the plant of the genus Aquilegia. This perennial flower is known for its spurred and bell-shaped radiating petals.

The flower is found in various parts of the Northern Hemisphere, and for that reason, the columbine flower meaning varies significantly according to time and location.

One of the most popular meanings of the columbine flower is foolishness, which comes from its unique shape that resembles a court jester’s hat. The flower is also said to represent courage and fortitude in tough situations as well as hope and faith in a better tomorrow.

If you’re interested in finding out more about this unique flower’s meaning as well as its origin and significance in other cultures, keep on reading this brief guide!

Origin and Etymology of the Columbine Flower

As previously established, columbine isn’t the only name of this flower. The flower goes by its genus name “Aquilegia”, which belongs to the Buttercup family, also known as “Ranunculaceae”.

Additionally, the flower is also nicknamed “Granny’s bonnet”, which refers to the shape of the flower’s petals.

The word columbine is derived from the Latin word “Columbinus”, which means “like a dove”. This also comes from the shape of the flower, which resembles a cluster of small doves.

The true name of the flower, however, is Aquilegia. In Latin, this word means “Eagle”. This also comes from the look of the flower. But this time, it describes the spurs of the flower, which look like the sharp talons of an eagle.

The aquilegia plant thrives in relatively damp places that have plenty of shade, which is why their natural habitat is usually woodland, meadows, and areas with a lot of trees.

The flower’s point of origin is unidentified but it has been growing in the wild in various spots all over the world, including in Europe, Asia, and North America.

What Does the Columbine Flower Mean?

While the columbine flower’s meaning may vary from one culture to another, most of its meanings are usually derived from its nature and unique appearance.

In this section, we’ll take a closer look at the meaning of the columbine flower and its significance.

One of the old meanings of the columbine flower that is still used today is foolishness. This one comes from the fact that columbine petals look like the court jester’s hat.

In fact, this symbolism is used to foreshadow foolishness in several works of Shakespear, such as Love’s Labor Lost.

You can even find it in Hamlet’s Act 4 in Scene 5 where Olivia says to king Claudius “There’s fennel for you and columbines” where fennels represent flattery and columbine represents him being a fool.

Columbine was also regarded as a symbol of courage, winning, and powering through hard times, and was often gifted to those who manage to overcome their fears as a symbol of their courage.

On the other hand, seven columbines will have a religious connotation, but more about that later.

Since doves are the worldwide symbol of peace, it’s no surprise the flower that is named after them is also regarded as a symbolic flower of peace and wisdom.

What Do Different Colors of the Columbine Flower Symbolize?

The columbine flower comes in a wider range of colors, and like all other flowers, each color will have its unique interpretations and symbolism. Let’s have a quick look at the symbolic meaning of each color of the columbine:

Purple is one of the most popular colors of columbine and exists in the vast majority of its species.

The color purple generally represents nobility and wealth. But in columbines, it mainly represents penance, spiritual evolution, and harmony with nature. The Earlybird Columbine is a popular purple cultivar that exists in both blue and purple.

The most notable example is the McKana Hybrid columbine. This one is a popular symbol of happiness and is considered good luck in some regions.

Pink columbine flowers, such as Caerulea Kirigami and Songbird Columbine, are popular symbols of love between family members.

White columbines represent spiritual enlightenment and purity. They’re also used in wedding receptions due to their unique and attractive looks.

Columbine Flower Significance in Other Cultures

The columbine flower is found in a wide range of regions all over the world, especially in the Northern Hemisphere.

For that reason, it’s no surprise that the flower has a lot of significance and interpretations in various cultures.

The Ancient Greeks regarded the columbine flower as a symbol of love and beauty. The reason behind this symbolism is that the flower was associated with Aphrodite, the Greek Goddess of Love.

The Roman equivalent of the previously mentioned goddess Aphrodite was “Venus”, and like the Greeks, people of Ancient Rome also associated the flower with love, beauty, and desire.

Many species of the columbine flower can thrive in relatively cold weather, and for that reason, the flower has thrived up high in Northern Europe.

In Norse Mythology, the flower was associated with Freyja, the Goddess of Love and Fertility, and the wife of Odin, the chief god of the Nordic gods.

For that reason, in the Vikings’ culture, the flower was boiled and used as an aphrodisiac because it was believed to boost desire between lovers.

Columbine also had a lot of symbolism in Christianity and was featured in many of its stories. For example, the columbine is a popular symbol of the humility and victory of life over death, being associated with the Holy Spirit and Christ.

The Celtic culture was always fascinated by the connection between our world and other worlds. For that reason, they considered many animals and plants to be portals between the worlds.

While there aren’t enough reports of this association, it’s fairly established that ingesting the toxic plant may induce hallucinations, which explains this association.

Native Americans used various plants to make tinctures and remedies to their ailments. Despite the toxicity of the flower, it’s said the columbine flower was used in small quantities to treat some diseases back in time.

However, like in the Celtic culture, there aren’t enough reports or information about the nature of diseases or how the Native Americans prepared the flower.

In the United States

As a flower that grows naturally in the habitat of the Rocky Mountain. The columbine is a popular flower in many American states, especially Colorado.

In fact, the Colorado blue columbine isn’t only named after the state, but it has also been the official flower of the State of Colorado since April 1899.

This marks the end of today’s guide about the columbine flower’s meaning and symbolism. As you can see, the flower has several meanings that it has picked up due to its shape and cultural significance.

Ideally, columbine is commonly used as a symbol of courage and fortitude in difficult situations. However, the flower’s shape makes it a popular symbol of foolishness, especially after the use of the flower in Shakespear’s play Hamlet for that purpose.

Additionally, the color of the flower can have a massive impact on its meaning, as the flower exists in several species and shades of blue, pink, yellow, and purple. That being said, the delicate beauty of the columbine flower makes it a perfect gift for any flower lover!