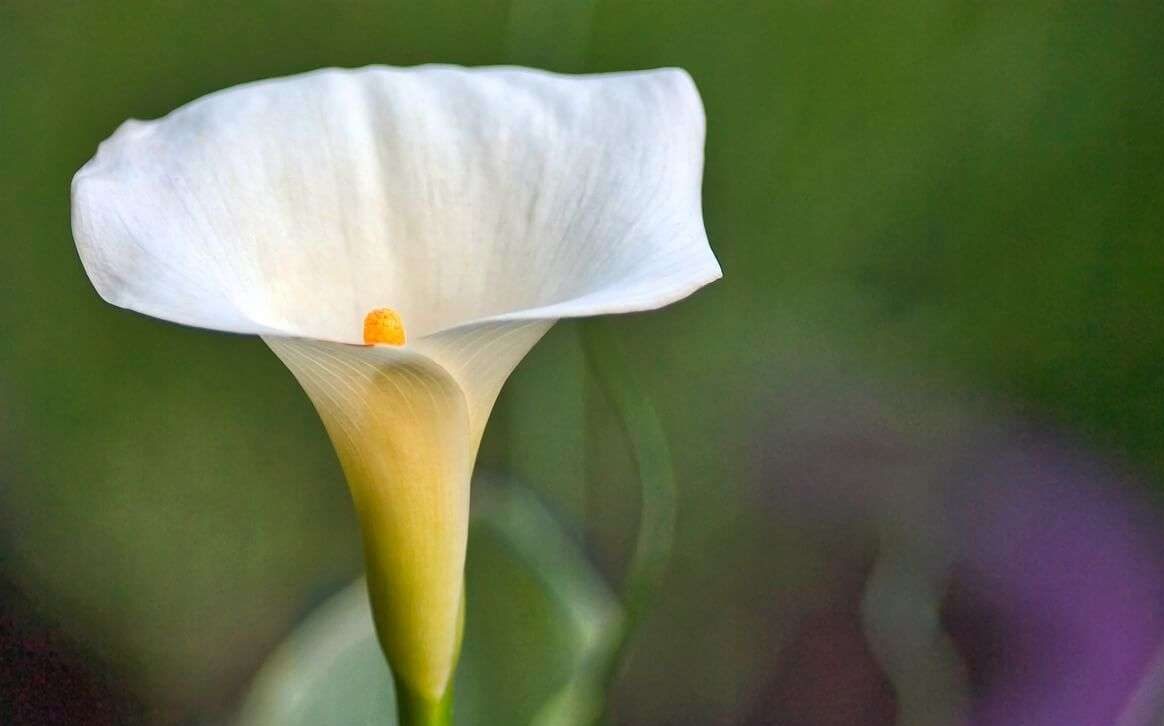 Peace lilies are much larger than calla lilies, often growing up to six feet or more in height. In comparison, calla lilies only grow up to three feet tall. Furthermore, peace lilies don’t require as much water as calla lilies.

In this calla lily vs peace lily comparison, we’ve listed the biggest similarities and differences between the two plants. Which plant should you get? Let’s find out!

Brief History of the Calla Lily

Calla lilies are native to South Africa, particularly in Swaziland, Mozambique, and Lesotho. No one really knows how they made their way to other parts of the world, but we do know that they’ve naturalized in Malawi, Kenya, New Zealand, Zambia, California, and Western Australia.

Calla lilies were first depicted in the 1664 illustration of the Royal Garden of Paris. However, it wasn’t until the 18th century that they were named and studied.

Carolus Linnaeus, a Swedish botanist who formalized binomial nomenclature, mistakenly thought calla lilies were lilies, and thus called them as such. German botanist Karl Koch attempted to correct the misnomer by classing the flower in the genus Zantedeschia instead of the genus Lilium, but the damage was done. The name “calla lily” was stuck.

Thanks to their depiction in the bible and Greek mythology, calla lilies became increasingly popular in the 20th century. They were used in weddings, anniversaries, and romantic bouquets. Since they also symbolized rebirth and resurrection, they often made an appearance in funeral arrangements.

Today, calla lilies are a well-known fixture in American art, fiction, and media. They’re sold in almost every flower shop in the US and across the world.

Brief History of the Peace Lily

Peace lilies are native to the tropical rainforests of Venezuela and Colombia. Like calla lilies, peace lilies belong to the monocotyledonous flowering plants of the Araceae family.

Peace lilies were introduced in Europe in the 1870s. Since then, over 50 different cultivars were developed, most of which have white bracts with the occasional slight green tinge.

These plants were given the botanic name “Spathiphyllum,” which derived from the Greek word “spath,” meaning spoon, and “phyl,” meaning leaves. Thus, Spathiphyllum quite literally means spoon-shaped leaves; a reference to their appearance.

Unsurprisingly, peace lilies represent peace. Their white flowers remind one of a white flag, which is an international symbol of surrender and truce. They’re also frequently associated with prosperity, purity, innocence, and sympathy—much like calla lilies.

Let’s discuss their similarities and differences in further detail.

Peace lilies are significantly taller than calla lilies, growing up to six feet or more in height. Width-wise, they spread anywhere between one to five feet.

Both plants can take on a clumping form.

Peace lily flowers naturally bloom in spring or early summer, but it’s important to note that the bloom isn’t a flower, but modified leaves called spathes. The flowers rise from the center of the arching sword-like foliage in a thick, yellowish spike. Peace lily spathes only come in white.

Calla lily flowers are much like peace lily flowers. The trumpet-shaped structure that sits atop the stem isn’t the calla lily’s flower, but spathe.

Calla lily spathes come in an array of colors, such as white, pink, purple, coral, and yellow. The flower protected by the spathes comes in only one color, yellow.

Peace lilies are only mildly toxic in humans and animals, as they contain calcium oxalate crystals that can be bothersome when consumed.

When an animal bites or chews into the leaves or stems, crystals are released, penetrating the animal’s tissues. Depending on the amount ingested, the damage can be mildly irritating to moderately painful.

Like peace lilies, calla lilies contain insoluble calcium oxalate crystals that cause difficulty swallowing, swelling, and pain when ingested. Swallowing any part of the calla lily plant will result in an unpleasant and often painful experience.

Calla lily poisoning is rare but not unheard of, occurring once every 50 or so instances.

Also, the plant’s juices cause pain, swelling, and burning when they come in contact with skin, which is why it’s advisable to wear gloves when handling calla lilies.

Symptoms of a peace lily and calla lily poisoning are similar:

Due to the risks involved when ingested, it’s advisable to keep both plants away from pets and young children at all times.

In the wild, calla lilies grow near ponds and in the mud. As such, they favor moist environments. Calla lilies can grow in water alone, so they’re often sold in vases filled with water. Still, they live longer in soil.

Calla lilies need to be watered regularly to replicate their natural environment. Their soil must be kept moist but not soggy.

In this regard, peace lilies are similar. Keep the soil moist to the touch, but not oversaturated. Unlike calla lilies, peace lilies can tolerate periods of dry soil, but don’t let them go too long as they might develop brown tips if underwatered.

Like most plants, calla lilies and peace lilies droop when they don’t get enough water. When they look a bit less “perky” than usual, this is indicative of moisture issues. Test the soil with your finger; if it’s dry, water the plants right away.

According to the USDA Plant Hardiness Scale, calla lilies thrive in USDA zones 8 through 10, while peace lilies grow best in USDA zones 11 to 12.

As for peace lilies, their ideal daytime temperature is between 68 and 85°F. When daylight falls, the temperature shouldn’t drop more than 10°F cooler. Plant damage and even death may occur when temperatures drop below 40°F.

Calla lilies and peace lilies are resilient to most diseases and insects. However, they’re not entirely immune to bacterial soft rot, botrytis, and other fungal diseases. They may also get infected with aphids, spider mites, and mealybugs, but you can easily get rid of them by wiping down the leaves or spraying the plant with neem oil.

Calla lilies and peace lilies belong to the same family, so they share a lot of similarities. For one, they’re both water-loving plants that thrive in warm temperatures. They’re also both toxic, with calla lilies being the more toxic of the two, and share the same “lily” misnomer.

The biggest difference between calla lilies and peace lilies is their size, color, foliage, and overall temperature requirements.

Calla lilies are much smaller than peace lilies. They also come in multiple colors instead of just white. Furthermore, they prefer partial to full sunlight and moist to wet soil, while peace lilies prefer bright, filtered light and moist-to-touch soil.