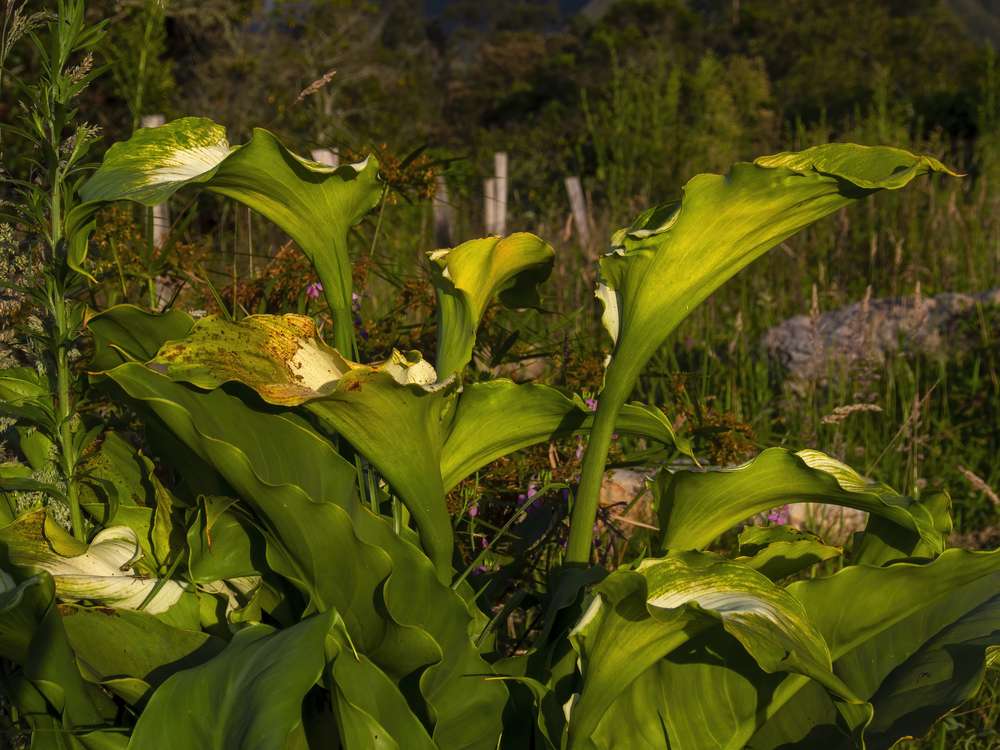 Are you disappointed to see your calla lily leaves curling? Don’t be; like all plants, calla lilies are prone to curling, wilting, and yellowing. Plants don’t express their stress vocally like humans and animals; they instead show it on their leaves.

Fortunately, it’s relatively easy to deal with curled leaves and get them back to their healthy state. But why do calla lily leaves curl?

Calla lily leaves curl for multiple reasons. The most common ones are underwatering, lack of nutrients, and insufficient light. However, it could also be because of a pest infestation.

Luckily for you, there are different symptoms for each of the causes, so you’ll definitely know the cause of your flower’s stress. Here’s everything you need to know.

Why Are Your Calla Lily Leaves Curling?

Like all plants, calla lilies show their distress on their leaves. If they’re yellowing, curling, or drooping, you can be sure there’s something wrong with the flowers. Here are the most common reasons for calla leaves curling.

Light is one of the basic essentials for any plant. The minute your flower isn’t getting enough of it, it’ll start showing its distress. You may notice the leaves yellowing, curling at the edges, or drooping. Some people also reported seeing brown edges on the leaves.

If you don’t know the calla lily’s light requirements, it needs full, direct sunlight. The flower should at least spend hours in the full sunlight; then, you can move it to partial shade in the afternoon and until the night. If you’re not doing that, it’s likely the reason your flower is curling.

Bear in mind that these flowers originally grow in South Africa in water swamps, so they’re used to getting full sunlight every day, and that’s the only way they’ll grow.

Calla lilies need nutrient-rich soil with good drainage. If you’re using the wrong soil, the plant will likely not be getting enough nutrients to thrive, and the curling leaves may be a side effect of that.

For calla lilies, most experts recommend a potting mix that consists of 70–80% coco peat, and the rest is divided equally between fine Finnish peat and coarse Finnish peat. Some plant owners go for a 60%/40% mixture.

If your soil mix doesn’t contain coco peat, you may want to change it for the sake of your flower.

Calla lilies need water only once or twice a week. They can generally endure low water conditions because their soils are moist. So, they can make do with the moisture in the soil. However, that doesn’t mean you should put off watering them for more than a week.

If you see the leaves curling, and you don’t remember the last time you watered them, this is the problem. Your flower is probably drying out and in need of water.

Bear in mind that the watering schedule should differ according to the surrounding conditions. For example, people who live in humid areas don’t have to water their flowers as frequently. On the other hand, if you live in dry weather, you need to water your flower twice a week or more if needed.

If the problem isn’t underwatering, it may be overwatering. Your soil may be failing to drain the water properly, which is causing the plant’s leaves to curl. Check to see if the soil is compacted, and if that’s the case, you should place it over a draining tray.

If the tap water in your area isn’t clean, it may be the reason your plant is curling at the edges. In this case, the only way to fix it is to use mineral water. Or, if you can afford to install a filtration system and use it for watering, it’ll be even better and more cost-efficient in the long run.

The thing with tap water is it may contain some unnecessary minerals that the plant can’t recognize or make use of. These minerals can cause the plant’s leaves to curl if you use the water multiple times.

Like most flowers, calla lilies are an attraction for pests because they have large leaves that are enticing to chew on. Although the lilies are prone to all kinds of pests, including thrips and whiteflies, they mostly get aphid infestations.

Luckily for you, aphids are easy to see with the naked eye, although they’re hard to notice because of their size. You’ll notice tiny white spots on the leaves’ undersides. If that’s the case, then you need an insect repellent, and you need to wash the leaves to get rid of the pests.

If the infestation is severe, you may need to cut some leaves to prevent the aphids from reaching the rest of the plant.

If the leaves curling is due to aphids, you’ll know because they’ll be curling inwards rather than outwards. You may also notice other symptoms, such as yellowing and slow growth.

Calla lilies are originally tropical plants, which means they need a warm or hot temperature to survive. If the weather gets cold, they’ll either go into dormancy or start showing signs of stress. The dormancy is often a late step, but it may happen if the temperature drops suddenly or if there’s frost.

Other than that, the cold temperature will cause the green stalks to droop and the leaves to curl.

Calla lilies thrive in temperatures between 60 and 75 F. If the temperature in your house is lower than that, the leaves are probably curling because of that.

Dormancy is the plant’s equivalent of hibernation. When the winter comes around, some animals hibernate to save energy for when the summer comes again, and some do it because of food scarcity.

Plants that can’t handle the cold will go into dormancy when the temperature drops below their endurance. They’ll be basically preparing their tissues for the cold weather and lack of nutrients. So, instead of making an effort to grow, they’ll stop growing altogether, saving their energy for the summer.

If your calla lily is refusing to grow, and its leaves are curling, there’s a high chance it’s because of dormancy. That’s especially if there’s no sign of pest infestation and if you’re watering it well.

Dormancy usually occurs in late autumn, and it’s accompanied by yellowing leaves with curling edges. The leaves may also turn into a dark brown color.

When this happens, you should stop watering your flower and leave it like this until the weather gets warm again. You should only keep the soil moist so it doesn’t get too dry. Then, when the weather is warm, move the flower to its original place with sufficient light.

You may need to use fertilizer to get the flowers to bloom again, though.

Your plant may have curling leaves simply because it’s not getting enough nutrients for one reason or another. In that case, you may need to use fertilizer to get the leaves to thrive and the flowers to bloom.

If that’s the cause, you’ll notice that the flowers are hardly blooming or doing so but slower than average.

To fix it, you can add a fertilizer that contains potassium, nitrogen, and phosphorus. Make sure to read its instructions before using it, so you know the right amount to use. You should also only use it sparingly, or the plant will show adverse effects.

If your calla lily’s leaves are curling, it’s probably because of a wrong watering schedule, bad soil, or a pest infestation. Other less common reasons include dormancy, but it also happens when the temperature drops beyond the flowers’ endurance.

In all cases, you should check the flower thoroughly and recognize the reason so that you can fix it. More often than not, the issue is easy to fix.