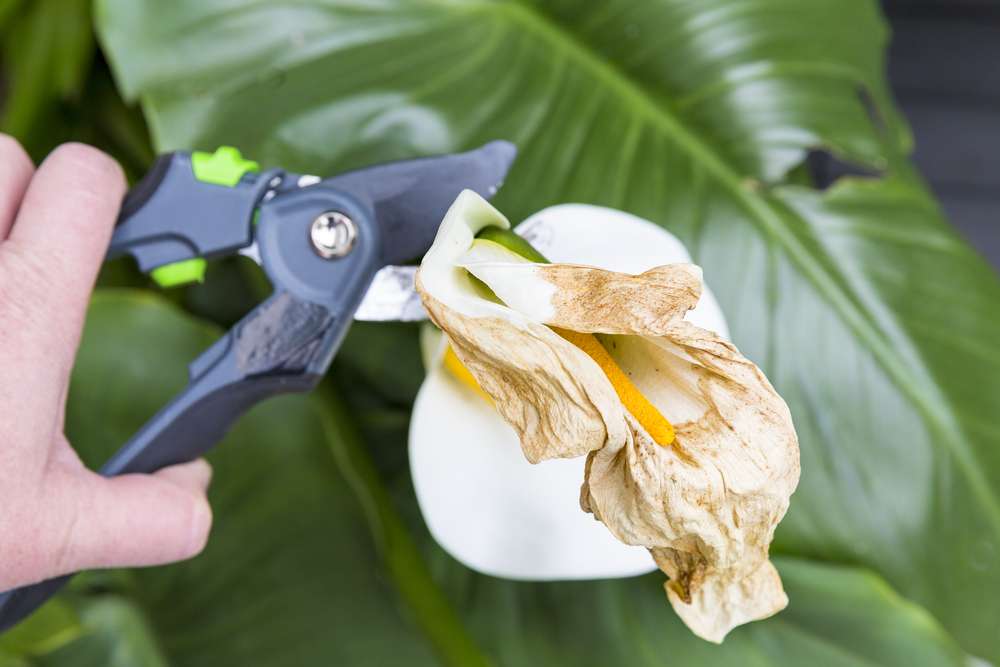 Are your Calla lily flowers turning brown? Calla lilies are popular because of the wide array of vibrant colors that it comes in. They’re suitable for many occasions and just look good. So, after an entire year of growing out your Calla lilies, it can be a letdown when something like that happens to the petals.

The main reason Calla lily flowers turn brown is because of a lack of nutrition in the soil. There are a couple of other reasons like lack of water and some infections.

If you’re asking yourself ‘why are my Calla lily flowers turning brown’, there are a few possible reasons. Let’s take a look at what they could be and what you can do to help your Calla lilies.

Calla lilies have a long and rich history. It dates all the way back to ancient Greece. Calla lilies actually have a little in common with the MilkyWay. In ancient Greece, they believed that both came from the same place.

If you like Greek mythology, then you’re probably aware of the goddess Hera. The Greeks believed that it all started when Hera pushed Hercules off of her while he was trying to breastfeed.

Hera’s breastmilk spilled and created the MilkyWay. And where the milk hit Earth, Calla lilies bloomed.

Other people believed that the origin of the Calla lilies started with a different deity. Venus, the Roman goddess of love and desire, was the most beautiful of the gods. She saw the Calla lily and was green with envy at how beautiful it was. She cursed the lily by placing a large yellow spot right in the middle.

These might be fictional stories, but it explains why the Calla lily holds so much significance to this day. Beyond its magical start, Calla lilies are also some of the most vibrant flowers.

Even though they only grow a single petal, they still remain one of the most popular flowers in the world today.

The name Calla lily also has a little history behind it. Calla means beautiful in Greek. And, even though we call them lilies, Calla lilies don’t belong to the lily family. They have a similarly shaped petal, but that’s about it.

Calla lilies only bloom for a short while, so it can be a real shame when you notice that one of your blooms turned brown.

There are a few different reasons why your Calla lily flower could turn brown.

As with any living being, Calla lilies go through a natural life cycle. They start as seeds in the soil, then they grow into these tall, beautiful flowers.

Calla lilies start blooming at the end of summer, and a few weeks later, the bloom will wilt. The bloom will slowly lose its shape and color until it eventually turns brown.

Depending on the type of Calla lily you’re growing, the life cycle will be a little different. Some Calla lilies start incredibly bright and only turn brown after the bloom has died. Others don’t turn brown at all, they simply just wilt off.

Like many plants, Calla lilies love the sunlight. They like to be in direct full sunlight as much as possible. Calla lilies use sunlight to make food. So, when there isn’t enough sunlight, the Calla lily won’t be able to grow properly.

Calla lilies also prefer moist soil. The soil has to be damp all year round to accommodate the lily. One of the most common reasons why plants brown is that they don’t get enough water.

Water helps keep the plant turgid and strong. Without enough water, the Calla lily will wilt and brown, no matter how much sunlight it’s getting.

Another important factor when looking at the soil is its composition. Soil isn’t just fancy dirt. It’s full of nutrients and vitamins to help the plants grow. Sometimes when one of the nutrients is missing, the Calla lily won’t be able to grow well.

Soft rot is a bacterial infection caused by E. carotovora. The infection will start at the bottom of the flower and work its way up the leaves and stem.

E. carotovora live in the soil and can survive for years without a host. They lay dormant and wait for a host to come along to activate them. As soon as the bacteria find a host, they multiply and start spreading.

Once the infection takes hold, the leaves will turn yellow and the flower brown. Basically, what’s happening is, the bacteria take over the Calla lily’s cells and break them down from the inside.

The cells become weaker, soft, and mushy. This disrupts the normal feeding routes inside the plant. So, not only will the flower turn brown, but the growth of the Calla lily will slow down.

It’s usually easy to spot the infection because of the severe discoloration and how slimy the lily will get.

How to Keep Your Calla Lilies Healthy

Calla lilies are resilient flowers and can grow in tough environments. But, to make sure you’re getting the healthiest lilies, you have to meet a few conditions:

Unfortunately, once a plant gets infected, there isn’t much you can do. You have to dig out the Calla lily down to the roots, to avoid the infection from spreading to other plants. Don’t use the infected lily as fertilizer or compost.

It’s also a good idea to take out all the soil and replace it with a new fresh batch.

Adding Nutrients to the Soil

When planting new Calla lilies, you should choose the soil carefully. You can get pre-packaged soil at your local supplies store. The soil comes with all sorts of nutrients to help your Calla lilies grow.

But, if you have a large flower bed and you don’t want to dig it all out, you can add nutrients. There are many types of vitamin sprays that you can buy to infuse into the soil.

Be careful not to overuse the vitamins. Too many vitamins in the soil can have the opposite effect and kill your Calla lily.

The best temperature for Calla lilies to grow is 60 to 80 degrees Fahrenheit. They need to bask in the warmth of the sun to grow properly.

Calla lilies also like high humidity. They can grow without it, but they grow much weaker and more fragile.

If you’re growing your Calla lilies indoors, that means you need to find a large window to set it by. You also need to turn up your thermostat to about 70℉.

For Calla lilies growing in a flower bed, you don’t need to do much. You just have to water them daily to stop them from drying out. But, during the winter, you might need to dig up your Calla lilies.

In the extreme cold, the part of the Calla lily that you plant, rhizome, can freeze, can die. So you can move your lilies indoors for winter and take them back out when it warms up.

Calla lilies are one of the most popular house flowers. They come in many bright colors and are easy to grow.

The only issue with Calla lilies is that they only bloom once a year for a few weeks. It can be annoying when you don’t get to enjoy the pretty colors. Especially if they start turning brown prematurely.

Many things cause Calla lily flowers to turn brown. The most common ones have to do with nutrition and water intake.

In some rare cases, the lily will turn brown because of bacterial soft rot. If that happens, get rid of the flower immediately.