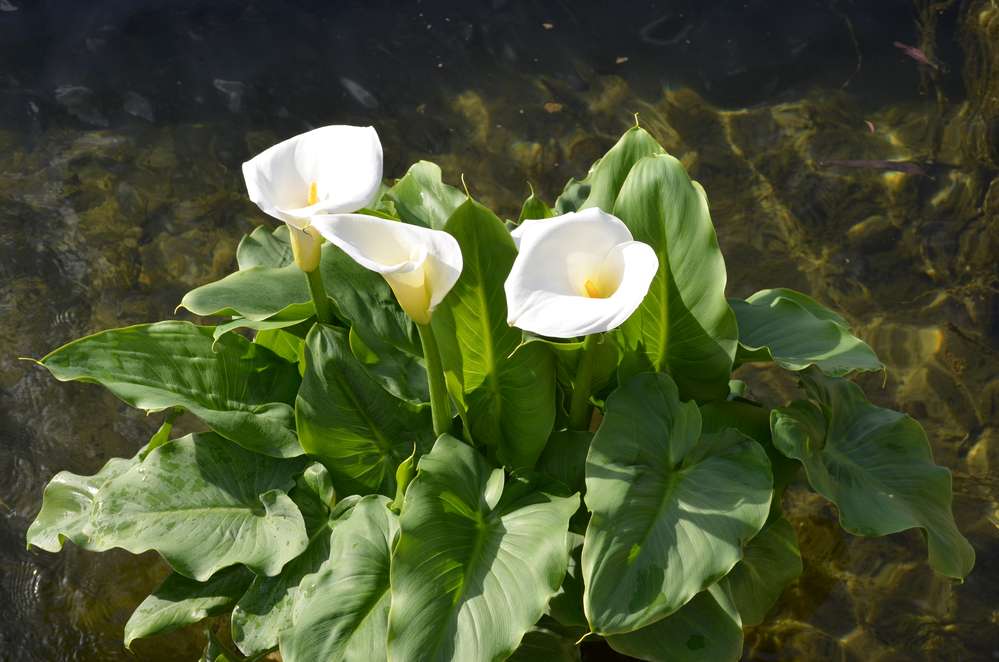 Wild calla lilies differ from those kept in vases and pots. So, if you’re planning to care for the calla lily as houseplant, there are several factors you need to keep in mind—all of which we’ll discuss today.

Luckily, the calla lily is relatively easy to care for. As long as you water them regularly and place them under sufficient light, they’ll grow happy and healthy indoors.

This article discusses everything you need to know about this plant, including the plant’s history, toxicity, and how to care for the calla lily as a houseplant. Let’s dive right in!

Calla lilies were first depicted in a 1664 illustration of the Royal Garden of Paris, but it wasn’t until the 18th century that it was first cataloged by Swedish botanist Carolus Linnaeu. Astonished by their beauty, he called them calla lilies, derived from kallos, the Ancient Greek term for beauty.

However, what he didn’t realize was that calla lilies aren’t lilies at all. In fact, they actually belong to the monocotyledonous flowering family Araceae, in which flowers are born on a type of inflorescence called a spadix.

German botanist Karl Koch made an effort to correct this mistake and reclassified the flowers in the genus Zantedeschia, but the damage was done. The name calla lily was stuck.

By the 20th century, calla lilies have grown increasingly popular in the US. They were used in weddings, anniversaries, and romantic bouquets. Since calla lilies also symbolized rebirth and resurrection, they were also used in funeral arrangements and expressions of sympathy.

Today, the tradition persists. Calla lilies are among the most recognizable flowers as they’re often depicted in art, books, movies, and so on. They’re now a part of American history.

Although calla lilies were officially documented in the 18th century, the history of these flowers goes way back.

According to the legend, Zeus brought Hercules, who was birthed by a mortal woman, to his wife Hera while she was asleep to drink her milk.

When Hera woke up, she was so startled that she pushed Hercules away from her. Upon doing so, several drops of her milk flew across the sky, creating the vast milky way. The two drops that fell on the ground bloomed into calla lilies.

The mythos goes into deeper detail after that. At some point, the goddess of love, Venus, found the calla lilies and grew jealous of their beauty. She was so jealous that she cursed their beauty and placed a large yellow pistil in the middle of the flowers in an attempt to turn them ugly.

Because of their relation to Venus, calla lilies are often associated with lust and sexuality.

We’ve established that calla lilies aren’t lilies at all. But their deception doesn’t end there. The trumpet-shaped structures that sit atop the stems aren’t actually flowers but modified leaves called spathes.

When you look inside the spathe, you’ll notice it protecting a single yellow, 3-inch finger-like spike. Surprise—this inconspicuous yellow pistil, the very same that Vera supposedly added in a fit of jealousy, is actually the flower’s, well, flower!

Calla lilies mostly come in white, but they also grow in a variety of other colors such as coral, orange, purple, yellow, and even black. The symbolism for each color is as follows:

Calla lilies are extremely toxic to pets and humans. They contain insoluble calcium oxalate crystals that cause pain, swelling, vomiting, and difficulty swallowing when ingested. The yellow flower in the middle causes skin irritation and swelling when touched.

Caring for a Calla Lily Houseplant

Calla lilies are fairly easy to take care of as houseplants. They don’t require a lot of attention; as long as they’re placed in a proper location and given enough sustenance, they’ll live long, happy lives.

As with most tropical plants, calla lilies thrive in warm environments, requiring a minimum temperature of 60°F to survive.

Their ideal temperature is anywhere between 65 to 80°F. If the temperature in your home is too high, use mulch to keep them cool in their pots.

To keep your calla lilies blooming year-round, place them in rich, well-draining soil. Ideally, use peat moss-based potting soil that’s well aerated and drains quickly. If the soil seems a bit too heavy or clay-like, add builder’s sand or perlite.

Use bulb fertilizer once a month until your plant starts blooming. Just make sure you’re not over-fertilizing your plants as doing so may harm them.

If your calla lilies have dark tips, this might be a sign that you’re reapplying too much fertilizer.

Calla lilies are water-loving plants. In the wild, they grow near ponds and mud.

Replicate their natural environment by keeping their soil moist. Water the plant regularly, especially during summer, but no more than three to four times a week. Indoor calla lilies dry out faster than outdoor calla lilies, so make sure they’re sufficiently watered.

With that said, don’t overwater your calla lilies, especially after planting them. Never let water collect in the pot or let your calla lilies sit in soggy soil. If you do, they may die from root rot.

If the tips of your plants are dark, this might be an indication that you’re overwatering them. Cut back on the water and let your plant recover.

Because of their toxic nature, calla lilies aren’t susceptible to pests. However, they’re vulnerable to fungal diseases leading to rhizome rot.

Avoid rhizome rot by using well-draining soil and adding just the right amount of water to keep it moist.

Remove plant debris and excess mulch from the area to maintain good air circulation around the plants.

Trim off diseased or dead foliage with a pair of clean pruning shears and dispose of the cuttings. Before moving on to another plant, clean the shears with isopropyl alcohol to prevent reinfection.

Yellowing or browning of leaf margins is one of the first signs of fungal infection. If the plant looks relatively healthy (no soft roots, falling leaves, etc.), spray the infected plant with multipurpose fungicide spray once a week until the signs of infection disappear.

When deadheading calla lilies, wear gloves to avoid contact with the irritating sap. Remove the dead flowers with a pair of disinfected pruning shears. If you don’t have pruning shears, simply pinch the stems just below the base with your fingertips.

Although not considered lilies, calla lilies are just as graceful and exotic. They’re relatively easy to take care of, making them a good choice for beginner botanists and plantsmen.

Do keep in mind that calla lilies are toxic when touched and consumed. As such, gloves are recommended when handling calla lilies. If you have a pet that tends to munch on houseplants, it’s best to skip this plant for the safety of your pet.