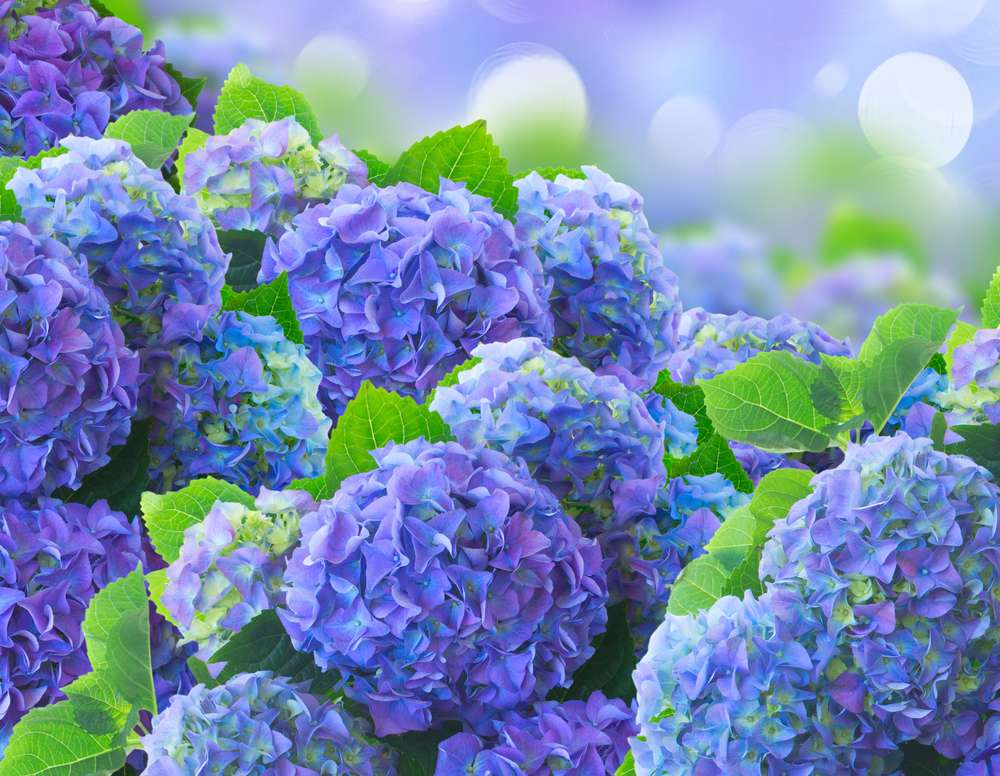 There are multiple interpretations of blue hydrangea meaning, ranging from apology, remorse, understanding, and gratitude; to vanity, disinterest, and apathy. Please read on for a detailed examination of these and other important facts about the blue hydrangea.

Hydrangea, also known as “hortensia”, is the name of a huge genus of flowers that contain 75 different species of plants that belong to a family of the same name “Hydrangeaceae”.

These plants originated in several areas around the world, including Europe and Asia, especially Japan, China, and Korea.

The American pronunciation of the Hydrangea is [hai · dran · juh]. This word is derived from the Latin language where the word “hydro” means “water” and the word “angeion” means “vessel”.

The nomenclature of the flower comes from the shape of its seed capsule, which looks like cups that were used for drinking water.

The flower is known for its pompous shape and variety of colors. However, the colored part of the hydrangea is actually the flower sepals and not the petals like most other flowers.

Interestingly, some species of the hydrangea flower will grow with different colors depending on the level of the soil’s pH, especially bigleaf hydrangea.

The flower is also slightly toxic, as the leaves of the flower contain a glycoside compound known as “amygdalin”, which produces hydrogen cyanide, so they should be handled with care.

What Does Blue Hydrangea Mean?

When it comes to meanings and symbolism, the blue hydrangea is a strange specimen. As you’re going to see in the list below, the flower has many positive connotations but also various negative ones, so let’s explain these meanings and why they’re so contradicting:

One of the most popular meanings of blue hydrangea nowadays is apology and remorse. This meaning is derived from an old Japanese Legend about an Emperor and the girl he loves.

The story goes that the Emperor of Japan, who was in love with a girl, became so busy with his duties as a ruler of the empire, and as a result, he neglected his beloved for quite some time.

In order to make amends for his negligence, the Emperor sent a gift of blue hydrangeas to the girl and her family.

This move made a lasting impression on the whole empire, and since then, the flower became a symbol of apology and remorse.

Interpreted from another point of view, the previously mentioned story also made the hydrangea a symbol of gratitude and understanding.

In fact, hydrangea represents the abundance of all these sentiments around the world, especially in the east.

The meaning of abundance here comes from the nature of the flower and how it has so many leaves and sepals, which is also interpreted as a symbol of generosity.

Another meaning that is also based on the story of the Japanese emperor is genuine emotions toward your loved ones.

When you send someone blue hydrangeas along with a letter that carries how you feel about them, it is a hidden message that you feel toward them is genuine and true to the heart.

The color blue is quite rare in nature, and therefore, it has always been linked to its uniqueness and being special.

This shouldn’t be confused with the purple color, which is also used as a symbol of uniqueness, nobility, and royalty.

However, the purple color is used as a symbol of wealth because of how difficult it was to make purple dyes.

On the other hand, making blue dyes are rather easy, so it has a more spiritual uniqueness when compared to purple’s materialistic one.

Apathy and Disinterest in Relationships

One of the negative meanings that are associated with blue hydrangea is apathy and heartlessness.

Unlike the previously mentioned meanings, this one is associated with Europe, especially a few centuries back.

For that reason, those who have been rejected by their loved ones would send them blue hydrangeas as a symbol of their apathy and cold heart.

Similarly, it was also said that if someone sends a blue hydrangea after a proposal, it means that they are not interested in having a romantic relationship with the other person,.which made the flower a sign of rejection.

Another negative meaning that is associated with hydrangeas in general dates back to the Victorian era.

According to beliefs at the time, hydrangeas were a pompous plant that has so many flowers and a lot fewer seeds. This was a symbol of bragging with nothing to show for it, earning the flower a bad reputation at the time.

What Do Other Colors of Hydrangea Flower Mean?

Although blue is one of the most popular colors of the hydrangea flower, it also exists in several other shades and hues that may have slightly different interpretations. Let’s have a quick look at them:

Like the blue one, pink hydrangea often represents the sincerity of someone’s emotions, but it can also represent romance, love, and friendliness.

Like most white colored flowers, white hydrangea is considered a symbol of purity and grace, so they’re often used in wedding receptions. However, they were also seen as a sign of boasting and bragging.

Purple hydrangea is relatively rare but extremely beautiful and attractive. It is looked at as a sign of royalty and wealth. However, it’s also interpreted as a symbol of understanding in different cultures.

What Is the Significance of Hydrangea Flower in Other Cultures?

As a flower that grows in several spots around the world, it’s no surprise that the significance of the hydrangea flower can vary significantly from one culture to another.

For example, hydrangeas in western cultures are a popular symbol of apology and regret. However, this is actually derived from the symbolism of hydrangeas flowers in the east.

As previously established, in Japan, the flower represented the emperor’s remorse and apology after neglecting the girl he loved in favor of his royal duties. Hydrangea is also fermented and used as a herbal tea in Japan, which is used to celebrate the birth of Buddha.

On the other hand, most of the negative sentiments associated with the flower originated in Europe, especially in the Victorian era (the early 1800s).

Despite the beauty of the flower, hydrangea was associated with bragging and boasting because of their pompous flowers while lacking seeds, which symbolizes vanity.

This is why the flower’s meaning was also associated with rejection, cold-heartedness, and boastfulness, which is why it was rarely used as a gift in those times.

What Are the Best Occasions to Use the Hydrangea Flower?

As you now know, there’s a huge range of meanings that are attributed to the hydrangea flower, whether it’s blue or any other color. For that reason, you have to be careful when using the flowers as a gift because they could be interpreted the wrong way.

Generally, the best use for hydrangea flowers is for decorative purposes. Blue hydrangea represents the uniqueness of the color blue in nature.

The color blue is also a symbol of spiritualism and understanding, so it’s considered a welcoming sign to your home. Additionally, you may also use a lovely bouquet of hydrangeas as a birthday gift.

While some flowers will work much better than hydrangeas as a gift, they are a wonderful present to anyone who’s born between October 31 to November 22. The reason behind this is that hydrangea is the birth flower of anyone in a Libra zodiac sign.

Keep in mind that hydrangea flowers are slightly toxic, so make sure that you’re gifting them to someone who knows how to deal with flowers and take good care of them.

Blue hydrangeas are among the most impressive flowers out there, and when it comes to symbolism and meanings, the flower has a wide range of meanings.

Some of these meanings are positive while others are negative, so you have to be careful when to use them, so you don’t end up sending the wrong message.

Blue hydrangea can be a symbol of apology, remorse, heartfelt emotions, and gratitude, but it can also represent vanity, braggings, frigidity, and disinterest.

With that said, you can still use them as a pretty addition to your garden and floral arrangement to enjoy the unique blue color without worrying to display uniqueness.