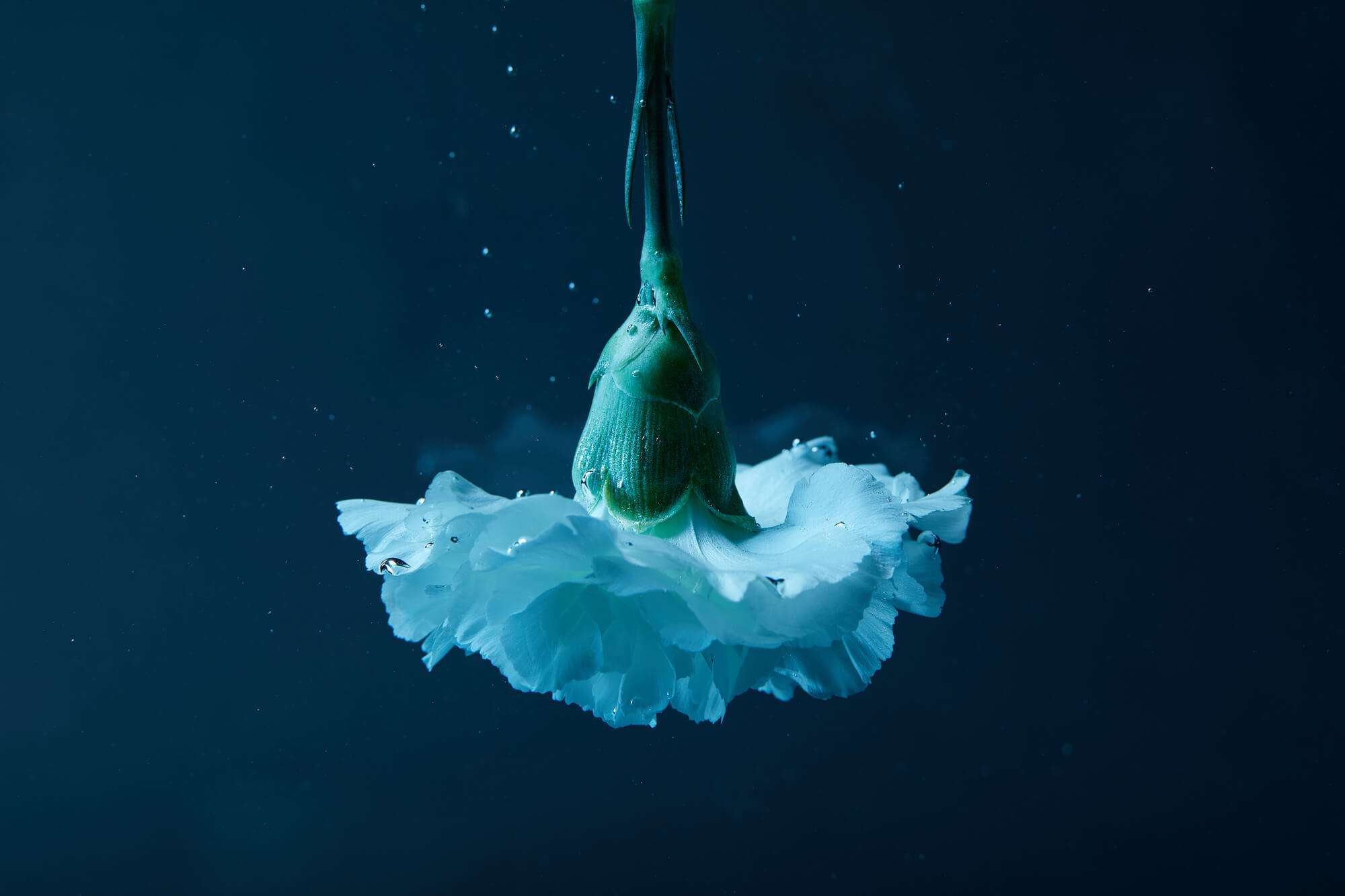 Long ago, before gifts consisted of smart gadgets or toys, in simpler times, flowers were more widely exchanged. Not only were they gifts, but symbols and means of communicating emotions and thoughts.

One of these flowers was the carnation. This type of flower can be traced back to 2000 years ago. The carnation we’ll be discussing is blue.

Blue isn’t a commonly found color in the animal and plant kingdom. It’s so rare, that only one in ten plants have natural blue hues. One of those plants is the blue carnation.

Blue carnation meaning mainly comes from its mesmerizing color. It can signify tranquility, peace, and spirituality.

Stick around to learn more about blue carnations, their meaning, and how you can care for them as houseplants.

Origins of the Blue Carnation

If you’re expecting a long-drawn history lesson about the origins of this flower, then you might want to try a different one like the white lotus. Blue carnations are man-made. The first ones made were in the 1970s.

It wasn’t a natural growth process. A carnation was submerged in blue food coloring. Nevertheless, it wasn’t until 1997 that a true blue carnation was genetically engineered by a dozen Australian scientists.

Even though the color appeared with a violet tinge, it was still considered blue and later named, “Moondust.”

You might be wondering, “how did these scientists make blue carnations?” Well, it’s all got to do with looking at other plant genera.

The Australian scientists researched the naturally occurring gene that gives petunias their blue color. After they extracted that gene, their main objective was to pass it on to carnations.

The scientists were successful in transferring the gene and creating five variations of the blue carnation with different tints.

That being said, it’s worth noting that they weren’t actually intending on creating blue carnations in the first place. They originally wanted to genetically engineer blue roses. That proved difficult because roses have a highly complex genetic makeup.

Carnations, on the other hand, were a simpler breed to genetically tamper with. Now, if you’re looking for a more naturally occurring carnation, you could check out white, pink, and red carnations instead.

Carnation holds valuable etymological significance since it comes from several language derivatives. In Latin, carnation comes from the term, “corona-ae,” otherwise referred to as a crown, chaplet, or garland.

Another Latin background theorizes that carnation is derived from the word “caro,” meaning “flesh.” This could be pertaining to the flower’s color. Another Latin translation could be “incarnatio,” which signals the Christian depiction of God’s incarnation in the flesh.

Carnation also has a french etymological background since the term is translated to “carnation,” which roughly means pinkness or color of human complexion.

The word carnation is also linked to coronation which involves a celebration of power and wearing a crown.

What Do Blue Carnations Symbolize?

Seeing blue can naturally make you feel calmer, which is why it’s no surprise that blue carnations symbolize peace and tranquility.

The sky and ocean are blue and are associated with serenity and peace. Blue carnations evoke a similar feel and may provide your home with a stress-free environment.

Although red is everyone’s go-to color when it comes to love and romance, blue can also showcase love. Several wedding themes involve the blue color. Adding blue carnations to a centerpiece will signify the will to commit.

On the other hand, red carnations may signal lesser commitment, but more sensuality and passion. That being said, blue isn’t restricted to romantic love. Blue carnations can express adoration towards friends and family as well.

Apart from love and peace, blue carnations are also associated with spirituality. In religions such as Islam and Judaism, blue is sacred and depicts heaven and holiness, respectively.

Blue carnations also give off creativity and originality due to their rarity in nature. You may choose to gift these gorgeous flowers to an artistic friend. It’ll send them a message saying that they’re truly one of a kind.

The calming color also holds some form of mystery. You can give blue carnations to those you believe to be mysterious and eccentric.

What Do Different Colored Carnations Mean?

Carnations come in a wide array of colors other than blue. These colors are more natural and commonly found as well. Here are some of them below and what each of them means as a gift.

Pink is probably the most popular carnation color of the bunch. Like most pink flowers, they symbolize gratitude, especially for a mother’s love.

You can gift pink carnations to your mother for Mother’s Day or even to your teacher to show some appreciation. Grenadine Pink and Chomley Farran are wonderful pink carnation varieties you can choose from.

Red is the color of love and adoration. You can’t go wrong with red carnations for a display of romantic affection. Deep red carnations are perfect to showcase your equally deep love for your significant other.

Meanwhile, light red carnations deliver a softer message of admiration. There are multiple red carnation varieties available in the market such as Laced Romeo, Garden Spice Red, and King of the Blacks.

White carnations signify good fortune and purity. These beauties look like little ruffled wedding dresses, which makes them a perfect addition to a bridal bouquet.

You can gift white carnations to your grandmother or grandfather as a way to wish them a prosperous life. One of the most long-lasting variations you can pick out is Floristan White.

Although the color purple stands for royalty, nobility, and even a bit of spirituality, purple carnations are different in their meaning. Instead, they portray fickleness, instability, or irregularity.

This makes you wonder, “Who should I gift them to?” Well, you can pick purple carnations for those adventurous people in your life. In other words, you can gift them to those who have wild personalities and are off on one of their many daring journeys.

Typically, yellow flowers are usually given to close friends to provide them joy. Nevertheless, the same can’t be said for yellow carnations.

These flowers are given to express remorse and apology since they represent rejection and disappointment. If you want to say sorry to a friend, you can choose from the Clarion or Golden Sun variations.

How to Care for Blue Carnations

Blue carnations would make an exquisite addition to your home. Having said that, it may be hard to get your hands on their seeds. Instead, you might be able to purchase some natural cut ones.

Luckily, carnations are generally hardy flowers and easy to care for. You’ll want to keep their soil moist, but avoid overwatering them to prevent any root rot.

Feeding-wise, carnations tend to get hungry for lots of fertilizer to supplement their large blooms. Organic fertilizer is usually the best option for these flowers. The most ideal time to apply fertilizer is during late winter and early spring right before their growth stage.

Carnations prefer direct sun. Try to at least provide the flowers with around six hours of sun exposure. If the heat is too much, then try to keep it in indirect light so the blue petals don’t dry up and brown.

Blue carnation meaning doesn’t carry as much historic depth as other flowers like anthuriums or roses. Instead, these types of carnations are made in a lab through genetic cross-breeding. That doesn’t mean that it loses significance in its symbolism.

Carnations alone have a rich history in Christian, Korean, and Chinese culture. Blue carnations carry more meaning from their unnatural hue. Blue is associated with peace, serenity, commitment, and love of all kinds.

The exotic flowers can be gifted to friends, family, and loved ones on several special occasions. Additionally, they can add a pop of color to your living room.