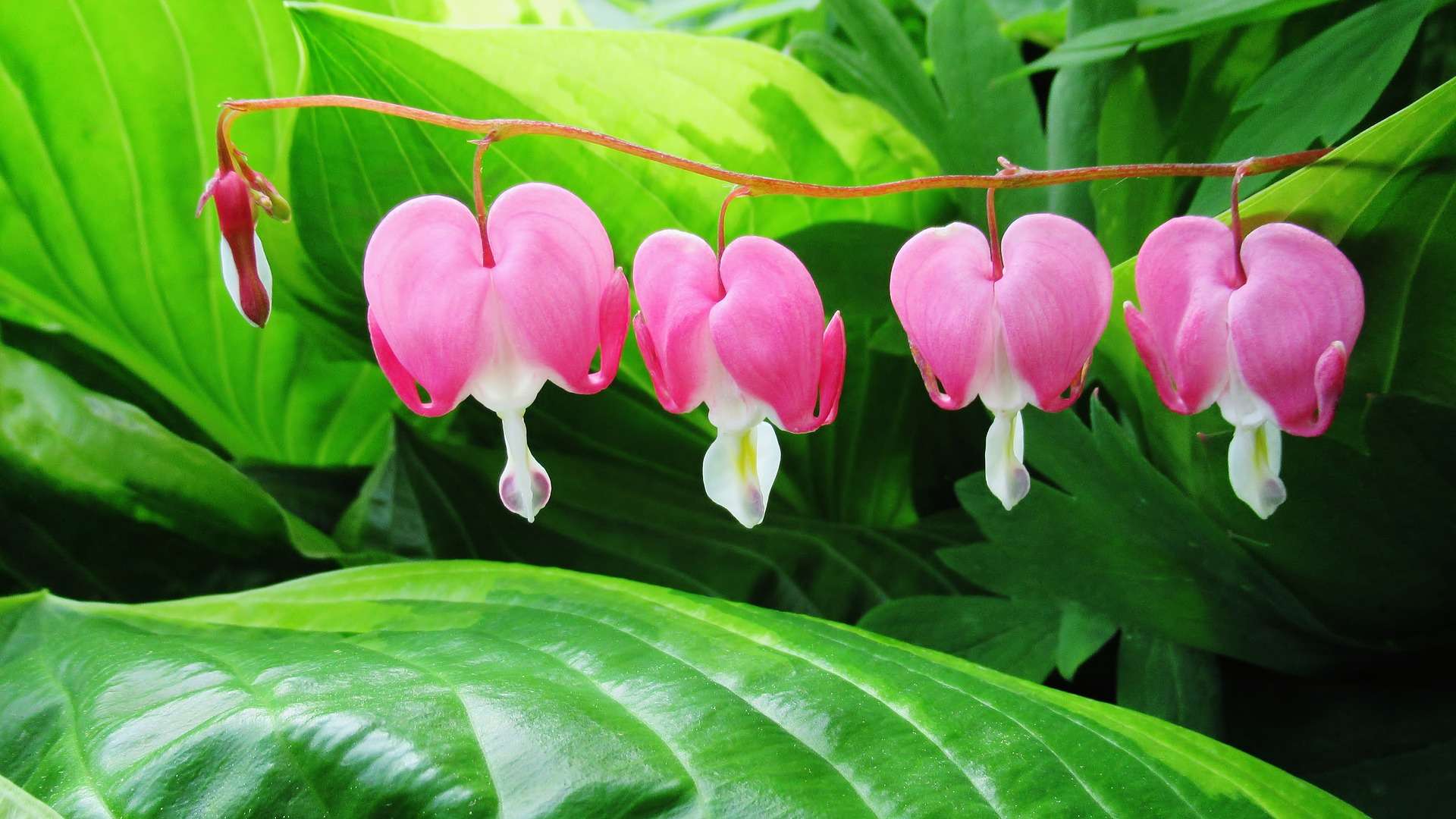 In this article, we’ll explore common Bleeding Heart plant diseases, as well as their symptoms and cures. We also provide you with some tips on how to avoid such diseases in the future, so be sure to stick around!

Bleeding Hearts are prone to fungal diseases common to shady plants, including:

Powdery mildews, which are caused by a variety of fungal species, are one of the most common diseases that affect plants, including Bleeding Hearts.

As the name implies, powdery mildew leaves dusty splotches of white, black, pink, or gray talcum-like powder on the leaves, stems, and occasionally flowers of the infected plant.

The most visible sign of powdery mildew is a splotchy, often white dusting on the upper side of the leaves.

Typically, the disease begins on the underside of the leaves and spreads to the upper side, the stems, and even flower buds.

That said, in the disease’s early stages, Bleeding Hearts may show little to no signs of an infection. Even if they do, the fungal growth may be sparse and difficult to detect.

If left untreated, powdery mildew can distort the plant’s buds or stunt the leaves, causing them to fall off.

The good news is that, while powdery mildew is unsightly, it’s rarely life-threatening.

The best way to treat powdery mildew is to remove and destroy all infected plants. However, unless the Bleeding Heart is severely infected, any gardener or plant enthusiast may find this solution too drastic.

Fortunately, there are better alternatives that can keep pesky fungi at bay.

This solution won’t cure powdery mildew, but it’ll mitigate the spread of the disease to other parts of the Bleeding Heart.

Using pruning shears, remove any Bleeding Heart parts that have even a spore of powdery mildew on them.

Then, dispose of the pruned bits, wash your hands, and use alcohol to clean the shears as well as anything else the fungus-ridden bits touched.

To avoid spreading the infection, don’t touch the fungus-free parts of the plant with gloved hands or shears.

Leaf spot is an umbrella term for a group of fungal and bacterial pathogens that cause black spots on the plant foliage.

Small irregular black or brown spots on the leaves are usually the first sign of Bleeding Heart leaf spot. They often start on the lower and inner branches, where humidity and shade are highest.

These spots grow larger over time, surrounded by a yellow halo. As they grow, their center begins to decay.

Eventually, the infected leaves perish, and they either fall off or remain attached to the twig.

While it’s not common, fungal pathogens can affect other parts of the plant. If you suspect that your Bleeding Heart has leaf spot, you should look for any dead twigs, where the fungi may still be present.

The most effective solution is to remove and dispose of any infected leaves, twigs, and fallen leaves. This way you can get rid of any spores that may reinfect healthy leaves and twigs.

Follow the same steps as with powdery mildew to avoid reinfection when removing affected leaves and twigs.

There are currently no specific fungicides that can eradicate either of the fungal species that cause Bleeding Heart leaf spot.

That said, fungicides such as tebuconazole and triticonazole can be used to control the spread of leaf spot on your plant.

Just make sure to follow the product’s instructions to avoid causing any harm to the plant.

Several species of the genus Pythium cause root rot in Bleeding Hearts. Root rot is potentially fatal to Bleeding Hearts, as well as any other plant. If not treated promptly, it can spread to other plants that share the same soil as the infected one.

Pythium root rot begins by wilting and stunting the growth of the Bleeding Heart. Then, the roots start to rot and blacken.

Yellowing, blackened, or brownish leaves are common signs of a rotting plant. It may also emit an acrid odor similar to sulfur or rotten eggs.

The first step is to assess the gravity of the situation. Begin by removing the Bleeding Heart from the soil and wash off any soil stuck to the roots.

Examine the roots carefully: if the entire root system is black and mushy, you should consider discarding the entire plant because it can’t be saved.

On the other hand, if there are still some white, firm roots, you should cut off the rotten parts with shears. Leave nothing to chance, as one Pythium spore is enough to reinfect the plant.

Root rot, in general, is highly contagious, so you should dispose of the potting soil that the infected plant was in. Next, wash the pot and shears with alcohol to disinfect it from any fungal spores.

Fill the clean pot with new potting soil and replant the Bleeding Heart. You can prune some leaves so that the remaining roots aren’t overburdened.

Fusarium Wilt is a disease caused by the soil-borne fungus Fusarium oxysporum, which enters Bleeding Hearts via their roots.

This fungus clogs the tissue responsible for transporting water and nutrients from the stems to the leaves, rendering the plant ineffective.

Fusarium-infected Bleeding Hearts will start to wilt from the bottom to the top, no matter how much you water them. The leaves will also turn yellow in the same manner.

As the infection spreads, the wilted leaves will eventually dry out and fall off.

What’s more, if you were to cut open an infected stem vertically, you’ll find dark streaks where the fungus has taken over the tissues.

Unfortunately, once a plant is infected with this fungus, there isn’t much that can be done. What you should do is dispose of the infected plant, any neighboring plant, and their soil in a safe manner.

How to Prevent Bleeding Heart Diseases

Bleeding Heart diseases are often avoidable if plants are properly cared for.

Here’s what you can do:

The best way to avoid fungal diseases in Bleeding Hearts is to grow and care for them properly. This means that you need to:

Once every seven to 14 days, thoroughly spray your Bleeding Heart plant with a store-bought or homemade fungicide.

Following this routine ensures that any fungal or bacterial spores are removed early on before the entire plant becomes infected.

For homemade fungicides, you can make a baking soda spray or milk spray. You can also coat the leaves with a layer of neem oil, which can also protect your plant from pests.

Even though healthy Bleeding Hearts don’t get sick very often, they can become infected with a variety of fungal pathogens that can be fatal in some cases.

In most cases, a pathogen will find its way to a Bleeding Heart if the plant isn’t properly cared for. That’s why you should water it adequately, aerate the soil, and ensure that the plant doesn’t stay damp for too long.

Most importantly, keep an eye out for any signs of discoloration or unusual growth on the undersides of the leaves on a regular basis. That’s how you catch the infection early on and treat the Bleeding Heart before it suffers any substantial damage.