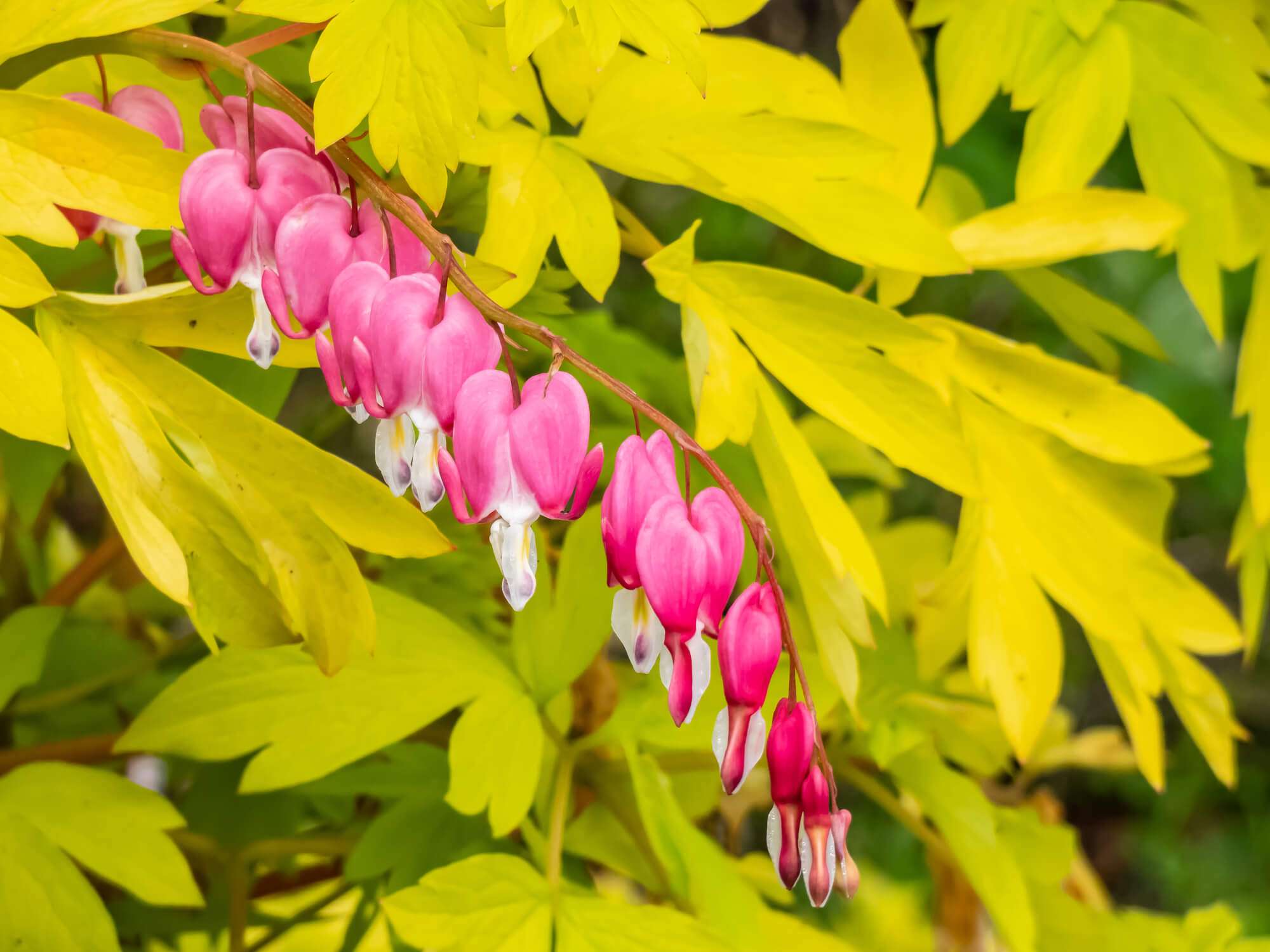 The bleeding heart is one of the most beautiful plants you can add to your garden with its captivating flowers, unique shape, and bright colors. Unfortunately, bleeding heart leaves turning yellow is a common problem associated with the plant, so why does it happen?

In today’s article, I will explain all the possible causes for your bleeding heart leaves turning yellow along with the best way to deal with each issue. Let’s jump in!

During the second and third months of summer, the bleeding heart plant goes through a period of dormancy where its leaves turn yellow and shriveled. This is a normal phenomenon and the leaves should grow back green and healthy around late winter or early spring.

Exposing the plant to too much heat or lighting is a common cause of bleeding heart leaves turning yellow.

Your bleeding heart may be placed under direct sunlight or it may be parked in a spot that seems to be getting some shade but it’s not enough. In this case, your best bet is to change the location of the plant and observe if that helps.

Shade may not be enough to fix the problem if the ambient temperature around the plant is too high. The ideal temperature necessary for a bleeding heart to thrive ranges between 50 and 80 degrees Fahrenheit.

Shaded areas are usually about 15 degrees lower in temperature than direct sunlight. So if you place the plant in such a spot within the acceptable temperature range, it shouldn’t demonstrate any yellowing issues.

However, if the shaded area is higher in temperature than recommended, your bleeding heart will suffer.

As a rule of thumb, keep your plant in full shade if you live in hardiness zones 7 to 9. If you’re staying somewhere across zones 3 to 6, partial shade should be enough to maintain your leaves green.

One of the most common reasons for bleeding heart leaves turning yellow is improper watering. You could be giving your plant either too much or too little water where each practice presents its own set of issues that ultimately cause leaves to turn yellow.

Overwatering, by definition, is when you water your plant too frequently. In this case, the plant’s roots don’t get enough time to take up all the introduced water before you add more.

This causes the roots to “drown” in excessive moisture and decreases the efficiency of oxygen delivery down there. As a result, the plant can suffer from root rot, damping off, or fungal diseases that result in wilting, yellowing leaves.

The bleeding heart thrives in moist soil, but not in soggy soil. The plant’s sensitivity to overwatering requires you to regularly check its soil for moisture levels.

You can easily do this using a soil moisture meter or even your fingers by sticking one into the soil until about one inch deep. If the soil feels wet at such depth, postpone watering until it’s dry.

You may also need to adjust the drainage of the soil by mixing in some sand or small pebbles. A poorly-draining soil could be the reason the roots stay immersed in water for too long.

If you keep your bleeding heart in an outdoor garden and there’s been lots of rain or it’s forecasted, you should make holes in the soil to enhance the aeration of the plant’s roots. A stick or a screwdriver can do the trick, but make sure you poke the soil slowly to avoid unsettling the roots if you accidentally hit one.

As a rule of thumb, water your bleeding heart 2 times per week in the summer and once every 2 weeks in the winter.

Just as too frequent watering can lead to bleeding heart leaves turning yellow, insufficient watering can also have a similar side effect. This is especially important to monitor during the summer when the weather’s hot and dry.

The plant receives the necessary nutrients for growing and thriving via water, so when water is low, nutrition is also compromised which causes the leaves to turn limp and yellow.

As we mentioned earlier, you can simply do this using a soil moisture meter or even your fingers by sticking one into the soil until about one inch deep. You want the soil to feel damp at such depth every day.

If the soil feels dry, water it right away but be careful not to overdo it. A reminder on your phone could help you keep up with the proper watering schedule.

The bleeding heart plant thrives in slightly acidic soil, which corresponds to a pH between 6 and 7.

When the pH of the soil is elevated, it becomes alkaline. For bleeding hearts, a pH higher than 7.5 will start to cause pigmentation issues due to the decrease of mineral levels required to produce chlorophyll in the alkaline medium.

Without enough chlorophyll, the leaves will lose their green color and turn yellow. This phenomenon is known as chlorosis.

To avoid this problem, you need to test the soil before planting if possible, or supplement it with the missing minerals if you’ve already planted the bleeding heart.

Some fungal diseases can affect bleeding heart plants and cause symptoms such as the yellowing of leaves. Two of these diseases are:

If so, you’re dealing with fusarium wilt and the infected plant should be disposed of since there’s no treatment. Otherwise, the disease can spread to the surrounding plants.

Aphids are one of the most common pests that can attack bleeding hearts. These insects feed on the plant’s sap, leaving it with insufficient nutrients to sustain healthy growth.

This will cause the leaves to twist and discolor with time, appearing yellow in the majority of cases.

To get rid of aphids, you can spray them with water, treat the plant with neem oil, or apply horticultural soap.

Last but not least, you may not realize that you’ve been growing a variety of bleeding hearts that naturally produce yellow leaves. For example, the “Golden Heart” variety has yellowish foliage instead of the typical green.

As you can tell by now, bleeding heart leaves turning yellow could be the result of several reasons. It could be seasonal dormancy, excessive heat, improper watering, elevated soil pH, fungal diseases, pest infestations, or even the particular variety you’re growing.

Be sure to closely examine the conditions of the plant’s environment and the symptoms accompanying the yellowing of leaves to correctly identify the issue and how to fix it.