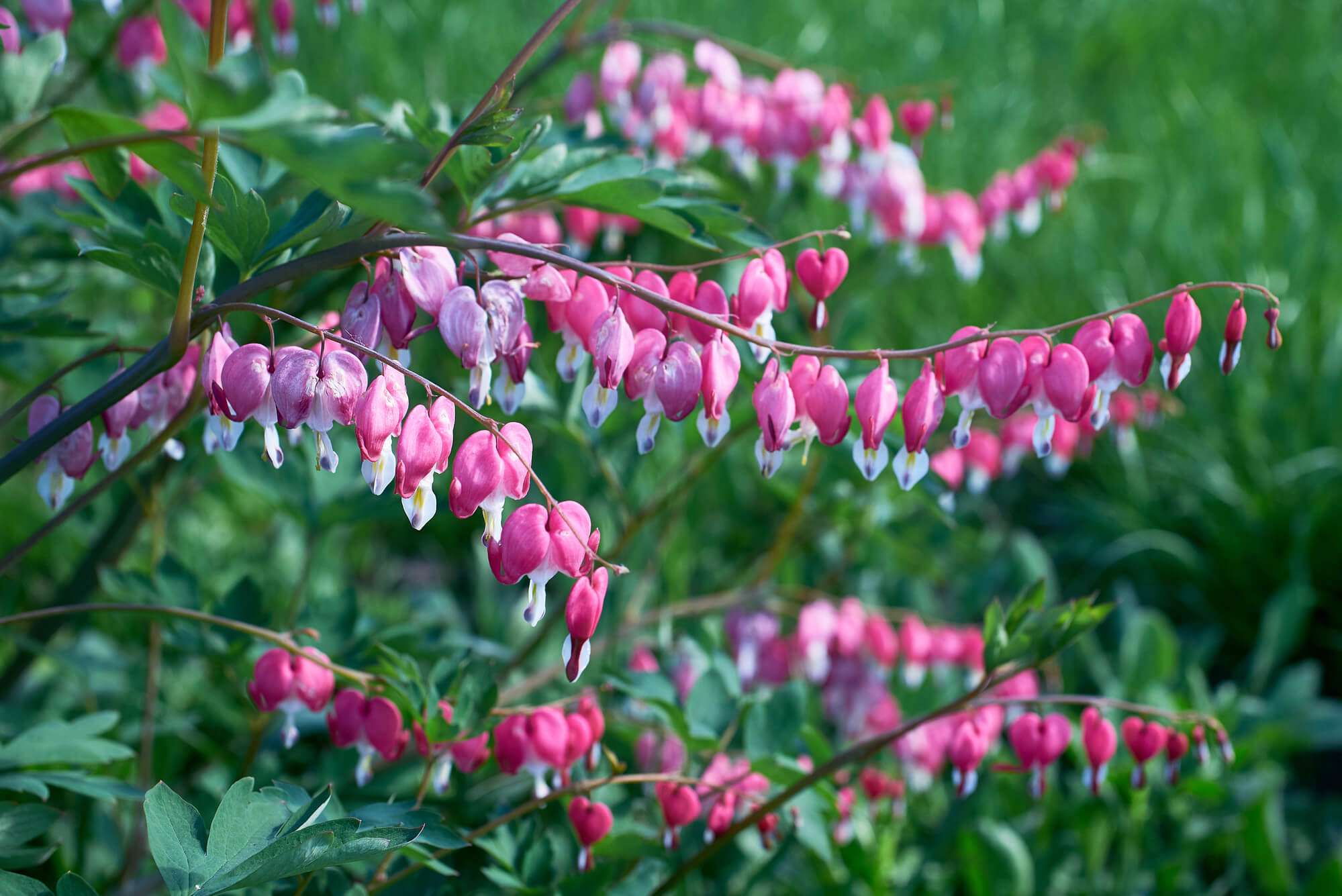 Bleeding hearts are perennial plants that belong to the genus “Dicentra”. These rosy red plants are originally from East Asia and have marvelous heart shaped flowers with dangling white tips. Aside from the beautiful flowers, you may find your bleeding heart leaves curling, so why does this happen?

If you want to know more about factors that cause bleeding heart leaves to curl and wilt, keep on reading this guide!

Powdery mildew is easily one of the most common issues that bleeding heart growers might come across.

This one is actually a fungal infection that is caused by a wide range of fungi species that belong to the Erysiphales family. Not only that, but it also targets a variety of plant species.

When bleeding heart plants suffer from powdery mildew, noticeable patches of dust become visible on the plant, which is one of the easiest signs to tell it apart from any other issue.

These dusty patches can also come in a variety of colors, depending on the species of the fungi, including gray, white, black, and pink.

At first, the powdery patches are the only symptom of the plant. But as the condition worsens, the patches will continue to grow larger until they start stunning the vital processes of the plant, which causes the leaves to curl and shrivel before they die and fall off the plant.

Luckily, it’s easy to manage this fungal infection by spraying conventional antifungals on the plant, such as triadimefon and propiconazole.

As previously discussed, the bleeding heart plant is originally from East Asia. This means that the ideal temperature range for them is between 55 to 75 degrees F (12.7 to 23.8 degrees C), which is relatively cool, although it can tolerate high humidity very well.

Based on these numbers, it’s easy to figure that the plant can’t take excess heat. In fact, when the temperature starts ramping up in the summer, it’s not uncommon for some of the leaves of the plant to become yellow.

This is actually a natural reaction to the temperature and happens because the plant is trying to store extra energy to last them through winter.

However, if you live in an area where temperatures exceed 80 to 85 degrees, the leaves will start curling and drying up in addition to becoming yellow.

Fortunately, this condition isn’t always serious and can easily be managed by downing the following:

Another major factor behind the curling of bleeding heart leaves is a parasitic infestation, particularly aphids.

Aphids belong to a large group of plants targeting insects that are grouped under the Aphidoidea superfamily. These insects feed on the sap produced by plants. Think of them as what mosquitoes are to us.

The insects are extremely tiny, though. This makes them quite difficult to spot when they start attacking a garden. However, you can easily tell the pear-shaped pests are around when they start multiplying in numbers.

When it comes to bleeding heart plants, aphids will pierce through the leaves in order to suck the sap. For that reason, the infected leaves will start yellowing and curling when they’re severely infected.

The first thing you need to do in order to manage the infestation is to remove all the infected leaves to curb the infection and cut the number of aphids.

Next, you’ll need to remove any hidden aphids around the plant, which is easily done by hosing down the plant with some clean water.

Technically, this should be enough to remove and drown all the aphids in the early stages, but if there are too many aphids, you might need to use extra methods to remove them. These methods can be:

We’ve previously established that bleeding heart plants react to high temperatures by yellowing and wilting the plant leaves. Yet, the temperature isn’t the only environmental factor that will cause the curling of the leaves.

Ideally, the bleeding heart plant likes to grow in partial shade. This means that the plant can only be exposed to shades of the afternoon or early morning.

Yet, even if temperatures and humidity are within the ideal ranges when the plant is also exposed to full sunlight, it’ll still show some curling and yellowing as a reaction to avoid getting scorched by the sun.

If you suspect that sunlight exposure is the reason why your plant is curling, you might want to transfer it somewhere with plenty of partial shade.

If the bleeding heart leaves start to twist and curl on one side of the plant, there’s a good chance that the problem is caused by fusarium wilt.

Unfortunately, this is one of the worst case scenarios if your bleeding heart leaves are curling because you may not be able to save the plant, as the damage caused by this disease is invasive and near irreversible.

Fusarium wilt is caused by a species of fungus called “Fusarium oxysporum”, which is transferred by contaminated soils, especially in warmer regions, which is another reason why you need to keep your plant in a relatively cool environment.

In addition to showing twisting and curling on leaves on one side, the insides of all stems will be heavily damaged and rotten, so make sure that you cut a stem and pry it open to check for the signs of the disease.

Once you’re sure that fusarium wilt is the culprit, make sure that you pull the plant off immediately to prevent the fungus from spreading to all nearby plants.

It’s also highly recommended that you burn and dispose of the plant and try to sterilize the soil around the plant.

If your plant is struck with verticillium wilt, it may not look as bad as the fusarium wilt, but unfortunately, the outcome is nearly the same.

Verticillium wilt is also caused by fungi, but different species can cause it, including Verticillium dahliae and Verticillium albo atrum, hence the name.

Unfontantley, using a fungicide to treat this condition yields little to no success, and the only way to manage this infection and prevent it from spreading to other plants is by removing the plant from the soil and discarding it safely.

After removing the plant, make sure that you treat the infected soil with heavy fungicide or sterilize the soil to get rid of the fungi and plant remains.

There you have it, a brief guide that walks you through all the reasons why your bleeding heart leaves are curling or wilting in addition to how to deal with these cases.

Although the problem can arise due to different factors, some of them are more common than others and you can easily distinguish between them by accompanying symptoms.

The good news is that monitoring the health of your plants and checking the leaves often will help you spot any problem when it’s still manageable and curable!