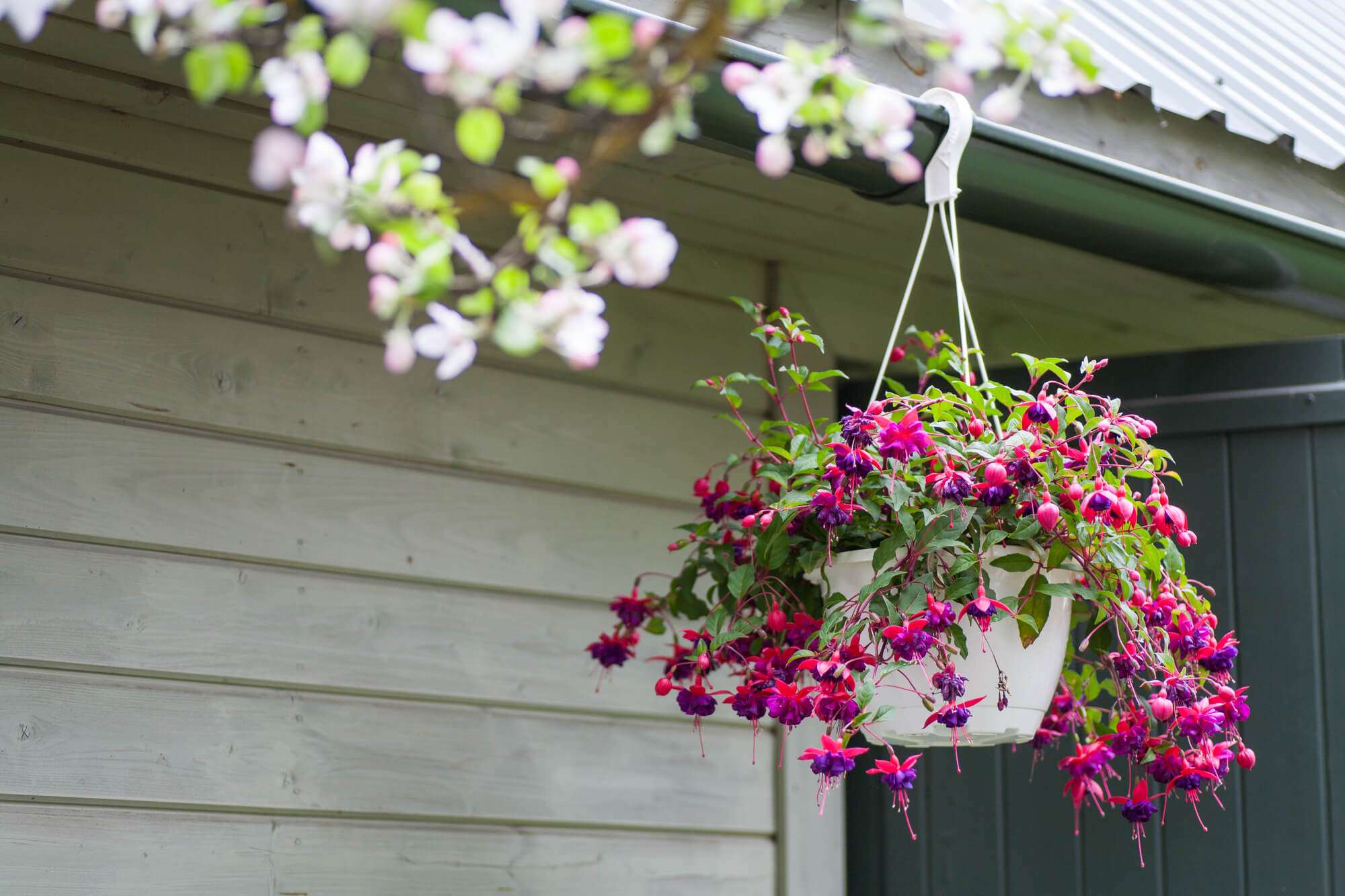 Have you ever thought of planting your bleeding heart in hanging basket? Bleeding hearts are the epitome of beauty, with their white bulbs hanging out of the heart-shaped petals. They’ll look beautiful outdoors and indoors, but the question is, can they grow in hanging baskets?

Follow this article for everything you need to know about growing bleedings hearts in a hanging basket!

Can You Grow a Bleeding Heart in a Hanging Basket?

Yes, bleeding hearts can grow in a hanging basket comfortably. As long as you fulfill their living requirements, they should be fine anywhere. However, it’s worth noting that bleeding hearts spread beyond their location.

In other words, you’ll have to make sure there’s enough place for them to extend beyond the basket. They should be able to grow beside each other without overcrowding, so that’s one thing to keep in mind.

On top of that, you’ll need to pick the right place to hang your bleeding hearts. They should be out of the wind’s way, and they shouldn’t be under direct sunlight.

How to Care for Bleeding Hearts in a Hanging Basket

To care for bleeding hearts in hanging baskets, you need to provide sufficient light, good soil, and water. Here’s a guide to the plant’s needs when grown in a basket.

Bleeding hearts need well-aerated soil with plenty of organic matter. They thrive in humus-rich soils, whether they’re neutral or slightly acidic. Additionally, the soil should be well-draining because the flowers don’t like getting their roots soggy.

These plants need loose soil because their roots spread wildly. So, they should have enough room for that.

You should also consider that hanging baskets will cause the soil to dry out much faster than outdoor soil. The soil should have a chance to dry between watering, but it shouldn’t be drought-dry.

Bleeding hearts need watering once a week, depending on the humidity ad the surrounding conditions. They need at least one inch of water weekly, but make sure not to drench the roots because they may rot.

Generally, bleeding hearts are drought-tolerant, so giving them less water is better than giving them more water than they need. They need their soil moist but not too wet. It should have enough time to dry between watering, so you may want to dip your finger before watering to make sure the soil is dry.

Bleeding hearts need partial shade to thrive. If you’re growing them in hanging baskets, leave them in an area with plenty of dampened light. They shouldn’t be left under direct sunlight, or else their leaves will start wilting.

If you’re growing them outdoors, you can hang the baskets close to a tree or anything that’ll block some of the light.

Bleeding hearts thrive in temperatures between 55 and 75 degrees F. They don’t do well in low temperatures, but they’re tolerant of high humidity. If the surrounding weather is too dry, they may not be able to bloom.

Bleeding hearts may need fertilizer once a month or so. If you don’t want to use it, it’s fine, but it’s always good to give the plant a push to bloom.

Make sure to use a water-soluble fertilizer, and dilute it before using it on the plant’s soil. In addition to that, read the instructions label carefully before using the fertilizer to make sure you’re not overusing it.

Overusing fertilizer can cause the bleeding heart’s roots to rot and the leaves to turn yellow or curl.

Generally, these flowers aren’t heavy eaters, so they can thrive without fertilizer if their soil is good enough.

Can a Bleeding Heart Grow Indoors?

If you want your hanging baskets to stay inside, you can. Bleeding hearts can grow indoors comfortably if their soil provides them with enough nutrients. It should be organic, rich, and moist. If you can provide that, you can grow your bleeding hearts anywhere you prefer.

Bear in mind that keeping the bleeding hearts indoors may mean that you have to water them more than once a week. If your house is dry or the baskets are in a place that causes the soil to dry out quickly, you’ll need to increase the watering frequency.

The soil should be slightly dry between waterings, but it shouldn’t be so dry that the flowers stop blooming.

The Pros of Growing Bleeding Hearts in Hanging Baskets

Bleeding hearts constantly get attacked by snails. The tiny slithery pests will bite the leaves and create holes all around. Planting the flowers in a hanging basket will keep them away from snails and similar pests, like aphids.

When you have your flowers out in the garden, it can be hard to kneel and treat the soil or prune them. When you have the bleeding hearts in a hanging basket, you can easily access the soil and take care of the plant.

The Cons of Growing Bleeding Hearts in Hanging Baskets

Growing your bleeding hearts in a hanging basket, you’ll still have some disadvantages to worry about. Although they look pretty, they don’t come empty of cons.

When your plants are out in the sun, you don’t worry about how much light they’re getting. However, it’s not the same with plants in hanging baskets. They generally need higher maintenance because they’re not in their natural habitat.

They dry out quicker, so they need more watering. On top of that, they may need deadheading every now and then.

Wind may be the major disadvantage of hanging baskets. It can damage the leaves if it’s hard enough. Or, even worse, it may cause the basket to fall. At the very least, it can cause the soil to dry quicker than outdoors, which will cause the plant to need more water.

If it’s your first time growing bleeding hearts, or you don’t have enough experience, these answers to frequently asked questions may help give you some insight.

Your bleeding heart may develop yellow leaves if you’re not giving it enough water. The same goes if the humidity is too high or the soil is soggy. These flowers don’t do well with soggy soils, and the roots may rot.

Will my bleeding heart spread?

Most probably, yes. Bleeding hearts tend to spread beyond their pot or their designated place in the soil. That’s why they should be planted away from other spreading plants, or their roots will compete for nutrients.

They should have ample room in the soil to grow and spread their leaves.

Are bleeding hearts resistant to deer?

Yes, bleeding hearts are classified as deer resistant. That means you can grow them outdoors in suburban areas without fearing they’d get eaten. They’d be a good choice for your garden if you constantly suffer deer attacks.

If you want to grow a bleeding heart in a hanging basket, you can do so, but make sure you provide it with enough water and light. These flowers don’t do well under direct sunlight, so make sure to choose the right place for your hanging basket.

It’s best to keep them somewhere with partial shade or dampened sunlight.