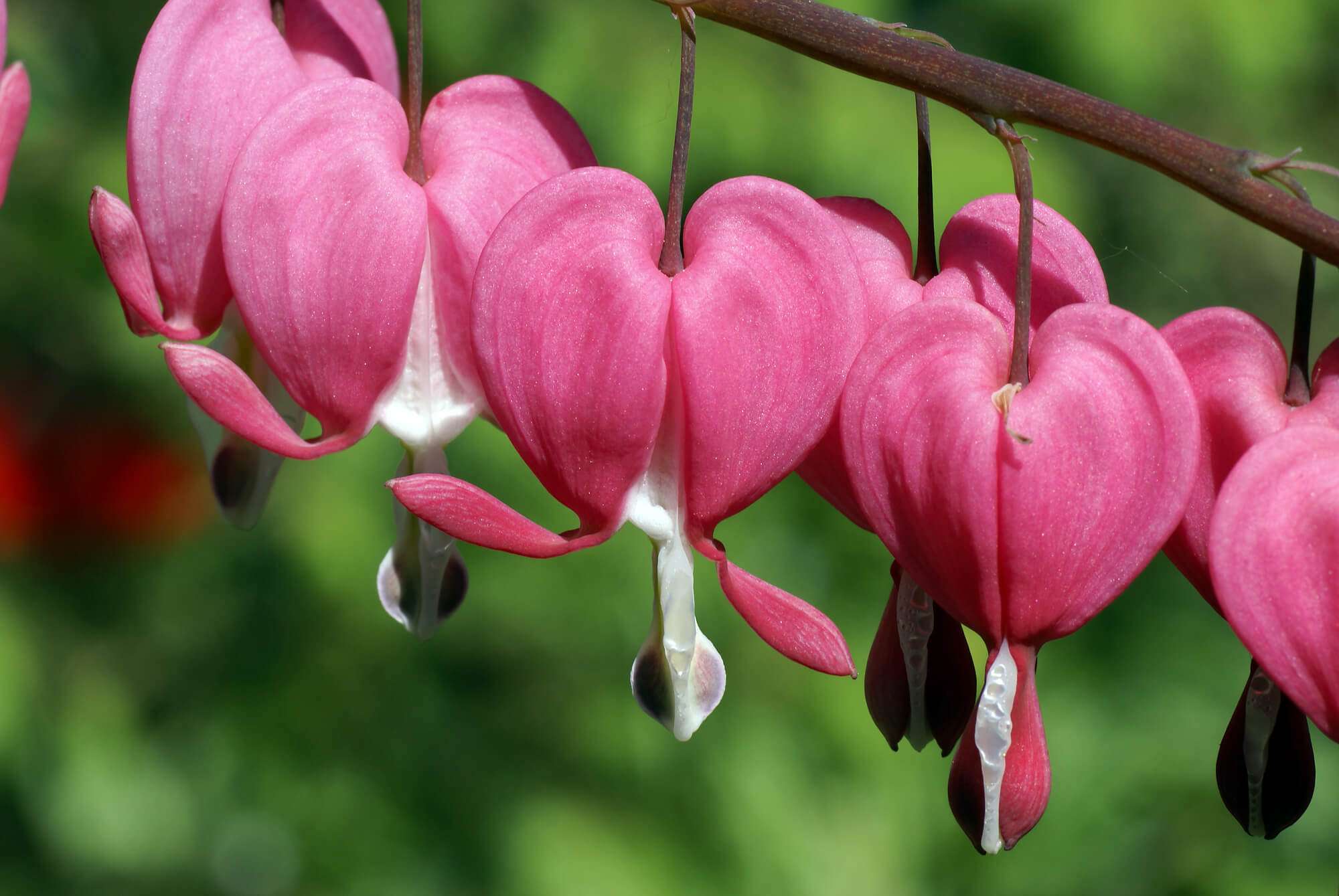 Keep reading to find out more about the significance of the stunning bleeding heart flower.

Where does the Bleeding Heart Flower Come from?

Before we get to explaining every possible meaning behind the bleeding heart flower, we should first talk about the origin of this lovely blossom.

The bleeding heart flower comes from Japan, north of China, Siberia, and some regions of South Korea. It wasn’t until the beginning of the 1800s that Europe was introduced to this fascinating flower by the Scottish botanist Robert Fortune.

In 1846, England was the first to witness the popularity of the bleeding heart flower after the Royal Horticultural Society brought it back to the country from its native home in Asia. The plant was a complete success as it quickly spread throughout English gardens.

From there, other European countries joined the fan club of the bleeding heart flower, which was introduced to North America soon after as well.

It wasn’t long before this gorgeous flower became a staple of gardens in the spring across Europe and North America wherever temperate zones are located.

The bleeding heart flower used to belong to the Dicentra genus. It was then called Dicentra spectabilis.

Besides the Asian bleeding heart, this flower has a bunch of additional common names such as lady-in-a-bath, Dutchman’s breeches, lyre flowers, fallopian buds, as well as locks and keys.

The Meaning of a Bleeding Heart Flower

Now that you’ve got a better knowledge of the background of the bleeding heart flower, it’s time we dive into all the possible meanings and symbolism behind this one-of-a-kind beauty.

Let’s start with the etymological aspect of the explanation to help you understand what the different names of this flower mean.

First, we got the most common name – the bleeding heart. This name is a direct reference to the way the flower looks.

You can conclude this by just looking at the flower thanks to how its petals have the appearance of the ‘heart’ symbol. The bottom section of the flower is elongated and almost seems like it’s falling from inside the petals as a drop of blood would drip from inside the heart.

When you flip the flower upside down, it’s quite obvious where its other common name lady-in-a-bath is inspired from. You’ll see the shape of the two inner petals clearly coming out of the two outer petals as if there’s a feminine human body sitting inside a boat or a bathtub.

Now, let’s turn to the scientific names. As we’ve mentioned earlier, the bleeding heart flower either belongs to the Lamprocapnos genus or the Dicentra genus depending on its origin.

The word Lamprocapnos is derived from the Latin words ‘lampros’ meaning shining and ‘kapnos’ meaning smoke. Initially, “shining smoke” doesn’t seem to describe any feature of the flower, but when you learn it’s a tribute to the bright colors of its petals that look like puffs of vibrant smoke, it makes more sense.

As for the word Dicentra, it’s a combination of the two Greek words ‘dis’ meaning two, and ‘kentros’ meaning spurs. “Two spurs” is a description of the shape of the flower where you can easily notice two outgrown stings or spurs.

There’s also the “spectabilis” part of the flower’s name, which translates into spectacular. There’s no need to explain why the bleeding heart got this name — one glimpse at it and you’ll agree it’s a sight to behold!

The bleeding heart flower can convey a wide range of feelings with just a look at its exceptional beauty. The emotional meaning behind this captivating bloom can be:

The most common color of the bleeding heart flower is pink outer petals along with white inner petals. That said, it exists in several other colors such as:

Each of these main colors has a meaning that can help you choose the most appropriate color for the occasion, so let’s take a look at them:

The bleeding heart flower also has a place in the biblical world. It’s a symbol of the grave loss that the Virgin Mary had to endure with the death of Jesus Christ.

As we mentioned earlier, bleeding heart flowers are expressive of the pain of losing a loved one, be it by rejection, separation, or death. In this case, the Virgin Mary’s sorrow as a mother losing her child upon the crucifixion of Jesus Christ is represented by the bleeding heart flower.

The presence of blood droplets also captures the injuries of Jesus Christ and the love that the Virgin Mary lost.

In the Christian religion, the bleeding heart flower is also a symbol of the Passion of Jesus Christ. It signifies the suffering that he went through to atone for the sins of his followers.

In the literal sense, the name of the flower is a manifestation of Jesus’s heart accompanied by blood droplets.

With its appearance and name, it shouldn’t come as a surprise that the bleeding heart flower is associated with various tales and legends. The two most popular cultural-oriented stories are tied up with one of the flower’s native countries — Japan.

The first tale involves a prince and his journey of pursuing the heart of a beautiful lady. To win her love, the prince traveled all over the world to collect rare and extraordinary gifts that he would present her with.

Sadly, his efforts went unappreciated as the lady brushed off his efforts. Months later, the prince came back to her after another long excursion and gifted her with two magical bunnies with pink fur.

He placed the bunnies on the two outer sides of a flower’s petal. Still, the lady wasn’t impressed and dismissed his gesture.

Unwilling to give up on her heart, the prince presented the lady with two slippers made of amazingly soft silk. She did accept the gift this time, but she told the prince it was impossible for her to feel love for him.

The prince didn’t get discouraged and took the fact that the lady accepted the gift as a positive sign, so he decided to try one last time with a gift. It was a pair of magical earrings that he hung on two long white flower petals.

Crushing the prince’s heart, the lady ignored the gift. Feeling the overwhelming pain of unrequited love, the prince grabbed a hidden knife and took his own life with a critical stab to his heart.

After some time, the very first bleeding heart flower blossomed right at the spot where the prince died. The lady saw it and immediately realized that she had lost her true love.

Tragically, she was late to recognize the prince’s love and would forever regret how she rejected him with a bleeding heart of her own.

The second tale is another version of the same story where a prince tries to conquer the heart of a beautiful lady. In this story, however, the prince presents the lady with 20 extraordinary gifts that she sadly doesn’t get affected by.

As each stem of the bleeding heart plant carries 20 blossoms, it’s believed that the flower symbolizes the broken heart of the prince and each blossom represents one of his fruitless gifts.

If you’re interested in myths -whether you believe in them or not-, then you’ll find this part pretty cool.

Just like the myth that a broken mirror brings seven years of bad luck (ancient Rome takes the credit for this one) or the one about a four-leaf clover bringing good luck, there’s also a symbolic myth related to bleeding heart flowers.

It’s based on the story that if someone takes a bleeding heart floret and crushes it, a liquid will come out from the flower.

That’s right, a lot is at stake here!

The bleeding heart flower meaning is generally that of deep emotion. It can be love, compassion, empathy, sorrow, the pain of rejection, purity, or even spirituality.

The bleeding heart flower even has biblical symbolism, a native legend, and a surrounding myth. It also comes in a variety of colors, each conveying a different sentiment.