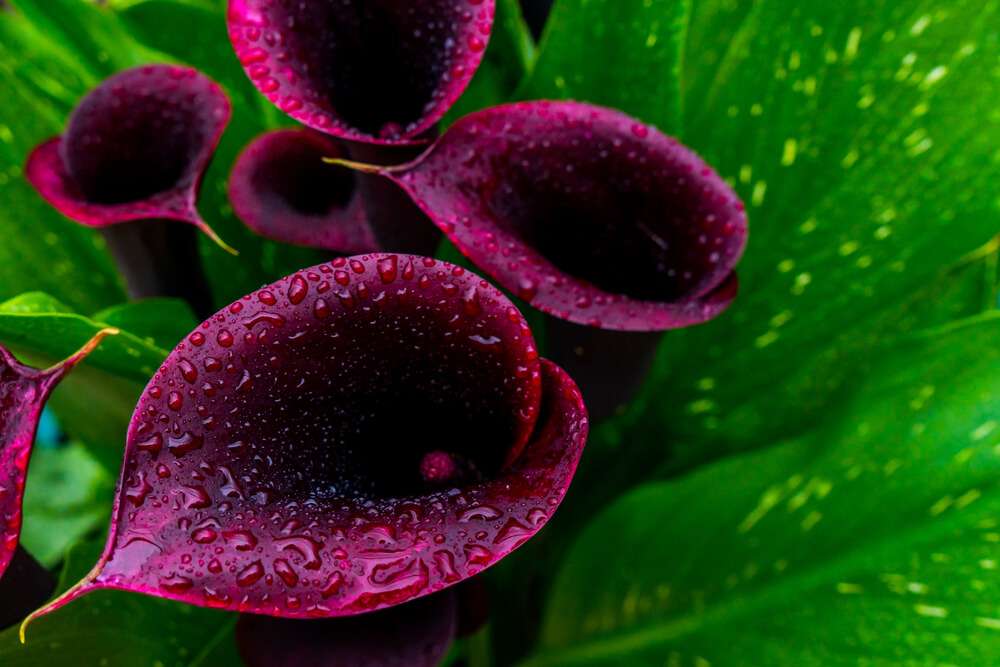 Calla lilies come in an array of colors, but the black calla is the rarest. They’re so rare that flower shops actually paint them black with floral spray paint sometimes. If you’re lucky enough to get your hands on black calla lilies, this black calla lily care guide will help you keep them blooming all year long.

Yes, black calla lilies do, in fact, exist; but not in the way you think.

Whilst they appear black in the distance, black calla lilies aren’t actually black but instead a deep maroon or purple color—much like the color of an eggplant or a black grape.

Black calla lilies don’t grow in nature. It was first cultivated in the Middle East through plant breeding and was advertised as a special ornamental plant in the early 2000s.

Since then, black calla lilies have been sold across the globe as a valued rare houseplant. In fact, they’re so rare that they’ve been dubbed as the crème de la crème of the calla world. They’re among the most desirable calla lily colors out there, their popularity close to that of white calla lilies.

The black calla lily, also known as the Odessa calla lily, is a broad, trumpet-shaped flower that houses a finger-like spadix in between its dark spathes.

Despite popular belief, the Odessa’s spathes aren’t the flower’s petals but rather its leaves, and the spadix tucked in between the spathes is the flower’s actual flower. The spadix is a light-to-dark lavender color, while the spathes are a deep purple, almost black color.

Like most black flowers, black calla lilies can be used as a symbol of death and mourning, metaphorical or otherwise, such as the death of one’s old self as part of a major life change.

However, calla lilies are rarely treated as black roses or other popular black flowers, mainly because of their connection to the Christian faith and Greek Mythology.

Despite the difference in stories, both recognize the calla lily as traditional symbols of devotion, divinity, and resurrection. As such, black calla lilies aren’t scorned or feared; in fact, they’re valued for their mystery and charm.

Black calla lilies are just as toxic as calla lilies of different colors. As they contain insoluble calcium oxalate crystals, they’re extremely toxic to pets and humans when ingested. When eaten, these crystals penetrate the tissues and cause pain, swelling, difficulty swallowing, and temporary hoarseness.

Although not fatal to humans, it’s often fatal to pets. As such, it’s advisable to keep calla lilies away from young children and animals.

Calla lily poisoning is rare but not unheard of, occurring in 1 in every 50 cases. Swallowing any part of the calla lily will result in an unpleasant and painful experience, but the roots are the most toxic parts.

Symptoms of calla lily poisoning include:

Avoid accidental contact by wearing gloves when handling calla lilies of any color.

If you believe you or someone you know ingested a calla lily, accidental or otherwise, call 911 or the Poison Control Center for further instructions. Don’t induce vomiting as the oxalate crystals may damage the throat.

Following ingestion, immediately drink milk to dilute the substance, but not if you’re vomiting. If the flower’s juice or pollen comes in contact with the skin or the eyes, wash thoroughly with copious amounts of water for at least 15 minutes.

If your pet ate the calla lily, contact your veterinarian or the ASPCA Animal Poison Control Center. Calla lilies don’t result in acute kidney failure like other lily species, but may still cause serious damage if not treated immediately.

Despite what their name suggests, black calla lilies aren’t true lilies. They belong to the Araceae family, alongside arrowhead plants, Swiss-cheese plants, and Jack-in-the-pulpits. As such, they have different care requirements compared to lilies.

Unlike other dark-colored flowers, like black dahlias and Black Jack gladioli, black calla lilies aren’t drought-resistant. They’re water-loving flowers, so they should be placed in moist, well-draining soil at all times.

Black calla lilies don’t tolerate dry or waterlogged soil, so following a regular and consistent watering schedule is key. Water the plant regularly, especially during summer, but no more than three to four times a week.

At the same time, ensure that you’re not overwatering your black calla lilies. Never let water collect in the pot or let the flowers sit in soggy soil. If you do, they may die from root rot.

Black calla lilies must be planted in rich, well-draining soil to prevent waterlogging. To ensure proper drainage, put your calla lilies in a soilless mix of builder’s sand or perlite, mulch, or pine bark. You can also use peat moss-based potting soil that’s well aerated and drains quickly.

Black calla lilies don’t require much fertilizer. However, you can add fertilizer to promote growth.

Use a balanced mild liquid fertilizer every other week, such as fish emulsion fertilizer, liquid tomato fertilizer, or bulb fertilizer, until your plants start blooming. Don’t overfertilize as doing so may harm their growth.

To preserve the beauty of your black calla lilies, wipe the plant’s spathes with a microfiber cloth or a soft brush once a month to remove dust and other markings.

When wiping black calla lilies, support the spathes with one hand and wipe carefully with the other. Make sure you get the undersides, too, as this is where pests usually like to hide.

Also, regularly check the flowers over for dead leaves or spathes. If you notice a dead or dry leaf, remove it with a pair of disinfected pruning shears or pinch the stems just below the base with your fingertips.

Pests aren’t a major issue with black calla lilies, but they sometimes get infected with aphids, spider mites, and mealybugs. Remove the pests by wiping down the leaves or spraying the plant with multipurpose fungicide spray or neem oil once a week.

Black calla lilies have midnight-purple spathes that look black in the distance. Although not as common as white or red calla lilies, they’re just as popular—if not more so. Black calla lilies are the rarest among all calla lily colors, as they aren’t naturally occurring.